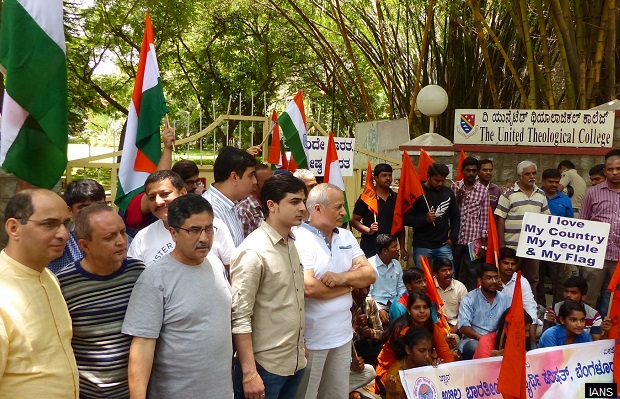 The police investigation against Amnesty International India—for slogans raised during an event the global advocacy organised—is the second such sedition complaint registered by the police in Karnataka this year after a complaint from the student wing of India’s ruling Bharatiya Janata Party (BJP).

The police charged two students with sedition in the southern town of Tumakuru on March 30, 2016, after the Akhil Bharatiya Vidyarthi Parishad (ABVP) accused them of raising pro-Pakistan slogans while distributing pamphlets supporting Jawaharlal Nehru University Students’ Union president Kanhaiya Kumar and Rohith Vemula, a Hyderabad University Dalit scholar who committed suicide. About 80 ABVP activists beat the two students with helmets and sticks, according to this India Today report.

In the Amnesty case, a first-person account of the Broken Families event speaks of a “heated but not threatening” meeting with diverging viewpoints from Kashmiri Hindus and Muslims in the audience. As the audience dispersed, ABVP activists outside stepped in.

“In slapping sedition charges, the police appear to have ceded to pressure from the large group of ABVP activists at the (police) station,” said Chandan Gowda, a sociology professor at Bengaluru’s Azim Premji University.

Sedition crimes recorded for first time in 2014, when BJP came to power

For the first time ever, the National Crime Records Bureau included data on crimes related to the 156-year-old sedition law in 2014, the year the BJP came to power. Sedition is a new category (section 124A of the Indian Penal Code) under a heading called ‘Offences Against the State’.

Karnataka registered no sedition case in 2014, although 47 such cases were filed across nine states that year, according to National Crime Records Bureau (NCRB) data. Jharkhand (18) and Bihar (16) registered the most sedition cases that year.

In June 2016, Karnataka charged two organisers of a protest demanding better working conditions for the police with sedition. Three journalists were arrested and booked for sedition in Karnataka’s Belagavi on December 3, 2015.

Source: National Crime Records Bureau; Note: Offences Against the State have been classified largely under two categories: offences against the state (under sections 121, 121A, 122, 123 & 124A IPC) and offences promoting enmity between different groups (under sections 153A & 153 B IPC).

Sedition falls under section 124A IPC (See Box Below), while sections 121, 121A, 122 & 123 constitute waging war or attempt/conspiring to wage war or collecting arms for this purpose, among other related crimes.

India shares the sedition law—once used by the colonial administration to imprison Mahatma Gandhi in 1922 and Bal Gangadhar Tilak in 1987 and 1909—with a variety of mostly authoritarian countries, such as Saudi Arabia, Malaysia, Iran, Uzbekistan, Sudan, Senegal and Turkey. The USA also has a sedition law, but many parts have been struck down over two centuries. Others, such as the UK, Scotland, South Korea and Indonesia have done away with the law.

Karnataka often uses a law often used in conjunction with the sedition charge—"promoting enmity between groups"—to deal with religious riots, which it experienced, per million population, more than any Indian state between 2010 and 2014, IndiaSpend reported in 2015.

Apart from sedition, the promoting-enmity law was coupled, in the Amnesty case, with "rioting" and "unlawful assembly", although the event was cleared by the police, which provided security. "The police were invited and (were) present at the event," Aakar Patel, Amnesty India's executive director said in a statement.

The ABVP claimed the event supported terrorism. The Amnesty Event showcased the stories of three families who lost kin to action by security forces, including extra-judicial killings, for which six soldiers were court-martialled and imprisoned for life in 2015. The fracas began when the audience disagreed over the role of the army, with Kashmiri Muslims shouting freedom slogans in response to Kashmiri Hindus defending the army.

"We don't know who shouted the slogans or who provoked them," Karnataka Home Minister G Parameshwara was quoted as saying. "If we find out that those who shouted slogans are connected to any terror outfit, we will rope in the National Investigation Agency. We will not tolerate any anti-national behaviour."

Gowda said the home minister ought to have clarified that slogans alone do not constitute sedition. The Supreme Court has frequently clarified that words and speech, criticism or slogans, however distasteful, cannot be considered seditious unless they incite violence.

“It is absolutely necessary to read the entirety of the law that penalises sedition, before whipping it out as a means of quelling free speech,” said Deeptha Rao, a lawyer with Bangalore’s Alternative Law Forum, a legal advocacy.

“Explanation 2 to Section 124-A of the IPC clearly provides that comments expressing disapprobation of the measures of the Government, with a view to obtain their alteration by lawful means, do not constitute the offence of sedition.”

Likewise, Explanation 3 to Section 124-A clarifies that comments expressing disapprobation of the administrative or other action of the Government do not constitute sedition. The event in question was meant to be a platform for remembrance of undeniable pain and suffering in the valley and clearly does not fall within the gamut of exciting hatred, contempt or disaffection towards the Government at law in India…we are clearly witnessing a disturbing trend of the invocation of an archaic law to suppress any speech or expression that brings to light the insecurities of the state and the stifling of democratic dissent.”

Amnesty’s Patel said: "Merely organising an event to defend constitutional values is now being branded as anti-India and criminalised."

Explanation 1.-The expression" disaffection" includes disloyalty and all feelings of enmity.

Explanation 2.-Comments expressing disapprobation of the measures of the Government with a view to obtain their alteration by lawful means, without exciting or attempting to excite hatred, contempt or disaffection, do not constitute an offence under this section.

Explanation 3.-Comments expressing disapprobation of the administrative or other action of the Government without exciting or attempting to excite hatred, contempt or disaffection, do not 'Constitute an offence under this section.