In 2016, India Had 4th Largest Number Of Threatened Mammal Species In The World

India, with 92 threatened mammal species, was fourth in a list of 218 regions across the world, according to data from the World Bank.

In 2016, six of 10 regions with the most threatened mammal species in the world were in Asia, in particular Indonesia, China, Malaysia, Thailand and Vietnam.

Indonesia, with 188 threatened species of mammals, was ranked highest. 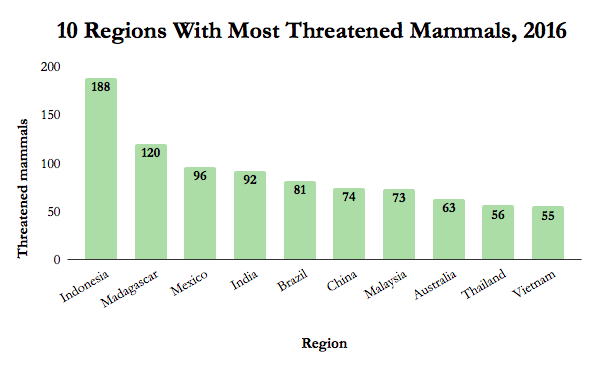 Notes: “Threatened" refers to species classified under the the red list categories of vulnerable, endangered or critically endangered by International Union for Conservation of Nature, a global environmental network.

Regions include 196 countries and areas like West Bank and Gaza, Virgin Islands (USA) and Macao (an autonomous region on the Chinese coast).