In 2016-17, India’s Derailment Death Toll Highest In A Decade 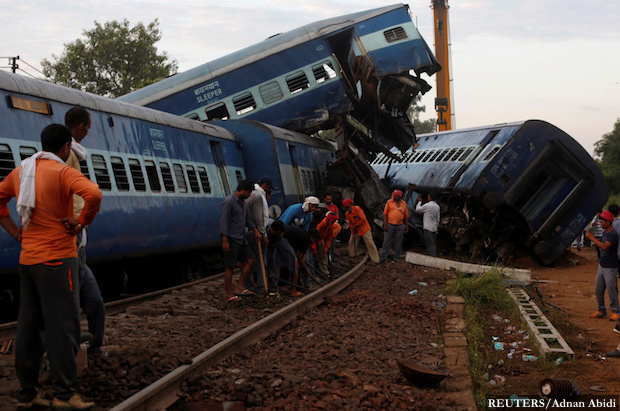 India’s death toll from train derailments in 2016-17 is now the highest it has been in a decade, according to an IndiaSpend analysis of data tabled in the upper house of parliament, the Rajya Sabha, on March 31, 2017 and August 11, 2017.

The derailment of the Puri-Haridwar Utkal Express on August 19, 2017, killed more than 20 and injured over 200 people.

The toll of 193 dead comes during a year that reported the fewest train accidents over 10 years (104) ending March 2017; 78 of these accidents were derailments.

As many as 1,394 train accidents were reported in India over the ten years we considered for this analysis. Of these accidents, 51% or 708 were due to derailments.

As many as 458 people have died due to train derailments over the last 10 years.

Track failures and subsequent derailments are caused by twin factors–excessive traffic and underinvestment in rail infrastructure, IndiaSpend reported on April 3, 2017.

As much as 40% of Indian Railways’ 1,219 line sections are utilised beyond capacity, we reported.