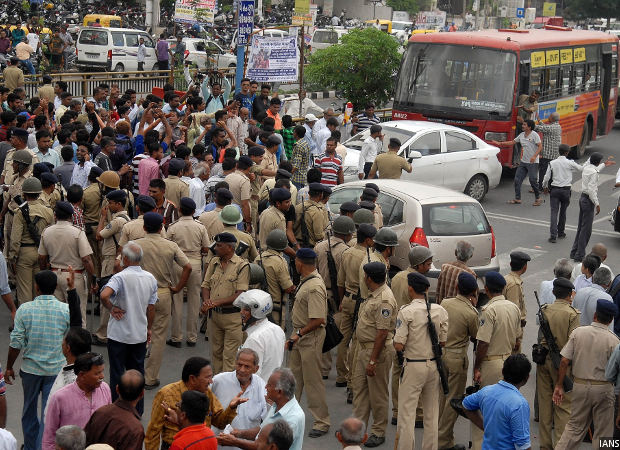 Dalits block traffic in Ahmedabad, Gujarat, after four men belonging to the community were beaten while trying to skin a dead cow at Una village in July, 2016. In 2015, human trafficking increased 42%, enmity between different groups 26%, road rage 10%, forgery 23%, theft 6%, according to data released by the National Crime Records Bureau.

More crime was reported in 2015 across India than in any year since 2005, when the National Crime Records Bureau (NCRB) started collating crime data from states.

The same crime rate in 2014 and 2015 hid many increases and decreases in crimes reported.

While rapes, murders and dacoities reduced, this did not appear to be for want of trying: Attempts to rape, attempt to murder and “making preparation and assembly for committing dacoity”, as the NCRB puts it, increased.

Poll-bound Uttar Pradesh recorded 2.8 million crimes for a population of 200 million, more than any other state; the crime rate was India’s second highest: 1,293 per 100,000 population.

Bihar and Jharkhand reported a lower crime rate than other large states—possibly a consequence of low reporting and registration of crime—although they topped in riot cases.

Uttar Pradesh is the only state that reported rapes in police custody, 91.

Observations From "Crime in India 2015' Report

Meghalaya leads in rate of murders reported, 5.4 per 100,000 population

Delhi had the country’s highest rate of kidnapping (33 per 100,000 population)

Tamil Nadu reports highest incidence of deaths due to negligence (22 per 100,000 persons), followed by Telangana (19)