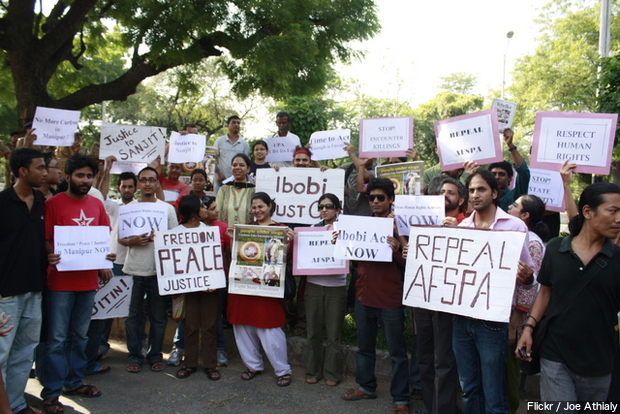 Protesters from the northeast stage demonstrations in Delhi against human rights violations under the Armed Forces (Special Powers) Act. The year 2015-16 saw least number of cases resolved in the last four years.

No more than five human-rights complaints—four in Jammu and Kashmir, one in Tripura—under a controversial law that provides immunity to armed forces from prosecution were judged in 2015-16, a 93% fall over the average of three preceding years, according to new government data submitted to parliament on July 21, 2016.

Four of the five cases adjudged this year were from Jammu and Kashmir, following the pattern of the preceding three years, when 105 of 186—or 57% of the total—cases disposed were from the state.

The government did not provide details of cases, victims and AFSPA violations and said it did not intend to withdraw the Act from the northeast or J&K.

Recent discussions in the Lok Sabha and the Rajya Sabha (the upper house of parliament) revolved around the abolition of AFSPA, promulgated in 1958 and extended to J&K in 1990. The law is now in force across some regions of J&K, Meghalaya, Arunachal Pradesh and Manipur, and all of Assam—where it was first imposed—and Nagaland.

The July 21, 2016, debate urged the government to send an all-party delegation to Kashmir to address mass unrest that has claimed 45 lives.

The Delhi and Gauhati High Courts have previously held that was not violative of fundamental rights. But the Supreme Court said in July 2016 that the armed forces cannot escape accountability, ruling that "over 1,500 cases of alleged fake encounters in Manipur, over the last 20 years, must be investigated”.

In J&K, about 43,000 people—including suspected militants, civilians and security forces—have been killed between 1990 and 2011, according to another Amnesty report quoted in DNA, a newspaper.

Tripura has withdrawn the Act from a limited region of the state.