In 2 Years, BJP Govt Electrified 13,523 Villages; Of These, Only 8% Were Completely Electrified 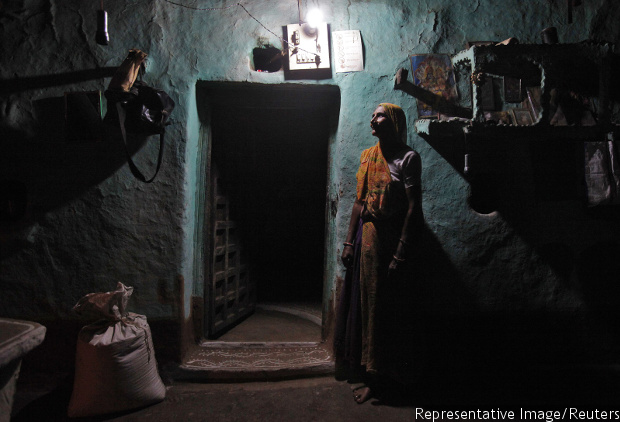 As many as 73% of the 18,452 villages that the Bharatiya Janata Party (BJP) government identified for electrification in 2015 now have power supply, but only 8% of these villages had all their households electrified, according to the government’s own data.

As of May 25, 2017, 13,523 villages have been electrified, but 100% household connectivity has been achieved in only 1,089 villages, according to data in the power ministry’s Grameen Vidyutikaran (GARV) dashboard.

Among the 43.5 million below-poverty-line households identified to be provided with free electricity connections under the Deendayal Upadhyaya Gram Jyoti Yojana, 23.5 million (59%) have been covered, and many geographically remote locations have been connected with off-grid sources of power. However, this kind of basic energy access does not provide larger benefits to recipients, and is not a substitute for grid connections, studies show.

Source: Central Electricity AuthorityNote: Data up to March 2017. Hover for details on number of inhabited/uninhabited villages in the state.

As such, household-level data is a better metric to assess citizens’ access to electricity. At the household level, several states such as Bihar, Jharkhand, Nagaland and Uttar Pradesh report less than 50% of their rural households have electricity supply, data from the ministry of power show.

As of May 16, 2017, while 73% of the 18,452 villages identified for electrification had power, as we said, only 8% of these villages had all their households electrified, according to data published by the ministry of power.

“Two challenges to electrifying households are: One, many poor households cannot afford to pay the upfront cost of connection, which ranges from Rs 2,000-3,000 depending on the state,” Abhishek Jain, senior programme lead at the Council on Energy, Environment and Water, a not-for-profit research institution based in New Delhi, told IndiaSpend. “And second, even if they get connections, the supply is far from reliable; so there is no incentive for rural households above the poverty line to connect to the grid.” This is because families below poverty line get free connections.

This suggests that the challenge of 100% electrification can only be overcome through concerted improvements at various levels--not the least in the income levels of rural households and in the reliability of power supply. 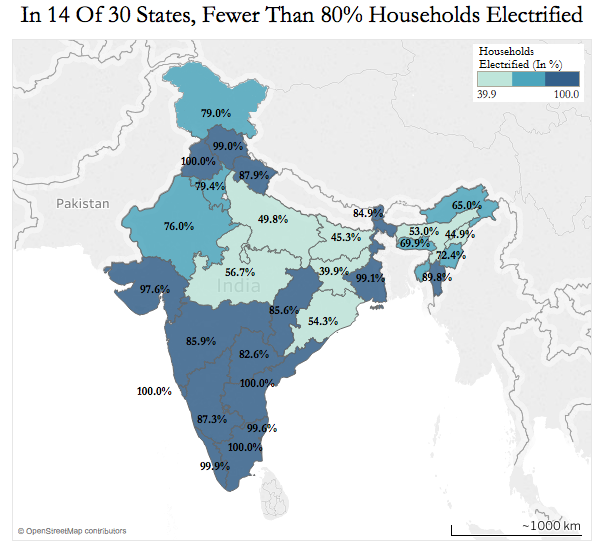 In 2014, when the BJP came to power, India had the world’s largest energy access deficit in terms of electricity--270 million people, accounting for just under a third of the world’s deficit, according to the World Bank’s 2017 State of Electricity Access report.

“Certain segments of India have been historically disadvantaged. Due to a lopsided development approach and skewed allocation of resources, they continue to lag behind the rest of the country in socioeconomic indicators,” the BJP had said in its manifesto for the 2014 general election, promising to ensure equitable growth and development by “Ensuring a basic level of Infrastructure to all - Home, Electricity, Water, Toilets and Access”.

Celebrating the achievement, power minister Piyush Goyal tweeted: “In the past three years rural electrification has witnessed an unprecedented change, and it is our aim to provide everyone with 24x7 power.” 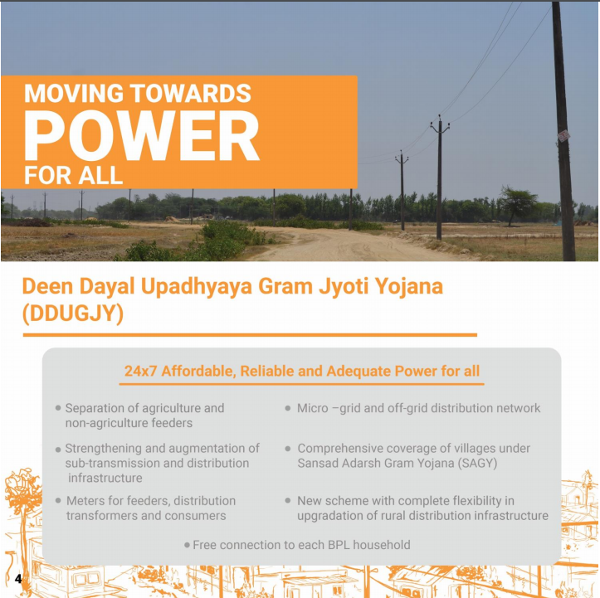 Of the 4,492 villages that remained to be electrified at the end of March 2017, 2,268 were scheduled for grid connection, 2,196 for off-grid electrification because of geographical barriers, and 28 for electrification by state governments, according to data from the Central Electricity Authority. 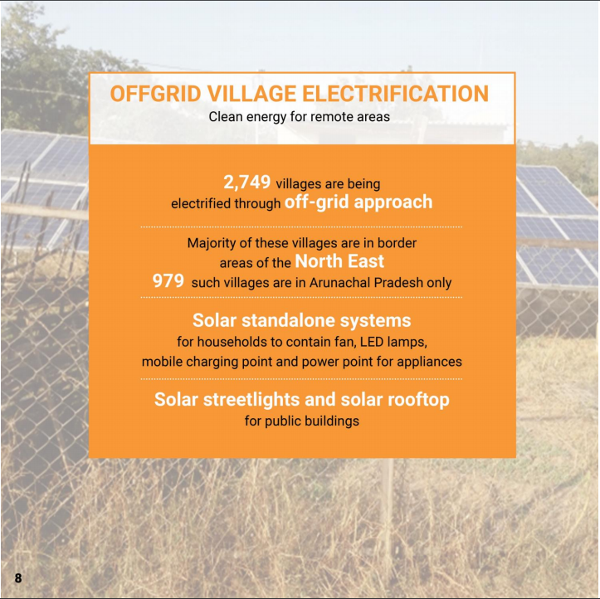 Studies have shown that decentralised solutions that provide consumers with basic energy access do not provide larger socio-economic benefits, and are not a substitute for grid-connected electricity, as IndiaSpend reported on May 18, 2017.

Once provided off-grid power and marked as “electrified”, a village provides lesser of an incentive to the government to provide grid connectivity, further dimming the prospects of villages that already count among the least developed in the country.

As part of the Deendayal Upadhyaya Gram Jyoti Yojana, the BJP’s rural electrification scheme, the government had also proposed to provide free electricity connections to over 43.5 million rural households below the poverty line (BPL, with the poverty line set at Rs 816 per capita per month for rural areas).

However, the connection these households get is often unreliable, and the two free-of-cost LED bulbs they are entitled to are often siphoned off to the black market by unscrupulous sub-contractors, IndiaSpend found during travels in villages of eastern UP.

As per the Modi government’s promise, all of India’s villages could be electrified by May 2018. However, it remains to be seen how many households will actually have access to reliable electricity supply. Despite villages having an electricity connection, true energy access remains low in many states, marked by poor quality, reliability and duration of supply, as IndiaSpend reported in October 2015.

This is the fourth of a five-part series tracking the status of the BJP government’s promises three years after it was sworn in. You can read the first part here, the second part here, the third part here and the fifth part here.

Tomorrow: How has the BJP government dealt with terrorism?