‘If You Destroy Aravalli Forests, Delhi, Gurgaon Will Be Devastated’

The Mangar Bani is a sacred forest on the edge of Delhi, in Faridabad. The Haryana government’s reluctance to classify tracts like these outside Gurgaon as Aravallis could endanger rare and rich habitats.

City forests sprawling across an area 189 times larger than Delhi’s Lodhi Gardens--or larger than south Mumbai--are at risk by a Haryana government's continuing bid to lift protection to 17,000 acres of Aravalli tracts. These forests, spread across some of world’s oldest mountain ranges, serve as lung space for India’s National Capital Region (NCR), one of the world’s most polluted regions and home to 46.7 million people, more than the population of Spain.

The northern edge of the 3-billion-year old Aravallis lies within and on the fringes of the NCR. A large section of these hills that nurture rare forests and habitats is now threatened by the real-estate boom in the NCR, which prompted the Haryana government to ​try and “limit” the Aravallis to Gurgaon. This means that it would not​ grant the status of a protected forest to tracts elsewhere in the state, especially Faridabad and adjoining districts.

At the latest hearing of the NCR planning board on December 6, ​2017, Haryana declared its intention to conduct ground verification in contested areas covered by the Aravallis in the state.​Haryana's argument ​has been that​ stretches of the range​ in Haryana outside Gurgaon are ‘gair mumkin pahar’ (uncultivable hills), undeserving of protection. That argument is rooted in a five-month-old dispute over a private housing project, which seeks to clear a 52-acre plot of mesquite trees.

Conservationists, activists and forest experts say the unique biodiversity and geology of the Aravallis, which extend 800 km from Champaner and Palanpur in eastern Gujarat to Haridwar in western Uttarakhand, deserves protection from real estate projects, mining, encroachment and neglect.

At the recently concluded Aravalli Utsav (festival) at New Delhi’s India Habitat Centre, forest defenders presented visual evidence of its ecological diversity. This includes the resilient dhau (Anogeissus pendula) tree that flourishes on steep, rocky slopes where little else survives, and wildlife that includes the leopard, the hyena, nilgai, jackals and avian raptors.

One of the richest surviving pockets of the northern Aravallis is Mangar Bani, a village at the edge of Faridabad district in Haryana, bordered by Gurgaon district to the west and Delhi in the north. A sacred grove, more than three-quarters of which is common land, it is now threatened by the Haryana government’s stand.

We speak to naturalist and author Pradip Krishen, who is a part of the campaign to save the Aravalli forests. 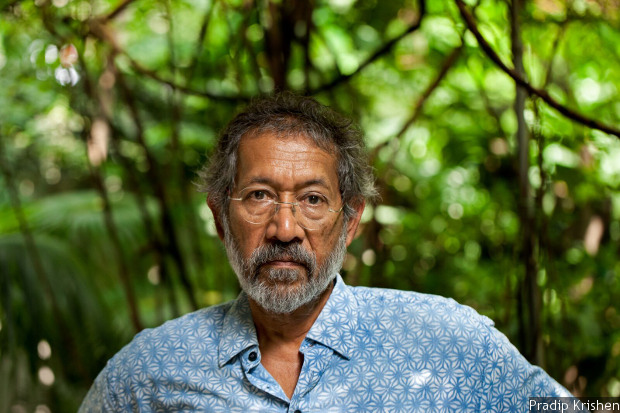 Pradip Krishen, naturalist and environmentalist, stumbled on the Mangar Bani and its ‘secret wilderness’ in 2002.

The Aravallis rarely figure in discussions on conservation at the national level. Why is it important to talk about its importance and the need to protect it from degradation?

Precisely because the Aravallis have attracted so little attention before. They are, in many senses, a 'local' issue to Delhi and Gurgaon, and that's why we've said the exhibition is about the 'northern Aravallis'. But the fundamental issue of urban metropolitan areas being insensitive to neighbouring countryside is universal in India. And the Aravallis and our neglect of them in the north illustrates this well.

I can't think of a single example of a metropolitan city in India valuing or protecting the natural areas that lie next to it. If you look at mega-cities like New York, it strictly protects and extends its remit over large parcels of wild areas adjacent to the city because these are its water catchments. The European Union mandates similar planning for cities within its remit. We do nothing of the kind, anywhere in India. Wild or semi-wild or agricultural areas that lie next to urban areas are regarded simply as vacant land to be incorporated into the city as it expands.

Because the vegetation here seems limited, most people--even nature lovers--think of the Aravallis as uninteresting. Could you elaborate on its ecological uniqueness?

We've all grown up thinking of the northern Aravallis being the same as Delhi's several ridges, and it's true that the ridges, everywhere you look in the city, are degraded and planted up with an invasive south American tree--vilaiti keekar--that shows up the ridges as low-diversity, unpretty places. This is the sad legacy of foresters from the 1920s onwards who knew no better.

It was only when we began to discover some of the 'secret wildernesses'--tiny pockets of relict natural forest--that had miraculously survived in Faridabad and Gurgaon that many of us began to completely revise our ideas about what the natural ecology of these hills was like. It was a revelation. I first ‘met’ Mangar Bani in 2002 and I don't exaggerate when I say that when I took people to see this little forest, they'd gasp with disbelief and joy. It's beautiful. We had professional foresters accuse us of 'faking' photographs when they saw pictures of this forest. 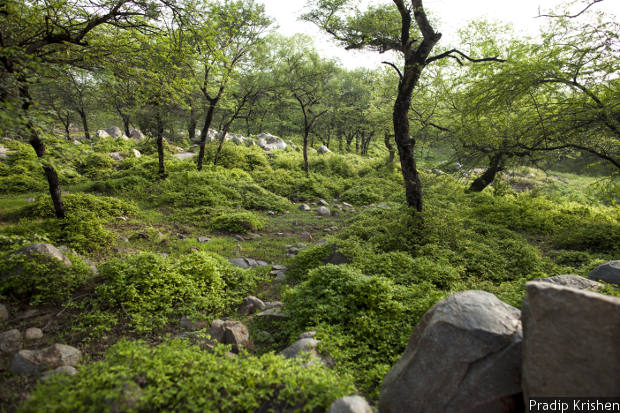 I first heard of Mangar Bani from an archaeologist, Nayanjot Lahiri, who said she'd found Mangar Bani on one of her forays searching for pre-historic settlements in the Aravallis south of Delhi. It made her gasp too. She sent me a map and I followed the route and was delighted to find a valley of natural wilderness that was part of the stormwater drainage of Faridabad. Three villages had come together to protect this forest in the memory of a baba they held sacred. The result was a natural forest that had survived intact in the midst of all the destruction that had been wrought by the invasive Prosopis juliflora all around.

What are the biggest threats to the Aravallis?

The spread of urbanisation. And bad spatial planning. And, of course, ignorance about how the Aravallis can 'help' Delhi and Gurgaon become better cities to live in.

We still use outmoded ways of planning our cities in India. We learned a particular methodology in the 1950s from British town and country planning and long after the rest of the world had abandoned these ways of planning, we continue to use trend-based planning. Land-use continues to be the fundamental issue that urban planning deals with, instead of looking at resources like water conservation, air quality, quality of life, and a whole range of other outcomes that cannot be achieved through mere land-use planning.

When we learn to plan in a modern way, we will need to place a premium on the countryside, on keeping it unsullied and pollution-free if we want to protect our cities. This consideration hasn't even percolated into our planning process. 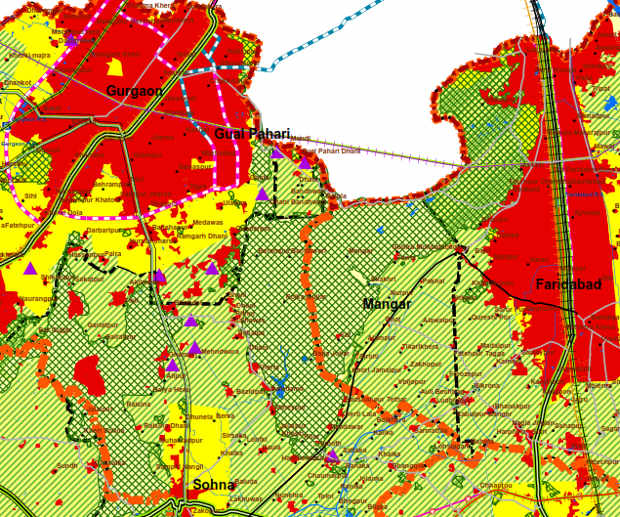 A map showing the national conservation zone in green, with the Aravallis clearly marked on them in both Gurgaon and Faridabad.

Can you give us an idea of the damage so far to the Aravallis due to construction or neglect over the last couple of decades?

I don't know how to quantify the damage. The stark fact is that Delhi and Haryana's forest departments seem to have no regard at all for their semi-wild forested tracts. Haryana continues to hold that Mangar Bani is not 'technically' a forest, which is absurd and flies in the face of the Supreme Court's definition of what a forest is. There are individual forest officers who have played a brave role but they face governments and civil servants who regard forests as vacant land waiting for development.

At the same time, the fact that the Central Ridge in Delhi is still intact--all 900 hectares of it--is an amazing thing. It means that so long as it stays protected, it persists as a protected area that maybe one day can be turned into one of the most amazing city forests of any capital city in the world.

Are the water bodies of the Aravallis under threat? Can you tell us something about their nature and origins?

Studies about the hydrology of this area show that the percolation of water into aquifers is a lot higher in the Aravallis. Something about the lineaments and cracks in the ancient hills make them an excellent catchment and studies have also shown that subsoil water close to the hills is less saline, and a lot less polluted. This fact alone should be reason enough to place a great value on the role of the hills. But think of this: In the last 30 years or so, archaeologists have been surprised by the fact that a number of Stone Age settlements have been found in these hills, close to Delhi. It's not where they expected to find settlements. Obviously, these places were well watered then. The Aravallis were sites of streams and lakes. They would have been forested too. We sometimes lose sight of that connection.

Why is it important for the Haryana government to declare Aravallis forests worthless?

Simply because if the government of Haryana were to acknowledge the importance of the forests, they wouldn't be able to open them up to so-called 'development'. It's silly, because the plain fact is that any kind of clearing of the natural forest in these hills will lead to devastation. Steep hills (like Mangar) are dominated by an amazing tree called dhau which is the only tree capable of growing on steep, rocky hills sides. Remove dhau, and the whole ecosystem will unravel. Nothing will be able to grow here.

Many parts of the Aravallis exist in close proximity with urban habitat. How do we deal with this?

By valuing and conserving them as catchments, by protecting them as fragile habitats, and making them part of the fabric of extra-urban land-use. But our governments and planners don't know how to do this.