If The BJP Calls Early Elections, Here Are The Underlying Mathematics

A recent article (“12 reasons why Lok Sabha elections could happen in the next 100 days”) by Rajesh Jain--the architect of the Bharatiya Janata Party’s (BJP) Mission-272 electoral campaign in 2014--has captured the imagination of political pundits, analysts and leaders.

Jain lists six reasons--and six inferences from recent events--for the 2019 Lok Sabha elections to be advanced and held as early as in May 2018.

The first and foremost argument is a declining trend in the BJP’s electoral performance since 2014 and hence an early election is the BJP’s best bet to arrest its loss. While Rajesh Jain’s arguments are intuitive and observational, what do the data tell us about a seemingly declining trend for the BJP?

There have been 15 state elections held over four years since the 2014 general election. One can impute BJP’s potential performance based on what economists call revealed preferences of voters in these state elections. This is very different from electoral surveys where voters are expected to answer questions to a pollster, which is fraught with various flaws, intentional or otherwise.

While the usual caveats of how state elections differ from parliament elections etc. apply, a revealed preference analysis of voter choices in state elections is a reasonable method to gauge the trend of BJP’s popularity with voters, after its 2014 victory.

Thus, if state elections are any harbinger for the next general elections, then the BJP is certainly on a declining trend, as the chart below shows.

Thus, the data support the claim made in the article about BJP’s declining support from its 2014 high.

Further, four large states-- Karnataka, Rajasthan, Madhya Pradesh and Chhattisgarh--are scheduled to go to polls later this year. These four states accounted for 79 parliamentary seats for the BJP in the 2014 elections. If the current declining trend of the BJP continues and is extrapolated to these four states, then the BJP can lose 20 more Lok Sabha seats in these four states, which will bring its total imputed Lok Sabha tally down to 217 seats by the end of this state election cycle. 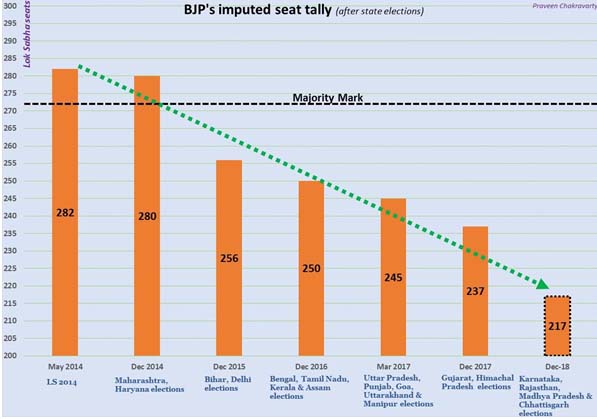 The obvious counter to this analysis will be the argument that voters vote differently for state elections and national elections. There is no empirical evidence to support this assertion. To be sure, this is not to argue that past state election results are definitive indicators of future Lok Sabha performance. But this presents a neater framework to understand trends in voter behaviour based on their actual past voting patterns rather than some spurious surveys that claim to represent voter preferences.

Further, my previous research shows that when state and national elections are held simultaneously, 77% of voters choose the same party for both. This further bolsters the argument about advancing Lok Sabha elections to be held along with other state elections, since it can potentially influence voter behaviour.

A version of this piece first appeared in The Quint.