If Only Exit Polls Were The Real Polls 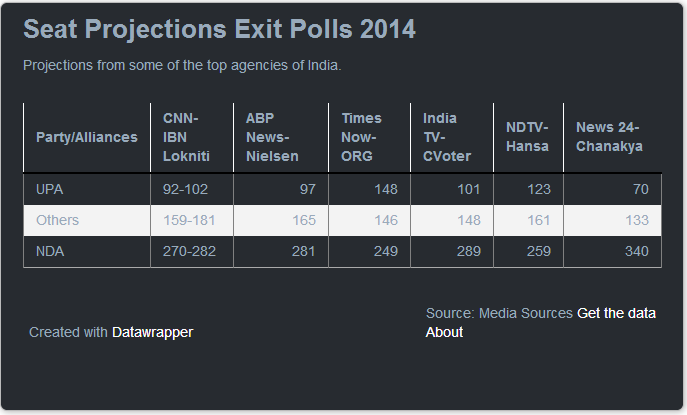 Various agencies have projected the seat share for the 16th Lok Sabha Elections on the basis of the exit poll surveys. The buzz is that BJP will lead the next government. Most of these surveys reveal that the NDA will cross the 272 mark comfortably. If these exit polls are to be believed, then the nation must feel relieved that there will be no post poll tussle between the various parties over ministries and positions in the government.

But, here’s a statutory warning! Exit poll projections have not always been accurate in the past!

The table below shows 6 different projections from some of the top agencies in India.

These are the projections for the current elections, but if we look at the past projections, we may have to question the reliability of the exit polls conducted in India. The 2004 projections were especially amiss. Most of the polls had predicted a high seat share for BJP led NDA. But ultimately the UPA I government was formed, led by the Congress. In 2009 again, the predictions for Congress were low but they did even better than 2004 in terms of seats. So, to what extent can we rely on these numbers?

Here’s a look at how inaccurate the past exit polls were.

It is interesting to note here that in both the surveys, seat projections for the UPA have been lower than the actual seats won. Meanwhile most of the projections for the NDA have been higher than what they actually got. So if history were to repeat itself in terms of exit poll errors, then there is a possibility that this might not be the BJP’s best performance ever and it might not be the Congress’ worst, which was in 1999, where they won just 114 seats.

The average error in exit polls for UPA in these two years was that of about 50 seats lesser than the actual. So, the average prediction for UPA in 2014 is about 108, so, we can presume approximately 158 (+/- 10) seats for UPA going by the past errors in projection.

In the same way, for NDA, the average prediction for the two elections has been higher than the average by approximately 40 seats. So, going by 2014 average of these exit polls the average seats NDA is getting are about 284 and if we reduce the margin from the last polls, then we can assign about 248 (+/- 10) seats to them.

Paranjoy Guha Thakurta, a Gurgaon based senior independent journalist in a conversation with Boom News, a digital television venture, hinted sceptically towards converting vote share of parties into seat share. He pointed out that in a ‘first past the post system,’ a high vote share may not necessarily mean a high seat share.

On the 16th of May the nation will come to know the actual seats. India, a multi-party democracy, has given a space to every faction in the electoral system. At one level, the vote share projection by these surveys is an indicator of the opinion of the people towards the various factions. Elections in India are not merely about who won how many seats, but also about how the various parties will work out stability in diversity.

Opinion surveys, therefore, do not serve the function of predicting seats won by various parties only. In a democracy, these polls hold another important function- of mobilising the voters, of voicing and spreading the public opinion. That is why accuracy is desirable in these polls. This is the reason why such surveys are encouraged in a democracy. They help in debating the implications of seats shares by various parties by the voters.