I didn't have enough money to do more for the common taxpayer: Arun Jaitley 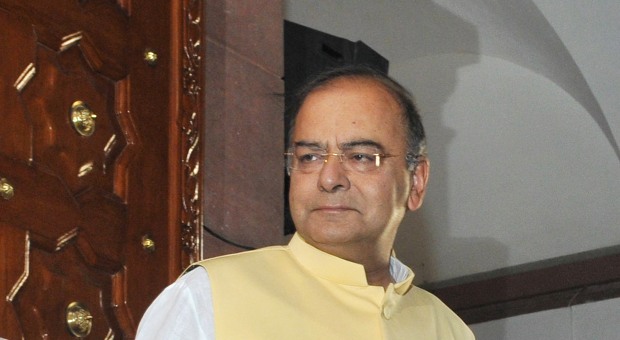 The primary objective of his government is to "rescue" the economy from concerns stemming from indecision, delays in project clearances and an unfriendly tax regime, Finance Minister Arun Jaitley tells T N Ninan in an interview on Doordarshan after presenting his maiden Union Budget. Edited excerpts:

It is a difficult year but the Economic Survey has painted a fairly upbeat picture on growth. Some of your Budget arithmetic may come under stress if the economy does not do well.

I have based it on three-four considerations outside the Budget document. The Indian economy had acquired a lot of buoyancy. We were around nine per cent (annual growth) for years. Then, people started losing faith in us in the past three-four years - we couldn't decide and clear projects expeditiously, our tax policy went haywire, we taxed people retrospectively, people were uncertain of the extent of tax they had to pay.

The global investing community is now showing a renewed interest - they are not investing but looking back at us. The domestic investors, who were looking outside for better avenues, are willing to return if you create a conducive environment.

As far as large investment is concerned, some of the doors that were closed are being opened - insurance and defence, for example.

Are you sure you will be able to carry it (raising the foreign direct investment cap) through in insurance?

I am quite certain. Insurance has gone through a strange journey but I hope we will be able to carry it through. I am sure the Congress party, having pressed for it for so many years, will not alter its position.

Well, you changed your position. They might change theirs...

People now watch very closely. We didn't rule out 49 per cent (FDI limit) at any stage. Even when Mr Chidambaram was speaking to us, different formulations were discussed. My present proposal, probably, will be much better. We also looked at townships, real estate and encouraging the housing sector. The increase in housing-loan incentive is intended in that direction.

REITS couldn't come about because there was no pass-through tax facility available. I have given it to them. Two weeks ago, I announced some measures for the manufacturing sector, extending Mr Chidambaram's concessions by six more months. I have no hesitation in saying we are not a government that believes you have to raise taxation to collect more. Nobody will come in, so you will probably collect nothing. You need to reduce the slabs, expand the base and enlarge the economic activity. The common citizen has to be incentivised to spend more and save more.

My tax proposals have kept this in mind with regard to an average taxpayer. I have also kept inflation in mind. I had a very important challenge: How to clean up the issues pending during the previous government? In the opening part of the Budget speech, to the extent it was possible, I gave a road map, with specific proposals, not only hope. There are still variables - if the oil prices zoom or we have a very bad monsoon, I will have a setback. But somebody had to set the direction.

So you are saying your optimism about the economy is grounded…

We have done so much, so now people have to come back - investors will come back and the economy will pick up.

There were comments in the run-up to the Budget that the previous year's account had a lot of unspent money which was not accounted for and the spillover would affect this year's numbers. But you have actually kept the deficit under control…

I have kept the deficit under control and I have also…

Is there a spillover?

You see, there will always be some spillover. For instance, a large part of the expenditure of the fourth quarter will always reflect in the next year's Budget.

That's what Mr Chidambaram said… there could be more…

Tax refunds could be the other. Now, there are some facilities which the finance ministers have in keeping the red lights in place.

So you don't think it is a stress point?

It is, if I am confronted with unpaid bills. Ever since I have assumed office, I have not made any negative remark about my predecessor… they also had a challenging situation. I am glad that Mr Chidambaram himself has said the Economic Survey is an appropriate economic document, rather than a political one. So, my job now is to look ahead, not back.

You've announced an overall increase in expenditure. You have even put in a rise in subsidy payments and the general expectation was your government would attack subsidies.

How do you rationalise the subsidies? Last week, the prime minister held a detailed meeting on how to do it. We are looking at every proposal with an open mind. As far as the subsidy bills are concerned - on food, for instance - most states have not even got their lists ready.

But you are still providing for a higher subsidy than the interim Budget?

We are providing for it because we have to, as far as actuals are concerned. In November, when we reassess the grants, we will realise how much we are able to save. We still have to undertake some of the expenditure because I have a lot of liability with regard to, say, Andhra Pradesh and Telangana. All that will come out of what has been saved.

You are also the defence minister. And you have increased the defence acquisition budget by Rs 5,000 crore from that in February…

Among big issues debated in the run-up to the Budget was retrospective taxation. You haven't actually done anything about the existing cases. You have said let them run their course. You haven't strictly ruled it out even in future.

I can't let the Budget speech take away the jurisdiction of Parliament, which has the authority to legislate, even retrospectively. The best I could do is to say our government doesn't believe in this and, ordinarily, we are not going to have retrospective taxation that creates a fresh liability. The word is fresh liability. So, I have done two things: For the future, I have said we don't believe in this, so we will not be doing this. If fresh notices are being issued under the old law of 2012, the assessing authority has to go back to the Central Board of Direct Taxes (CBDT), which will lay down policy guidelines on how to examine it. We don't want any new problems on that front. So far as the old problems are concerned, those are pending in courts or tribunals, and will probably run their course. When they do, we will follow verdicts that come.

You think this will put people's concerns to rest?

India needed to give a message that it has a civilised jurisprudence and tax policy. Therefore, I could not just go on criticising the previous governments and do nothing about it. I have left one part of the problem to be settled by a judicial mechanism. On the other two parts, I have given a comfort level and hope people will have faith in the Indian economy and its decision making.

You also increased your assumption on revenue from disinvestment. You are already into the fourth month (of the financial year). This is an all-time high disinvestment target. What gives you the confidence that you will be able to meet it?

There are a large number of public-sector companies where you have a flexibility of divesting four-five per cent or seven-eight per cent. And those transactions have reached a fairly advanced stage. The market is at an all-time high and it is a great time to divest.

Apart from hitting products that are seen to have a negative impact on health, you have hit mutual funds...

I have not hit mutual funds. Figures revealed that most investors were large companies and the concessional tax rules were being used for hedging. This was not the (original) purpose. The idea was to give tax relief to the small investor, not to a large company that just parks its money. CBDT was very particular that this provision would be misused by a few.

All these options are considered and you make a conscious choice. The most important part of this Budget is the first 20 pages of my speech. If you are able to carry those, you try not to upset the apple cart for the rest. I have always said you cannot create a hostile environment and then say reforms must go on.

I hope we are able to get back our (high) growth rates. So far as the common taxpayer is concerned, I do believe we can do much more for him. I didn't have enough money to do it.

I don't know, I hope I have more money next year.