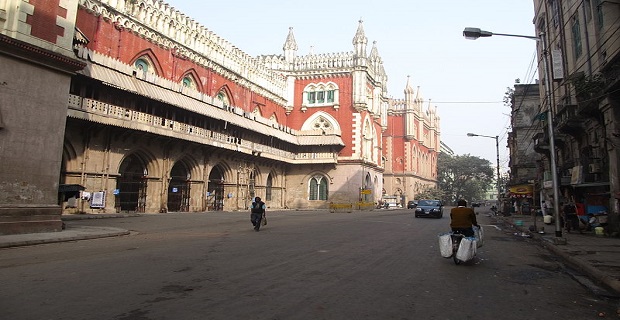 *West Bengal and Maharashtra register large number of cases but convictions have only been about 4% & 5%, respectively

Interestingly, United Nations Office on Drugs & Crime (UNODC) released a report recently highlighting the issue of human trafficking in India, and measures taken by certain states to contain the problem.

This article will be confined to the specific problem of trafficking of women and children for sexual exploitation. According to data released by National Crimes Record Bureau (NCRB), a department under the Ministry of Home Affairs, 72% of the total cases registered for sex trafficking of women fall under the Immoral Trafficking (Prevention) Act (PITA). Procuration of minor girls accounts for the second largest number of cases reported for human trafficking in the country.

But the major problem in most states is low conviction rates in cases of human trafficking. While states like West Bengal and Maharashtra have registered a large number of cases, convictions have only been about 4% & 5%, respectively.

NCRB collects data under the following heads of crimes related to human trafficking:

(ii) Importation of girls from foreign country (Sec. 366-B)

The maximum numbers of cases of sex trafficking are reported under Immoral Trafficking (Prevention) Act (PITA) with 2,563 cases reported in 2012 out of the total of 3,554 cases. PITA bans the trafficking of women and girls for the purpose of prostitution and sexual exploitation but does not cover other forms of trafficking like domestic help, child labour, organ harvesting etc. Indian Penal Code Sections 366-A & B, 372 and 373 also relate to sex trafficking.

A large number of cases are reported under Section 366-A for inducing minor girls (under 18 years) into trafficking for sexual exploitation. While 809 cases were recorded in 2012, it was a decline by 6.3% from 2011.

As we can see from the table below, cases under various categories are declining except under PITA, which increased by 5.3% in 2012. 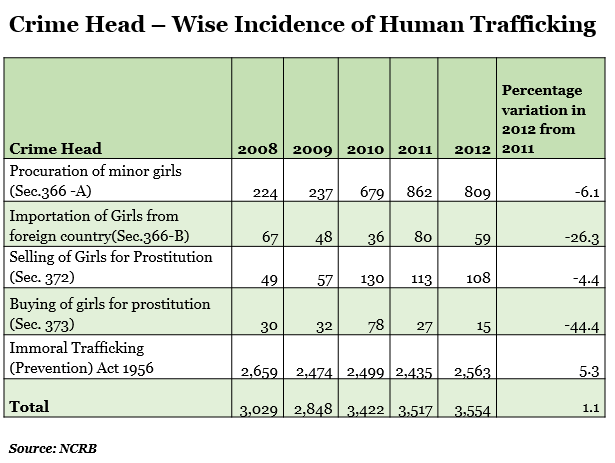 The highest number of cases of sex trafficking is from West Bengal with 549 cases in 2012. But unlike other states, West Bengal has more cases of procuration of minor girls than PITA cases. Other states with high number of trafficking cases are Tamil Nadu, Andhra Pradesh, Karnataka, Maharashtra and Kerala. 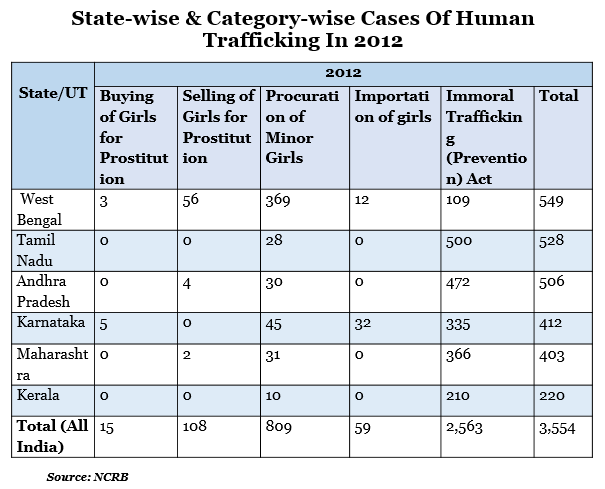 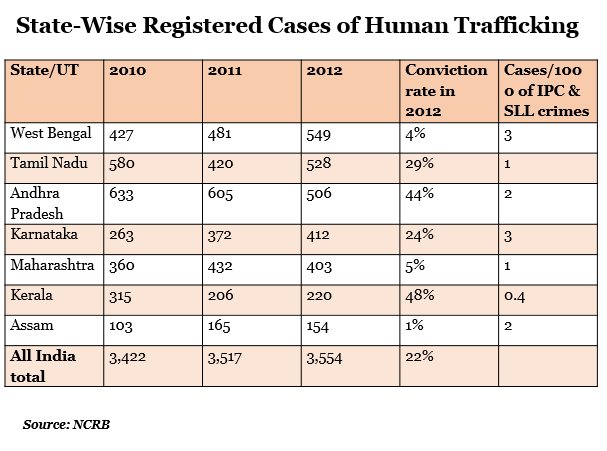 Kerala and Assam, which are smaller states, are also on the list. While Assam is showing a downward trend, Kerala is showing an upward trend.

Prosecution of Cases of Sex Trafficking

What we must look at, however, is the worrying conviction rates of these cases.

Here’s another way to look at the numbers: West Bengal and Karnataka have 3 cases of sex trafficking for every 1,000 IPC & SLL cases registered in the states. Tamil Nadu, Maharashtra and Kerala have 1 case each for every 1,000 cases… interesting to note is that Goa and Manipur have the highest ratio of sex trafficking cases; this could be because these states have the lower number of cases being registered. 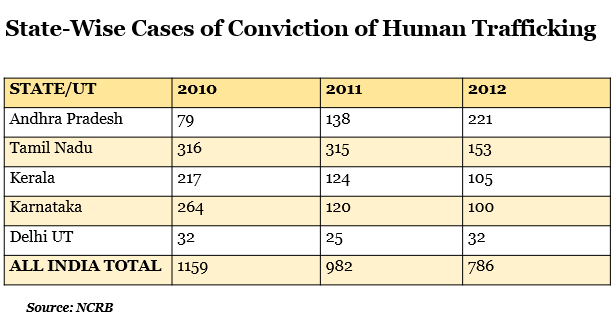 The police arrested 25,730 people all over the country in 2010-12 for sex trafficking. Among the persons arrested, 6,123 persons were convicted, a conviction rate of 24%.

If we discount North Eastern states like Manipur, Mizoram and Nagaland where there are few or no arrests, Uttar Pradesh, with 73% conviction rate, tops the list. U.P. is followed by Delhi with 68% but the number of arrests in U.P. and Delhi are not as high compared to Tamil Nadu, Kerala and Karnataka.

Kerala, despite being a much smaller state than U.P., seems to have more persons involved in sex trafficking - almost double from U.P. Karnataka also has a high number of persons arrested for sex trafficking but could convict only about 27% of those arrested.

Maharashtra, which recorded the highest arrests for sex trafficking for the period 2010-12, has a conviction rate of 7% - one of the worst in the country. 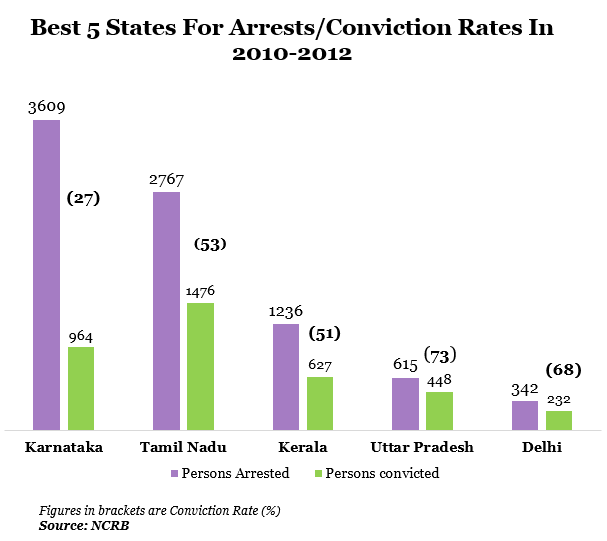 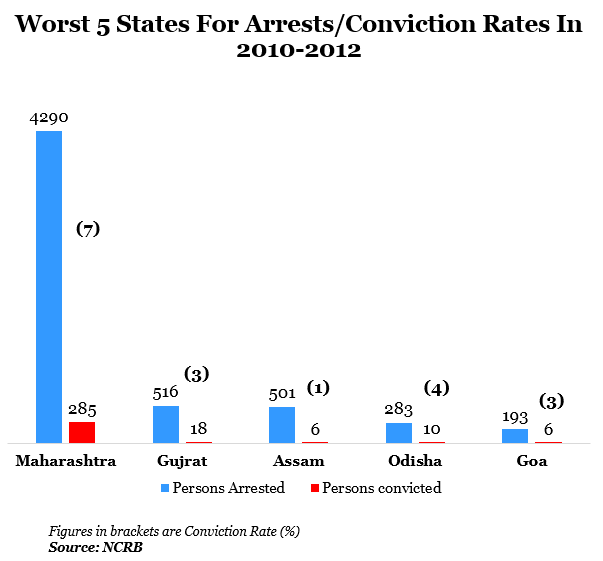 More Needs To Be Done To Arrest Disturbing Trend

One of the measures taken by the state Governments to control the problem is to set up an Integrated Anti Human Trafficking Unit (IAHTU), which is a special unit within the existing police machinery. The AHTU consists of one senior rank police officer of the rank of Deputy Superintendent of Police (Dy. SP) and other officers.

The US State Department said recently in its “Trafficking in Persons Report 2013” that North East India has emerged as a high source area for trafficking of women and children. Girls from Manipur, Nagaland, Meghalaya and Mizoram have been rescued from various trafficking rackets in Goa, Maharashtra, Andhra Pradesh and Karnataka.

The UNODC in their report also observed that over 1, 26,000 cases of child labour trafficking were registered during 2011-12. The data released by NCRB does not reflect this. This is a serious concern as the total number of trafficking is not being collected and reported.

What Is Human Trafficking?

The UN Palermo Protocol on trafficking defines it as “the recruitment, transportation, transfer, harbouring or receipt of persons, by means of threat or use of force or other forms of coercion, of abduction, of fraud, of deception, of abuse of power or of a position of vulnerability or of the giving or receiving of payments or benefits to achieve the consent of a person having control over another person, for the purpose of exploitation.”