How Women Are Increasingly Winning Parliamentary Elections In India & World Over 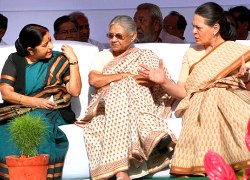 Before India’s southern state of Karnataka went to the polls in May for legislative elections, IndiaSpend had reported on the low representation of women in the state legislature.

When we analysed the data on women MLAs across India, we found that Bihar had the highest percentage of women MLAs, and, ironically, the lowest rate of female literacy. And the 2013 Karnataka assembly polls saw only 5 women elected to the Vidhan Sabha out of a total of 224 members.

Several state elections are coming up. So are the Parliamentary elections in 2014. How will women electoral contenders do this time round? Well, one thing is clear, the statistical trend is in their favour, globally as well as in India. Their numbers have been rising steadily over the years.

Let us look at the overall numbers of parliamentarians in the world first. 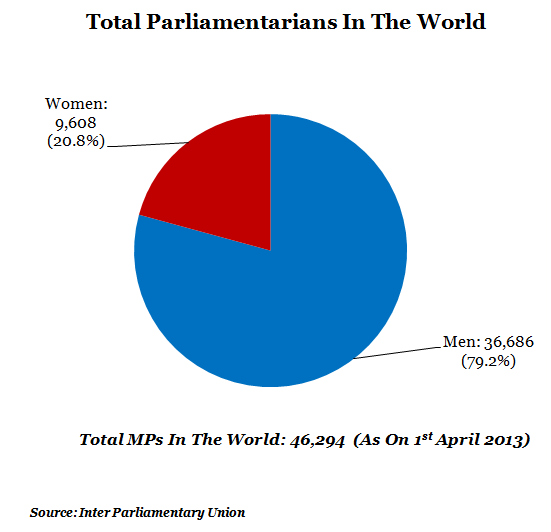 According to data maintained by Inter-Parliamentary Union, which maintains a record of women Parliamentarians, the world has only 20% women as political representatives. 10 years ago, the figure was 15.1%.

Comparably, India, at present, has only 11% women in the Lok Sabha, the popularly elected lower house of the Parliament. The last general elections were held in 2009, and the present Lok Sabha has the highest representation of women. Here’s a look at the data for all the past general elections. 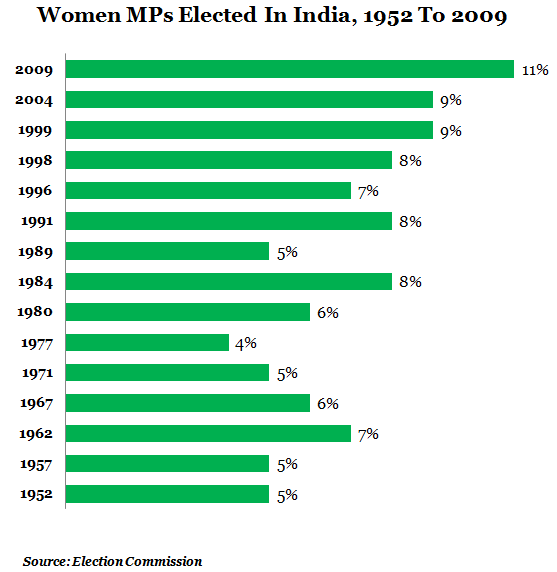 The issue of low representation of women will be brought up again as political parties start issuing tickets for the general elections next year as the Women’s Reservation Bill has been in limbo in the Parliament for years.

Let us now take a look at some of the countries with high representation of women MPs. 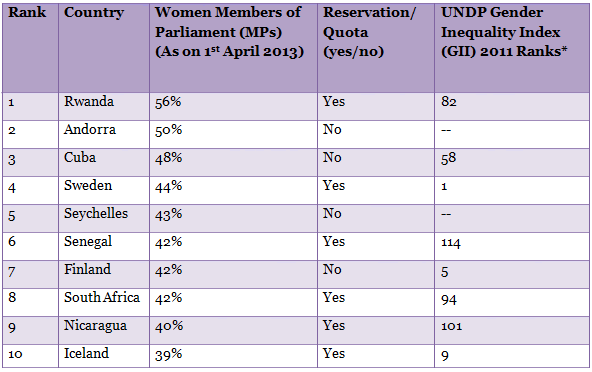 The top ten countries with the highest female representation are an assorted group. Four out of the top 10 countries do not have any form of quotas or reservation for women. (The UK-based Centre for Women and Democracy (CFWD) compiled a list of countries that have some or the other from of quota for electing women in Parliaments. The CFWD recognizes quotas of three kinds for women - in the constitution, in electoral laws and within political parties.)

Finland is statistically an ideal example among the top ten countries. There is 42% representation of women in the legislature, there is no reservation and the Gender Inequality Index places Finland at a favorably high rank.

Let us now look at India….

India’s ranking in the above parameters does not present a very good picture. The scores for women Parliamentarians as well as gender inequality are poor. China is one country which closely compares to India for socio-economic and demographic analyses. There is electoral quota for women in China. It is ranked 54 with 23% women in the national assembly. The GII rank of China is 35.

So, it is clear from a comparative analysis that quotas for women in politics have not essentially ensured higher equality. There is no simplistic explanation to the social and cultural influences on the position of women in politics in a country. Quotas have done their bit in securing equality for women in some nations. There are also countries that have secured higher representation for women without reservation in national politics. It has been 20 years since constitutional quotas were introduced for women in local governments in India. The effects of these quotas are still not visible in state and national governments in India. From 5% in the first general elections to 11% women representatives in the fifteenth Lok Sabha; how much better can we do in the coming national elections?