How Violence Contributes to Diseases Among Sex Workers 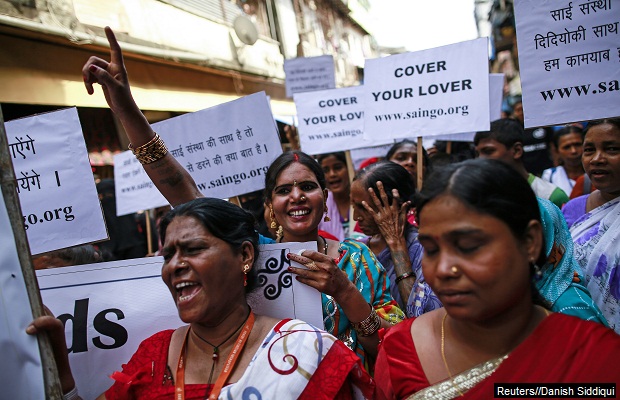 Anjana's working life and downward spiral began before she turned 15.

With an alcoholic father, mother and two younger sisters to support, Anjana (name changed to protect identity) started working at age 14 as a local doctor's assistant in the northern Tamil Nadu town of Dharmapuri. Later, as a housemaid at a lawyer's house, she was sexually exploited by her employer who put her in touch with pimps and made her trade sex for money. Anajana narrated her story to Sri Bhavani, a consultant with Swasti Health Resource Centre, a Bengaluru-based nonprofit.

By 17, Anjana—then a slim, quiet teenager--was a sex worker. During the course of her life, she has frequently been physically abused by clients, husband and partner, forced to have sex and today lives with HIV-AIDS, as does her husband. She now earns Rs 15,000 per month, but even this--as we shall see--is unlikely to make her life more peaceful.

Like Anjana, a fifth of female sex workers live with violence, attacked four times a month, on average, according to an analysis of data on 109,366 such workers, gathered over six months to September 2015 by Swasti as part of its work under the Avahan initiative (Phase 3).

Those with more clients and income were more likely to be attacked, the data reveal, which in turn placed them at greater risk of sexually transmitted infections (STIs), including HIV-AIDS. This could be because they were less likely to get tested.

As many as 24,815 women, or 22.7%, reported 92,838 bouts of sexual, emotional and physical violence against them in the six-month period of the survey, carried out in five states: Maharashtra, Andhra Pradesh, Telangana, Tamil Nadu and Karnataka.

As the data below show, violence inflicted on sex workers increases their risk of contracting STIs, including AIDS. While sexual violence has a more obvious connection to STIs, physical and emotional violence also play a major role in increasing their vulnerability.

Sex workers are among those most vulnerable to HIV infection, according to this 2005 World Health Organization (WHO) report.

"Violence has a direct and indirect bearing on sex workers' ability to protect themselves from HIV and maintain good sexual health," said the WHO report. While direct impact involves incidents of rape and forced sex, the indirect impact of violence manifests itself in the inability of sex workers to negotiate safer sex with clients, partners and other possible sexual partners.

In India, female sex workers have the fourth-highest HIV prevalence--the proportion of population with a particular disease at a specified point in time or over a period of time--among key risk groups, according to the department of AIDS control's annual report, 2013-14.

Why timely diagnosis is important

Anjana knew she and her husband had HIV-AIDS because non-government organisations (NGOs) associated with the National Aids Control Programme persuaded them to get tested.

She was started on anti retroviral therapy (ART), a cocktail of drugs that suppresses the virus and impedes HIV's progression. While her husband refused the medication, Anjana--who was pregnant by then--took it after a counsellor's persuasion. Her son, who is 10 years old today, did not contract the virus.

So, regular testing for STIs is important for sex workers and their children. But, as the Swasti study shows, violence impedes the chances that a sex worker will be tested for HIV.

Women who faced lesser violence also tended to be tested as the norm requires--two times a year which means every six months. 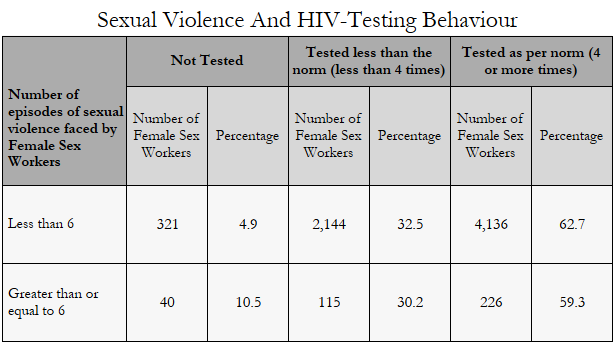 Poverty not only forces women like Anjana into sex work; it also makes them vulnerable to violence. More money and more clients, as already said, are correlated with more violence and STIs. 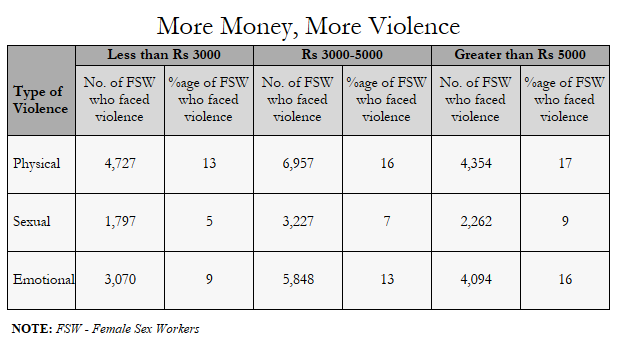 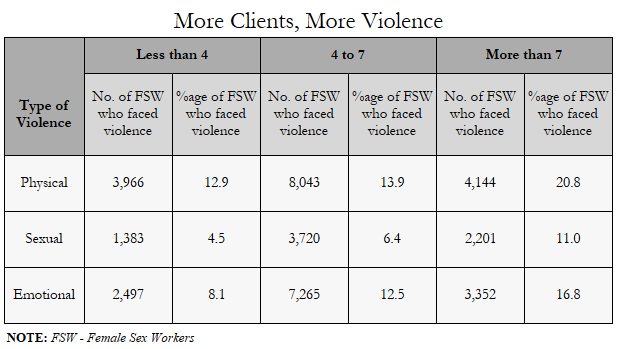 More than a quarter of sex workers are attacked by clients. As Anjana related, on some occasions while a single client approaches a woman, upon arrival she is confronted with the prospect of engaging with many more.

In such cases, reluctant sex workers are often forced to have sex without their consent, a fate that Anjana escaped twice. Spouses or husbands and partners or boyfriends also inflict violence. 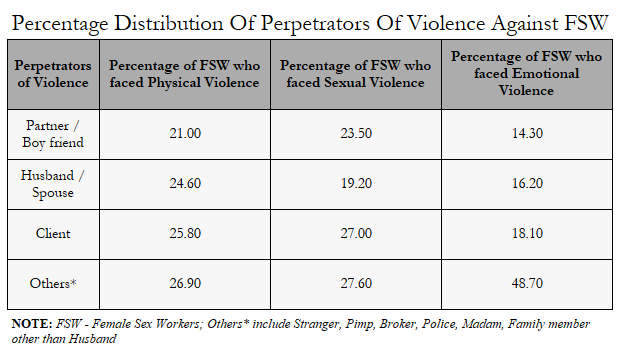 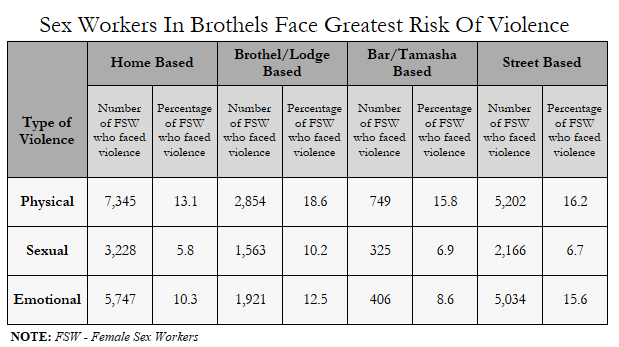 Sex work not a crime, so why do police and courts endanger the women?

Sex work in India is ambiguous legal territory. It is not a crime, but running brothels and soliciting clients are illegal under the Immoral Traffic Prevention Act (1956). The Act was established to curb trafficking and combat sexual exploitation for commercial purposes but police and courts increasingly interpret it in ways that lead to harassment, detention and arrest of sex-workers, endangering them further.

Anjana narrated how she has been forced to have sex with thugs and pimps, loosely called rowdies, without contraceptives, knowing the police will not step in. So, most sex workers do not report violence; if they do, between a fourth to a fifth choose community organisations--81% of sex workers surveyed were registered with such organisations--the data show.

Social support is important for sex workers to "challenge power relationships and structural barriers that contribute to their vulnerability", said this 2012 report in the British Medical Journal. It cites the ongoing Avahan initiative, to explain how community organisations empower sex workers, reduce violence and address healthcare discrimination.

Back in Dharmapuri, Anjana's priorities are to save enough for her son, whom her husband and in-laws have yet not accepted--and to live long enough to see him grow up to be a financially independent adult.

Update: The copy has been updated to reflect the correct HIV prevalence–proportion of female sex workers to the population.

(Chaturvedi is an independent media consultant with the Swasti Health Resource Centre, Bangalore.)