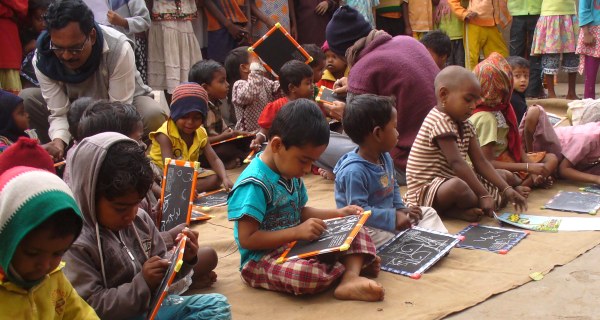 HIGHLIGHTS* Uttar Pradesh, Bihar are the slowest to utilise allocated funds.* West Bengal has the best completion rate out of the five states studied.

* Construction of panchayat buildings pushes health and education expenditure to the backseat.

India has many programmes funded by the union government for social and economic development. IndiaSpend’s Sourjya Bhowmick looks at the Backward Region Grant Fund (BRGF), which is being implemented by panchayats across 250 districts.

The main idea of Backward Region Grant Fund (BRGF) is to plug the gaps in infrastructure and development not met through existing central and state government schemes in backward districts and strengthen panchayat and municipal-level governance.

BRGF caters to 254 districts across 27 states apart from special plans for Bihar and the Kalahandi, Bolangir and Koraput (KBK) districts of Orissa.

BRGF includes two funding windows; a capacity building fund of Rs 250 crore per annum to look after planning, implementation and monitoring and an untied grant to be used at the discretion of the panchayats and municipalities to address the objectives of the plan.

The criteria for the distribution of funds include:

* Remaining 50% will be distributed on the basis of share of the area of the district in the total area of all backward districts.

The following table gives an idea about how much has been spent on BRGF since its inception in 2006.

An interesting observation is the difference every year between the Budget Estimates and the Revised Estimates. A decline of around Rs 1,000 crore is seen on an average every year since the start of the programme.

How Is The Money Used?

The focus of the panchayats while implementing projects under BRGF is to link them to various flagship schemes of the union government like the Pradhan Mantri Gram Sadak Yojana, the rural road progamme and the Mahatma Gandhi National Rural Employment Guarantee Act, the rural job generating programme. So, BRGF funds are essentially linked to the goals of Bharat Nirman.

The table below gives the details of the amount allocated to selected states for the last five years: 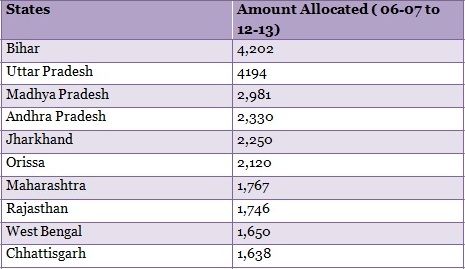 Uttar Pradesh Spends The Least , WB The Most

Now, take a look at the utilisation pattern till 2010... Uttar Pradesh had the most unspent balance (Rs 768 crore) followed by Bihar (Rs 542 crore). Surprisingly, Maharashtra has not spent a single penny from the allocated funds. West Bengal turns out to be the best when it comes to utilisation. 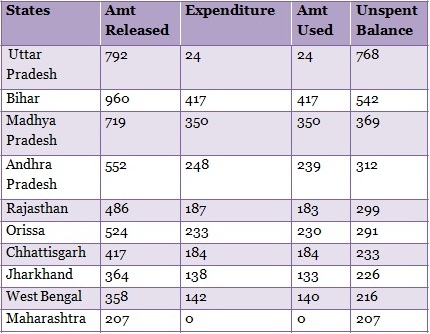 It can also be seen that Rs 3,463 crore has been the unspent balance for all the states together over three years. One important thing is that the fund goes back to the centre if the states are unable to utilise it.

So, what is the composition of the BRGF expenditure? 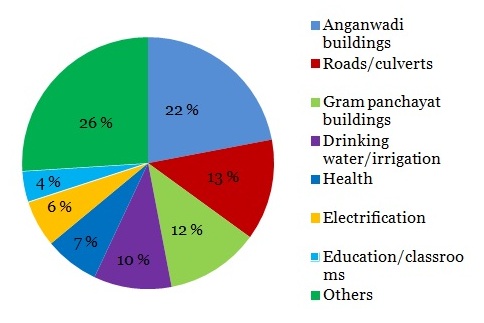 While there is no clear definition of ‘other’ activities, it includes projects under Indira Awaz Yojana and providing fertiliser to farmers. Moreover, the spending is not so much on health, education and electrification take a backseat as much as construction of panchayat buildings. The reason could be the discretionary powers of the panchayats while using the fund.

Let us now look at the projects taken up and the completion rate of a few states: 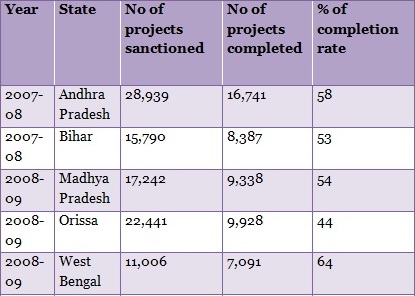 The table does not mention many states due to unavailability of data. However, from these five states, we can see that only West Bengal could cross a 60% completion rate.

We clearly see a trend: a huge amount of Rs 3,463 remains unutilised. This leads to money going back to the centre and development work getting slower and stalled.

The first review committee of BRGF highlighted the need for convergence on various levels for better co-ordination as well as more role for the district planning committee on disbursing funds.

Another issue is the criteria for disbursing the funds. A central government & World Bank report shows that there is no relationship between the per capita allocation to districts and the backwardness ranking used to identify the targeted districts. A number of well-off districts also receive money under BRGF going counter to the intent of the programme, which is to assist the most backward districts.