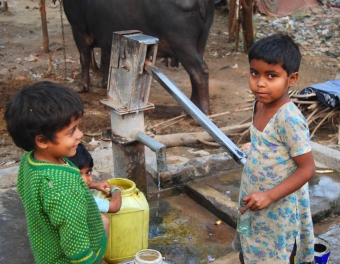 * 72% of rural habitation in India had access to safe drinking water in 2011.

* Close to 38 million people in India are affected by water-borne diseases annually.

* Over Rs 145,000 crore has been spent by the centre and state governments on clean water programmes.

Clean drinking water to all is now an important focus area for Governments, both Centre and State. So much so that a Ministry of Drinking Water and Sanitation was created and notified in July 2011 to take on the challenges of ensuring clean water supply and sanitation issues.

IndiaSpend’s Sourjya Bhowmick looks at the progress so far by analysing the 2011-12 annual report of the Ministry of Drinking Water and Sanitation.

A quick background. Close to 38 million people in India are affected by water-borne diseases annually, thanks to contaminated drinking water supply while an estimated 1.5 million children die of diarrhea each year, according to WaterAid, a UK-based NGO.

Now, some key findings from the report: While Orissa has been achieving its target of providing water to citizens for the last two years, Uttar Pradesh has the highest gap between target and coverage.

The all-India gap is more than 63,000 habitations, between target and coverage. While over Rs 145,000 crore has been spent since Independence by both the centre and state governments, 28% rural habitations still have no access to safe drinking water.

Let’s look at the plan-wise break-up of allocations to rural water supply. 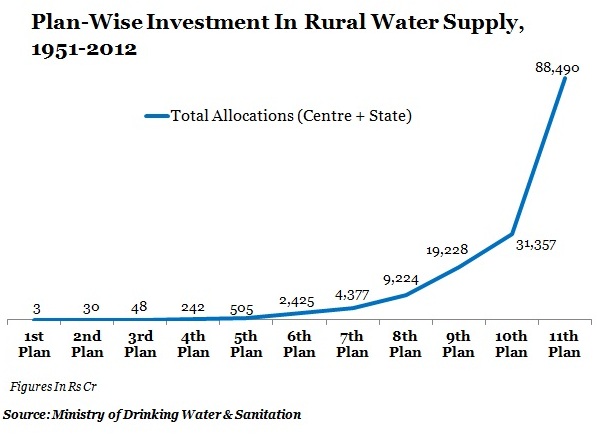 It is quite apparent from that the importance attached to providing clean drinking water in rural areas has increased over the plans: from the 10th to the 11th Plan, there was an increase of Rs 57,133 crore. While the overall trend of centre-state contributions for the projects is 60:40, states contributed over 50% during the 10th Plan (over Rs 16,000 crore out of total outlay of Rs 31,355 crore.)

Safe drinking water is accessible to habitations through various modes like tap water, tube well/hand pump and protected well. In India, 54.7% access drinking water through hand pumps while 30% have access through taps.

The situation isn’t bright if we see the state-wise accessibility to tap water. Some states like Tamil Nadu (87.3%) and Himachal Pradesh (80%) are doing really well compared to the national average of approximately 30%.

And there are 8 states - Bihar (the lowest at 1.1%), Uttar Pradesh, Jharkhand, Orissa, Assam, Chhattisgarh, West Bengal and Madhya Pradesh – that have less than 10% coverage of households with piped water supply.

The Ministry of Drinking Water and Sanitation’s programme to provide safe drinking water is known as the National Rural Drinking Water Programme (NRDWP).

The main goals of the programme include ensuring safe drinking water in all schools and anganwadis, enable rural community to monitor water sources and ensure equity like high priority or coverage in areas with SC/ST population.

Let’s now look at the physical achievements of the programme: 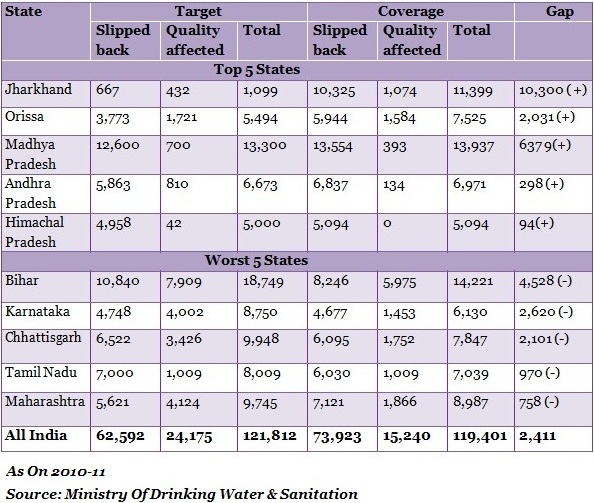 Slipped Back: Habitations that had slipped from full coverage and have been covered partially.

Jharkhand, generally considered backward in socio-economic indicators, turns out to be the best with much higher coverage than the set target. One reason behind this is the huge number of households that had slipped from drinking water access.

Orissa is the only state in the top 5 that achieved its goals in both 2010-11 and 2011-12. Surprisingly, there are only four states which have covered more than targeted. Maharashtra, which was among the worst performing states in 2010-11, did well in 2011-12 by achieving its stated targets.

The worst 5 states in 2011-12 are not much of a surprise, barring Jharkhand which was among the best performing in 2010-11. Incidentally, the all-India gap stands at a huge 63,240 habitations left to be covered based on the targets set. And around 10,497 habitations have access to drinking water but its quality is affected.

So, while nearly Rs 1.5 lakh crore has been spent till now to ensure clean drinking water to households across the nation, 4.6 lakh households are still waiting for its delivery. And over 11,000 habitations across the country are waiting for clean drinking water free of contaminants. The task becomes more challenging since the deadline to meet Millennium Development Goals is just a couple of years away.