How Much Is India Spending On Its Public Libraries?

Bengaluru: On a recent walk in Bengaluru, we found that a branch of JustBooks, a private lending library chain, had been relocated from an isolated stretch at a crossroads to a location facing a neighbourhood park in Kalyan Nagar in northern Bengaluru. While the earlier location did not attract too many visitors, the new one was filled with people of different age groups, many of them park-goers who had happened to notice the library for the first time. While models such as JustBooks attempt to foster a library culture through private investment, this was the role public libraries were meant to play—free and open spaces meant to provide information and access to information resources for all.

Public libraries were also meant to be well-funded; to be continuously upgraded and improve their facilities to keep up with the changing times, as we wrote in our 2018 paper, A Policy Review of Public Libraries in India. The library cess or public library tax, a surcharge of property tax paid to the local government, city corporation or village panchayat was meant to finance them. But the question arises: how much money is India actually spending on its public libraries?

We filed an application under the Right to Information (RTI) Act when we discovered, after analysing the data on public libraries, that there were no official documents available on per capita expenditure on public libraries. The RTI was redirected from the ministry of culture to several central libraries in the country including the National Library of India at Belvedere Estate, Kolkata, the Delhi Public Library, and the Raja Rammohun Roy Library Foundation (RRRLF), Kolkata. However, no information was forthcoming. While a few libraries were able to provide details of their individual expenditure, there was no information on annual national public library expenditure.

The first public libraries act, the Madras Public Library Act, was passed in 1948. Its goal was to introduce legal provisions for offering public library services, for the public and funded by the public.

India’s public library movement, which was pioneered by the likes of Maharaja Sayajirao III Gaekwad of Baroda, American library administrator William Alanson Borden, and mathematician and librarian S R Ranganathan, began in the late 19th century. The movement was part of pre-Independence social movements for literacy development that took place in several states such as Kerala and Andhra Pradesh, and included initiatives such as a boat-library in Andhra Pradesh, and books on bullock carts in the then Madras state. 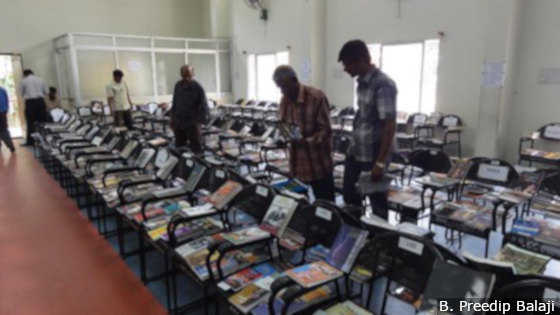 After Independence, there have been a few government initiatives for public libraries, such as the National Mission on Public Libraries, improving school library services as part of five-year plans for education and assistance, and provision of grants by the RRRLF for library programmes aimed at training and development. A few public libraries in villages and talukas have also been given financial aid in the construction of buildings and upkeep of facilities. However, these programmes have been ad-hoc and not administered with concerted efforts by the ministry of culture, which manages the National Library of India and the National Archives of India.

Several libraries remain in poor conditions with no concerted programmes--for example, Livemint reported in May 2013 on a poorly functioning district library in the West Champaran district of Bihar that housed 12,000 tattered books, managed by a librarian who was paid Rs 700 per month--the cost of a meal for one at a mid-range restaurant in a metro city. Nevertheless, several students visited the library daily to study for their exams.

There were 70,817 libraries in rural areas and 4,580 in urban areas serving a population of more than 830 million and 370 million, respectively, according to the 2011 Census where libraries were notified (officially identified) for the first time. These numbers roughly translate to one rural library for every 11,500 people, and one urban library for over 80,000 people. However, there is no precise information on the functionality and level of service capabilities of these libraries--the rural libraries could be a room with a few books, while others could be running through the support of private donors or NGOs.

After the launch of the National Mission on Libraries in 2014, which intended to develop a conducive ecosystem by setting up model libraries, building capacity and undertaking detailed surveys, the culture ministry undertook another official census of libraries to study the practices and performance of the public library system. This was known as the ‘Qualitative and Quantitative Survey of Libraries’, and began with the preparation of baseline data of 5,000 libraries. However, there have been no updates on the findings since 2014, and the outcome of the survey is unclear. The numbers too appear contradictory, as presently the total number of registered libraries in India is 5,478 according to the records of the National Mission of Libraries, but the numbers are much higher in other surveys.

The functioning of public libraries

In India, there is no uniform, country-wide system of administration for public libraries.

Public libraries are run by state governments using taxes from local administrative bodies, such as city corporations or village councils. Of India’s 29 states and seven union territories, 19 states have passed state library legislation, of which only five have the provision of a library cess or tax levy.

Percentage of library cess from states

States with lower literacy rates did not have library legislation until recent years—Bihar and Chhattisgarh passed legislation in 2008 and Arunachal Pradesh in 2009, yet both are still without a library cess.

Local library authorities are supposed to record and publish the expenditure and provision of library services available to the public, but we found that most do not.

Some districts, such as Vellore in Tamil Nadu, have been publishing statistics about public libraries annually in their District Statistical Handbook, which is also available on these districts’ websites. If such information were available for all the districts, it would go a long way in informing the public about this important service.

Financial autonomy is imperative for the proper functioning of public libraries. Except for the five states that collect library tax—Tamil Nadu, united Andhra Pradesh, Karnataka, Kerala and Goa (see map)—the other 14 state laws have no teeth to secure financial security for public libraries. This makes it difficult for the libraries to expand their services. Also, the low expenditure versus high population in many states means that the number of libraries is not adequate to cover the entire population, as The Indian Express reported on May 31, 2017.Source: Vellore District Statistical Handbook, 2016-2017

Growth of literacy and public libraries

Literacy development is closely linked to public spending on arts, culture and libraries. In India, the literacy rate has consistently risen since 1951; however, the number of public libraries, their expansion and coverage have not developed alongside. 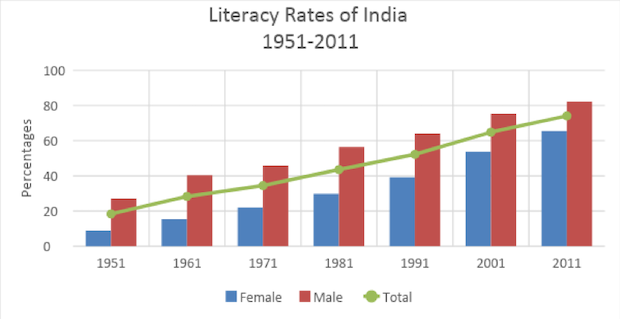 There is no relationship between a state’s capacity to spend on libraries and its willingness to do so, studies have revealed. There may also not be a straightforward relationship between a state’s capacity to spend on libraries and the funding it receives, and its willingness to spend on libraries, as the latter depends on a state’s education and literacy policies. For instance, the southern states, especially Tamil Nadu and Karnataka, have always had higher levels of public library development, with around 2,000 libraries each (see data below), far higher than the numbers in Bihar, which has a larger population. But these states have not always had large central government assistance for this purpose. On the other hand, many states have also failed to even seek funding from the Centre for the development of public libraries. 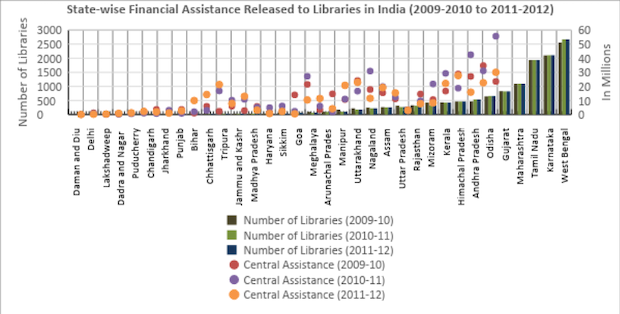 Public libraries in the US, UK and other European countries use library resources to cater to large populations. In the US, for example, the public library system provides services to 95.6% of the total population and spends $35.96 per capita annually, whereas in India the per capita expenditure on the development of public libraries translates to 7 paise. The funding for libraries in the US is primarily local—80% of the funding comes from local councils rather than national funds.

Comparison Of Per Capita Expenditure On Public Libraries 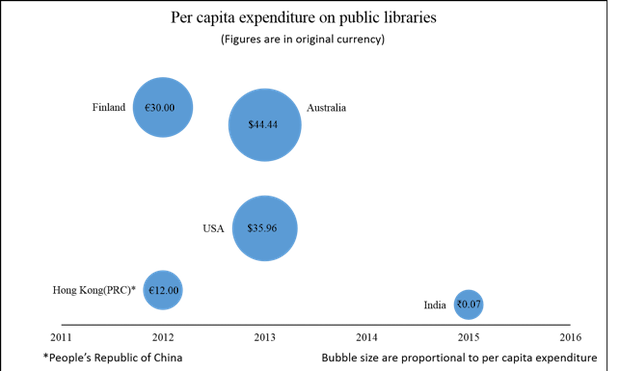 Source: Susannah et al. 2013; ALIA, 2016; ILMS, 2016; The Legislative Council Commission, 2016; Sethumadhavrao, 2016Public libraries are regarded by scholars as far more than a repository for books. They are seen as a landmark, a catalyst for urban development, a space for social interaction and a vital hub of the public domain as an experience. In today’s information age, libraries in many countries are exploring, along with traditional library services, a range of activities such as hosting of events, digital services, engagement with the public especially with neglected communities that need support, and creating a knowledge economy that can give access to education.

For libraries in India to serve broader functions, investments in public libraries should be increased, while also making concerted efforts to systematically improve the functioning and services provided by libraries.

(Balaji and Vinay are part of the IIHS Library team in Bengaluru. Mohan Raju is an External Consultant at IIHS.)