How Modi Changed (And Changed) The Demonetisation Narrative 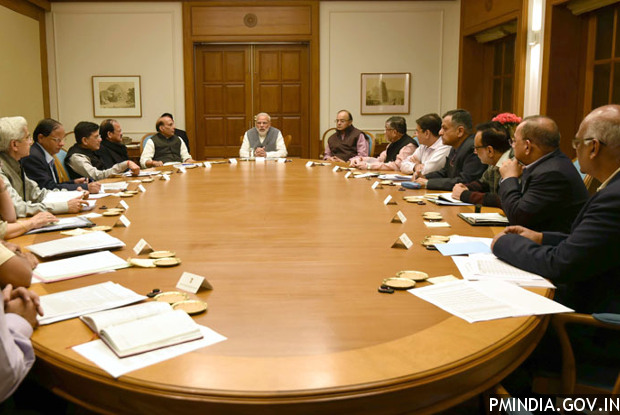 Prime Minister Narendra Modi chairs a meeting on demonetisation, on November 13, 2016. An IndiaSpend analysis of the Prime Minister's seven speeches reveals a shifting of the narrative of the demonetisation action and its objectives.

Prime Minister Narendra Modi addressed the nation on November 8, 2016 to announce the withdrawal of Rs 500 and Rs 1,000 notes.

The speech (in English) lasted 25 minutes. The Prime Minister uttered the phrase “black money” 18 times in this speech. He mentioned “fake currency” or “counterfeit” five times in the same speech.

It was unambiguously clear from the Prime Minister’s speech that the primary motivation for the sudden withdrawal of nearly 86% of the country’s currency was the evil of black money.

The next day, the papers termed it a “war on black money”. PayTM, a mobile payment app, hailed the decision with a full-page ad and the Prime Minister left for Japan.

By the time the Prime Minister returned from Japan, the move had been christened “demonetisation” in English, “notebandi” in Hindi and there was a war-time like rationing of currency in the country.

A data analysis of the speeches (after translation) reveals a shifting of the narrative of the demonetisation action and its objectives.

In his speech on November 8, 2016, when he announced the demonetisation policy, the Prime Minister used the phrase “black money” four times more than “fake/counterfeit currency”.

The chart below shows the ratio of the three narratives--“black money”, “fake currency” and “cashless/digital pay”--in each of the Prime Minister’s speeches over three weeks and seven speeches.

In other words, in the same speech, how many times did the Prime Minister use each of these phrases to describe the reasons for demonetisation which can be used as a proxy to understand what the Prime Minister believes was the primary objective for this mammoth exercise.

The saffron line representing the “cashless/digital” phrase in the Prime Minister’s speeches went from 0 in the November 8 speech to a 73% ratio in the November 27 speech.

The green line representing the phrase “fake currency” went from 22% to 0 in the same period suggesting the Prime Minister no longer believes that terror financing was the primary or secondary driver of this demonetisation exercise.

The black line representing the phrase “black money” went from a high of a 80% ratio on November 8 to only 27% on November 27. Apparently, it is no longer a “war on black money” but instead a “war on all currency” to go cashless.

So, between November 8 and November 27, the objective for the demonetisation exercise has swung from black money elimination to going cashless, as evident in the Prime Minister’s speeches.

To be sure, urging citizens to use less cash and resort to digital transactions is a laudable objective and must certainly be encouraged. But when a decision was taken to remove a whopping 86% of the country’s currency overnight with all its attendant costs, one would have hoped there was one strong rationale for it, even if it meant achieving multiple objectives.

Either the Prime Minister has realised that the original primary objective of eliminating black money may not be met or there was not adequate thought behind the decision.