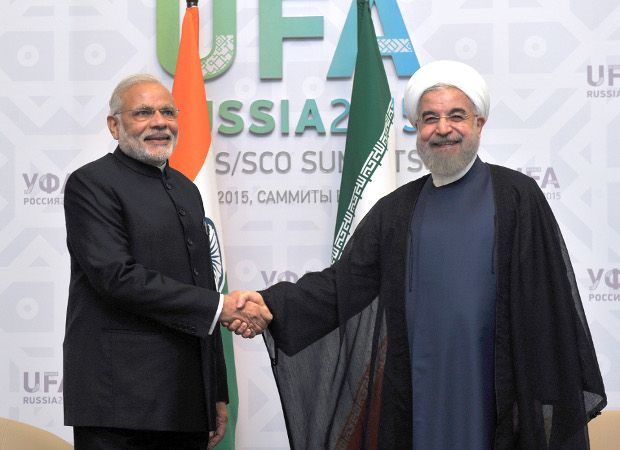 India hopes for a new business bonanza from Iran, after the international community agreed to release a nine-year-old sanctions and trade embargo.

Iran’s Foreign Minister Javad Zarif visits India on August 14, the first ministerial visit to India after Iran signed a historic and controversial nuclear deal with the West on July 14, 2015. India has welcomed the nuclear deal.

Here are some benefits predicted for India:

A chance to renew ancient ties

India and Iran shared a border until 1947, and there are ancient cultural and political ties between the two countries. Indeed, Persian was once the language of India’s ruling class.

How India weaned itself off Iranian oil

In May 2012, Hillary Clinton, then US secretary of State, made a short visit to India, which was thought as her farewell trip to New Delhi. Clinton later disclosed in her book ‘Hard Choices’ that the visit was solely to convince India to reduce its reliance on Iranian oil, which India eventually did.

India’s crude oil imports from Iran dropped to zero in March this year due to US pressure. However, it increased 65% in May 2015 over the previous year, ahead of the final talks by international negotiators over Iran’s nuclear deal in June, according to this Reuters report.

Iran’s major purchases in cereals have been basmati rice and sugar, and India has been using the rupee credit for its oil due to restrictions on dollar trades. India is Iran’s top rice supplier.

Iran is an energy-rich country, with the world’s fourth-largest proven reserves of crude oil and one of the world’s largest natural-gas reserves.

A slew of unfolding gas projects is vital to India. Gas-based power accounts for just 10% of installed electricity generation capacity. More than 23,000 MW of natural-gas-fired power plants operate at a fraction (20%) of capacity due to lack of fuel, IndiaSpend has reported.

India’s Oil and Natural Gas Corporation Videsh (OVL) had discovered the Farzad-B gas field in the Persian Gulf in 2008, which had recoverable gas reserves of an estimated 12.8 trillion cubic feet.

International pressure forced India to quit, after it invested $90 million in exploration, according to this report.

Iran has now reopened the bid, and Indian companies are set to face competition from western firms, once sanctions are lifted.

An Iran-Pakistan-India (IPI) gas pipeline project has been under discussion since 2005, but there has been no progress.

Another ambitious project for India is the $4 billion Middle-East-to-India-Deepwater Pipeline (also called the South Asia Gas Enterprise project), expected to supply 31 million cubic meters of gas per day to India once implemented.

The 1,300-km-long pipeline will start from Chahbahar in Iran and Ras Al-Jifan in Oman. After traversing the deep bed of the Arabian Sea and bypassing Pakistan, it will reach Porbandar in Gujarat. The project could also bring Turkmenistan gas to India through a swap arrangement with Iran from a gas field in the Arabian Sea. 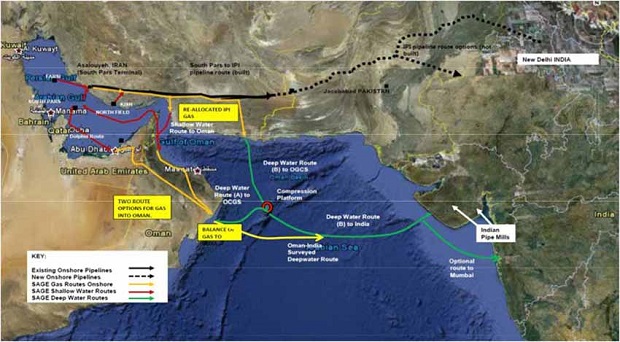 Map used with permission from SAGE

Iranian President Hassan Rouhani has offered India an opportunity to invest in infrastructure and connectivity projects worth $8 billion. Rouhani met Modi in July on the sidelines of a BRICS summit in Russia, and the Iranian President suggested a larger role for India.

India signed an agreement with Iran in May 2015 to develop the Chahbahar port on Iran's south-eastern coast, which will give India sea-land access to Central Asia and Afghanistan, bypassing Pakistan.

India will invest $85 million to outfit two berths, one as a container terminal, the second as a multi-purpose cargo terminal.

The project can reduce cargo-transport time to Russia, from the current 45-60 days to 25-30 days. A successful dry-run was conducted last year. ¦