How India’s Scheduled Castes & Tribes Are Empowering Themselves 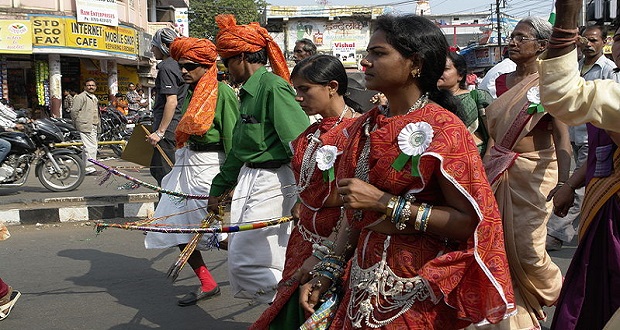 * Urban areas have seen the highest increase in SC/ST population, and a major factor is migration.

* Higher female literacy has led to narrowing of the gender gap in literacy to 18.7% for SCs and 19.1% for STs, which is comparable to the national average of 16.3%.

Rahul Gandhi, Vice President of the Indian National Congress, caused a stir a few days ago when he said that the “Dalit (or Scheduled Castes/Scheduled Tribes) community needs the escape velocity of Jupiter" to achieve success while addressing a national awareness camp for Scheduled Castes Empowerment at Vigyan Bhavan in New Delhi in October 2013.

Success can and should be defined in many ways. One is the ability to move away from a poorer rural background to an urban setting with a livelihood and a higher standard of living. This, it would appear, is already happening and gathering pace.

Data just released by Census 2011 broadly reveals that members of the SC/ST communities in the country are moving towards cities and are gaining better education. On the flip side, there are concerns on the sex ratio and spread of education for women.

The move towards the cities should not be a surprise. Dalit movement founder Dr. B R Ambedkar urged his followers to pursue education as a means of escaping from poverty. He also encouraged them to move to the cities as they would experience fewer caste restrictions there.

The SC and ST list is prepared by each state and Union Territory under Article 341 and 342 of the Constitution of India. Hence, every year, new castes are added and removed from the lists. 20 new castes and 41 new tribes that have been added from 2002-2008 by states/UTs have been included in Census 2011.

The majority of SCs and STs live in rural areas though the population growth rate is the highest in urban areas with 41.3% for SCs and 49.7% for STs. Urban areas have seen the highest increase in SC and ST population, and a major factor responsible for this is migration.

Among states, Punjab has reported the highest percentage to total state’s population with 31.9% as SCs (and the state has not reported any ST population) while Mizoram reported only 0.1% of their population as SC.

One reason Punjab is witnessing an increase in SC population is possibly in response to demands to bring more communities under the classification. This could be happening elsewhere too.

In case of STs, Mizoram reported the highest percentage to total of state’s population with 94.4% (this could be explained by the fact that most of Mizoram falls in the tribal belt) while Uttar Pradesh reported the lowest population percentage with 0.6%.

Even though the child population as a proportion of population is higher than the national average, we can see a steady decline over the past decade. This indicates that people from the SC and ST category prefer fewer children.

One reason for the decline in child population is attributed to declining total fertility rate, which has come down from 3.1 to 2.5 according to the National Family Health Survey 3 (2005-06).

Bihar and Jharkhand had the highest proportion of children to the total SC population with 21% and 18%, respectively, in 2011.

One way of interpreting this could be that preference for a male child has led to the decrease in child population.

Among STs, the highest literacy rate is in Mizoram and Nagaland while the lowest was in Andhra Pradesh and Jammu & Kashmir.

Higher female literacy has led to a narrowing of the gender gap in literacy to 18.7% for SCs and 19.1% for STs, which is comparable to the national average of 16.3%.

A total of 17% of the country’s work force are SCs while 10% are STs. The worker participation rate for both SCs and STs is above the national average (39.8%) with 40% and 48%, respectively.

According to the 2009-10 poverty estimates of the Planning Commission, STs have the highest level of poverty in rural areas among all social groups with 47.4% of the population below the poverty line. This is followed by SCs with 42.3%. In urban areas, 34.1% of SCs are below the poverty line while for STs it is 30.4%.

There is a clamour for increased reservation in a host of areas, including for private sector jobs. It would be interesting to contrast these demands against the trends that we are seeing from some of this data. And infer what the policy approach in future ought to be.