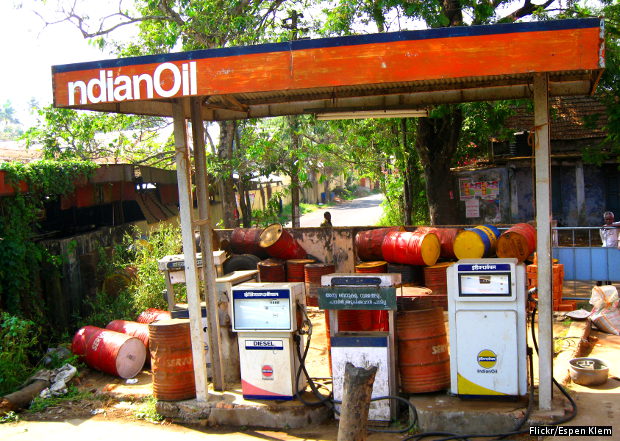 Throughout the previous decade, Bihar has consistently been the lowest per capita recipient of fuel subsidy transfers amongst all states and Union Territories, our assessment of government data reveals.

The state, one of the poorest and most populous in the Indian union, is currently in the midst of a nationally-watched state assembly election. Among the issues under debate is the granting by the central government of ‘special category status’ to Bihar, a longstanding demand of state politicians across party lines, based partly on a sense of historical discrimination against the state within central-government funding allocations.

A key issue frequently unrecognised in these discussions on the fiscal relationship between the central government and poorer states is the inequality between states in the distribution of (centrally-financed) fuel subsidies.

In the past decade, fuel subsidies have collectively represented the single-largest social transfer administered and funded by the central government.

At the national level, the highly regressive social distribution of fuel subsidies—and in particular of diesel and liquefied petroleum gas (LPG) subsidies—is well-documented. Less widely understood is the structural discrimination between states inherent in both current and previous fuel subsidy policies, with consumers and businesses in India’s poorest states receiving a disproportionately low share of total subsidy transfers.

In FY14, a Haryanvi received four times as much subsidy as a Bihari

Total per capita subsidy expenditure for the 20 largest states and Union Territories in financial year (FY) 2013-14 (the most recent year for which state-level consumption data is currently available), highlights the scale of the disparity between states in the receipt of subsidy transfers, as the data below show.

For every Re 1 in diesel subsidies received in Bihar, Haryana received Rs 10

In 2013-14, Bihar was the lowest per capita recipient of subsidy transfers for diesel, receiving less than 10% (Rs 175 per capita) of the equivalent transfer received in Haryana (Rs 1,770 per capita), the highest among major states (see chart below).

For every Re 1 in LPG subsidies received in Bihar, Delhi received Rs 8

Bihar was also the second-lowest recipient of subsidy transfers for LPG in FY 2013-14 (marginally exceeding only Jharkhand, and having previously been the lowest per capita recipient in FY 2012-13), receiving a per capita average of Rs 170 (see chart below). This represented approximately one-eighth of the equivalent transfer in Delhi, which received Rs 1,340 per person.

Despite being the poorest Indian state, and among the states with the lowest level of access to electricity and LPG, Bihar’s allocation of subsidised kerosene (the one subsidised product whose distribution is directly determined by the central government) was roughly equivalent to the all-India average at Rs 257 per capita, with several wealthier states—most prominently Gujarat, at Rs 371 per person—receiving far higher per capita subsidy allocations (see chart below).

Bihar has consistently received the lowest per capita fuel-subsidy transfer

The cumulative effect of these distortions in subsidy expenditure—a direct result of central government decisions regarding the design and implementation of fuel subsidies—is massive, resulting in huge disparities in multi-year resource transfers.

During this period, Bihar consistently received the lowest per capita transfer of all states (between Rs 525 and Rs 625 per person). The data below show the total per capita subsidy received in Bihar, relative to selected states and UTs, for FY 2011-12 to FY 2013-14.

The table below shows the total transfer required to equalise the transfer received in Bihar and that received in selected states for the three years to March 2014 (without accounting for inflation), and the per capita transfer that this would represent (using 2014-15 population estimates).

Figures 1-4 are calculated from the following sources:

Figure 5 and Tables 1-3 are calculated from the following sources: