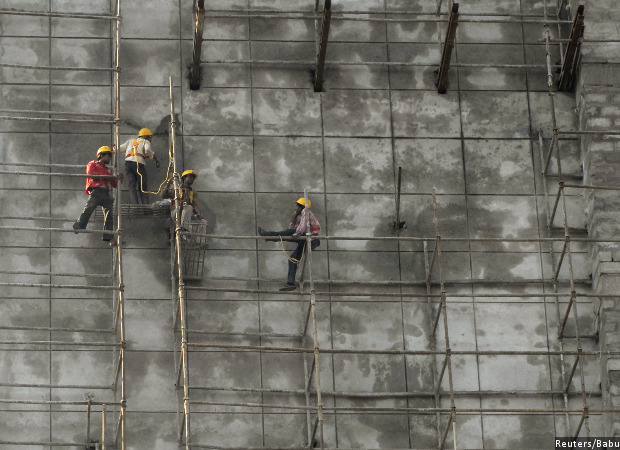 Labourers rest on the scaffolding of a building undergoing construction in the southern Indian city of Chennai. With trees, lakes and open spaces replaced by roads, expanses of concrete with closely spaced multi-storeyed buildings, Indian cities are turning into “heat islands”.

The monsoons have currently dissipated intense heat across India’s growing cities, but temperatures are rising and will continue to climb because of the way urban areas are expanding.

With trees, lakes and open spaces replaced by roads, expanses of concrete with closely spaced multi-storeyed buildings—often in violation of zoning and setback laws—Indian cities are turning into “heat islands”, according to an IndiaSpend review of scientific studies in five cities.

A clear trend is evident: The difference between the daytime maximum and nighttime minimum daily temperatures—the diurnal temperature range (DTR)—is steadily declining. This indicates that concretising cores of cities are retaining heat, even as temperatures rise in formerly cooler outskirts, as they, too, urbanise. A higher range of temperature indicates greater cooling.

Heat islands are created by a combination of design, construction material and environment. Closely built buildings form canyons that trap heat reflecting from their walls. Air-conditioning vents, especially in narrow alleys, further warm up buildings and nearby areas.

Trees, shrubs, grass and soil absorb heat and cool the land, but since these are increasingly absent in Indian urban design, and what existed is being cleared, what’s left is concrete and asphalt, which soak in and intensify the day’s heat, staying hot for many hours at night.

On an instinctive, tactile level, you can feel the effects of heat islands in cities dissipate and the temperature drop when you pass a rare, green expanse, such as Delhi’s Lodhi Gardens or Jawaharlal Nehru University and Bengaluru’s Indian Institute of Science.

Here are the details of what’s happening in five cities:

As Delhi’s metropolitan population grew 20% between 2001 and 2011, the difference between its maximum and minimum temperatures flattened out, reported this 2015 paper by Manju Mohan, a professor at the Centre for Atmospheric Sciences, Indian Institute of Technology, Delhi, and Anurag Kandya, now assistant professor at Pandit Deendayal Petroleum University, Gandhinagar. Using data from US satellites that scan the Earth’s features and climates every 24 to 48 hours, the duo studied built-up areas (with varying densities); green areas (from forests to gardens), open areas, riversides and urban outskirts that resemble rural areas. As the maps show, higher temperatures became more evident in wider areas between 2001 and 2011, as built-up area grew nearly 17%. Wider temperature variations—meaning cooler areas—were evident in urban villages and open areas. Northwest and Southwest Delhi, areas of intense growth, registered the largest fall in temperature variation—between 2.5 to 4 deg C. 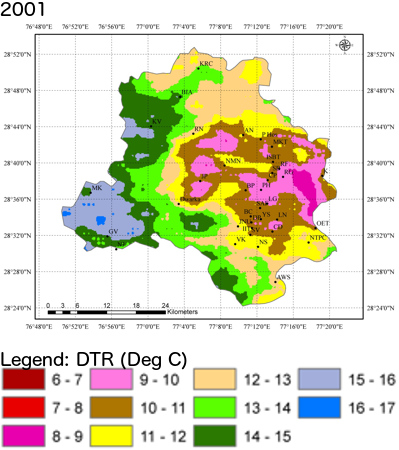 Source: Indian Institute of Technology Delhi. In Delhi, the difference between maximum and minimum temperature during the day has reduced over the years, especially in its fast-growing residential areas and commercial hubs.

During the hottest period of the year in late May—called agni natchatiram (star of fire)—the temperature in the commercial complexes and densely populated residential expanses of central and north Chennai registered the most variations; the outskirts were cooler, reported Anushiya Jeganathan and colleagues at Anna University’s Centre for Climate Change and Adaptation Research in this 2016 paper. Compared with observations in 1991 and 2008, heat islands have grown more intense, with a 1.5 to 2 deg C variation with the peripheries in 1991 growing to 2.53 deg C by 2008. Wherever there was vegetation, a cooling effect was evident. 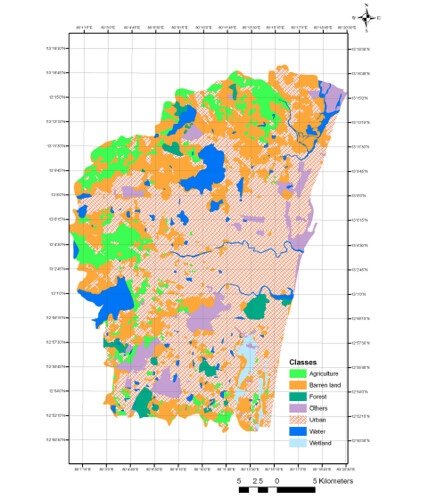 Source: Theoretical and Applied Climatology. In Chennai, the hottest areas are the urban centres and the coolest farmlands and open places.

The creation of heat islands in Guwahati indicates that India’s smaller cities, too, have areas of growing heat, as they concretise. A daytime heat-island effect left core city areas up to 2.12 deg C warmer than the outskirts and 2.29 deg C at night, according to this 2014 study by Apurba Kumar Das and Juri Borbora of Tezpur University, illustrating how heat once absorbed by roads and buildings intensifies. Das and Borbora measured temperatures at four places at half-hourly intervals.

Thanks to tall buildings funnelling and focusing heat, the heat-island effect was stronger early morning than late evening, stronger in winter than summer, reported George Thomas and colleagues of Thirvananthapuram’s Centre for Earth Science Studies in this 2014 paper. Heat islands had the greatest impact in what the researchers called “compact mid-rise zones” close to the city centre, where average building heights range from nine to 24 m. The most intense cooling was apparent in open and sparsely built areas in all seasons. Pre-monsoon rains and overcast skies weakened Kochi’s heat-island effect. 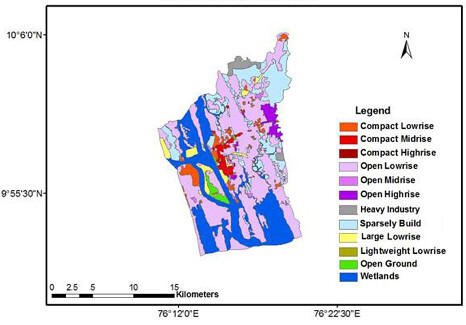 Source: Procedia Environmental Sciences. In Kochi, areas with concentration of high- and mid-rise buildings are prone to heat island effect.

Thiruvananthapuram: How the wind is blocked

Like Kochi, Kerala’s capital reported a 2.4 deg C higher temperature at the city centre, with areas of densely arranged low-rise (one- to three-storey) and high-rise (three- to eight-storey) buildings the warmest, according to this 2014 paper by Shareekul Ansar and colleagues at the Centre for Earth Science Studies. The maximum evening temperature drop of 3.4 deg C was reported in rural areas, a degree more than city areas. The city is cooled by a sea wind between 8 and 9 pm, but the wind was blocked in areas with dense buildings, keeping temperatures high. 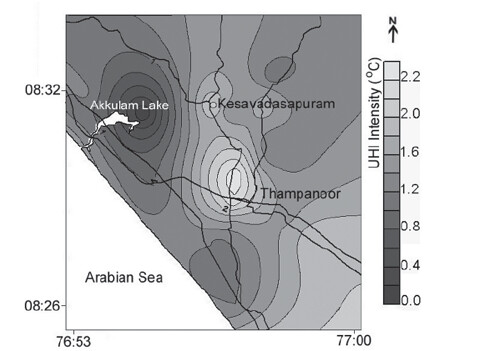 Variations of these trends were manifest in other cities, and it was evident that traditional building material cooled homes better. In Vellore, Tamil Nadu, roofs of thatch had the best cooling effect, reported Krithika Raghavan and colleagues of the Vellore Institute of Technology in 2015.