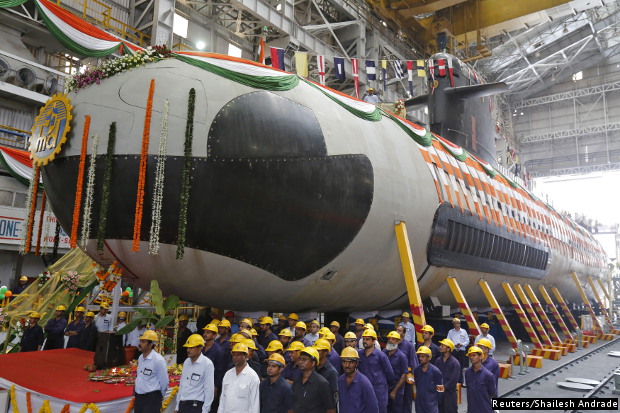 INS Kalvari, the Indian Navy's first Scorpene-class submarine, before it was undocked in Mumbai on April 6, 2015.

A recent visit by an advanced Chinese Yuan-class submarine to Karachi, Pakistan, after traversing the Arabian Sea, worried Indian authorities concerned about China's growing undersea-warfare capabilities—more than four times as large as India's.

The submarine, with 65 crew, spent a week in Pakistan, refuelling and restocking, before sailing back to China. Yuan-class submarines are diesel-electric, but unlike Indian conventional submarines, which must surface to "breathe" and charge batteries, they are capable of staying submerged for weeks.

India now plans to lease a second nuclear attack submarine from Russia and the government has just approved a Rs 90,000-crore ($14 billion) plan to build six nuclear attack submarines in Vishakapatnam. But as Admiral P Murugesan, vice chief of naval staff, told The Economic Times last week: "We have started work, but we are still at the pen-to-paper stage."

India is rushing to counter China by building conventional and nuclear submarines with German, French and Russian help. But China's lead is large, growing and it plans to export its undersea expertise.

Particularly disconcerting for India are reports that China plans to sell eight Yuan-class submarines to Pakistan, at a time when Indian submarine forces are, according to this report, in "a state of crisis" and the country jittery about Chinese submarine power.

A conventional Chinese submarine berthed at Colombo’s port twice during 2014, sparking concern in India, leading to a Sri Lankan assurance it would not do anything against Indian interests.

Chinese Navy clearly ahead of India

India has 14 submarines—including one nuclear attack submarine, INS Chakra, leased from Russia in 2012 for 10 years—against China’s 68 and Pakistan’s five.

Most of India’s conventional submarines are more than 20 years old and are reaching the end of their service life, according to this report by the Parliamentary Standing Committee on Defence (2014-15), which said it was "dismayed" at the "snail-pace" of commissioning naval vessels.

The Indian Navy has commissioned two submarines and decommissioned five submarines over the last 15 years, Defence Minister Manohar Parikkar said in a reply to the Rajya Sabha.

China launched or commissioned more than 60 naval ships and crafts in 2014. A similar number is expected through the end of 2015.

The Indian Navy has 141 vessels, including 127 surface ships and 14 submarines. The Chinese Navy has more than 300 surface combatants, submarines, amphibious ships and missile-armed patrol craft.

Under the sea too, Chinese superiority

India’s first nuclear submarine was leased in 1988 from the Russian Navy and returned in 1991. The present nuclear submarine, INS Chakra, is considered one of the deadliest non-American attack boats in the world.

The plan to build six French-designed Scorpene-class submarines is called Project 75. The first diesel-electric submarine of this class—INS Kalvari—was launched on April 6 2015 and is expected to be inducted into the Navy by 2016. The other five will be delivered to the Navy by 2020.

Under Project 75 (I), two submarines are to be built at the collaborator’s yard abroad (DCNS, France) and four within the country (three at Mazgaon Dock, Mumbai and one at Hindustan Shipyard, Vishakapatnam).

India’s first indigenously built nuclear-propelled strategic submarine, INS Arihant (Destroyer of the enemy), was launched in 2009 and is currently under trial. The SSBN gives India a nuclear triad of missiles that can be launched by air, from land and under the sea.

Another indigenous SSBN, INS Aridhaman, is also under construction, and work on a third will start soon, according to this report.

China already has three Jin-class SSBNs in service, according to this report, and may have eight in service by 2020.

India already has five such aircraft, according to this report.

In May 2015, INS Kavaratti, a fourth indigenously-built ASW corvette, was launched. It has state-of-art weapons and sensors, including a medium-range gun, torpedo tube, rocket launchers and a helicopter.

India is in the process of finalising a contract with the US' Sikorsky Aircraft Corporation for 16 S-70B ASW choppers. The deal has been pending for the last 15 years.

Update: The story has been updated with details of a scorpene submarine manufacturing project.