How India Could Be A Global Beacon Of Gender Data 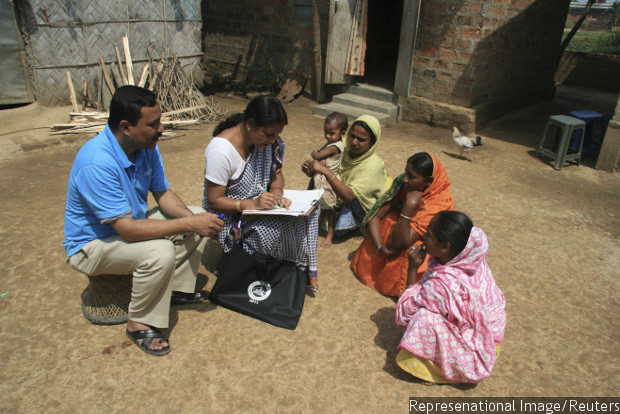 Through creating new ways of measuring gender equality, and more gender-sensitive surveys, India can become a leader in improving the science of gender data, statistics that show inequalities between men and women in all areas of life, which are important to achieve the fifth goal of the United Nations' Sustainable Development Goals (SDGs), which calls upon all nations to achieve gender equality and empower all women and girls by 2030.

With its rich body of data sources and researchers, the nation can advance the global effort to improve gender data and their use for gender equality and women's empowerment.

Why are data on gender equality important?

To make progress toward gender equality, a nation first needs to know exactly how to do better. For this, we need gender data that can measure incremental progress towards women's empowerment, supporting women's voice, choice, and control over their own lives and safety.

The nation's gender budget, established in 2005 to support women-specific programmes, has likely contributed to demonstrated improvements in gender equality in India, but has been insufficient. Better data could help target funding to those areas that need it the most, such as labour-force participation, or could be used to strengthen programmes that have insufficient impact, such as sexual violence prevention.

In contrast, national estimates of domestic violence are based on a stronger measure, and documented that, in 2006, one-third of women faced such violence from their husbands. Funding, programmes, policies, and prosecutions for domestic violence improved following the release of these data, and the most recent estimate, from 2016, shows a decline in domestic violence across the county.

India has a mixed record on improving gender equality

At a time where other nations are rolling back resources and protections on domestic violence and child marriage, India has made progress on these issues.

Recently released national data demonstrate that India is making strides toward women's empowerment. For example, child marriage reduced by 20 percentage points--from 47% to 27%--over the past decade, while the number of women reporting domestic violence reduced from 37% to 29% over the same period, according to data from the National Family Health Survey, 2015-16 (NFHS-4).

Still, this same survey documents that India continues to have a skewed sex ratio, with 919 girls for every 1,000 boys. Further, data reveal a decline in women's labour-force participation from 29% in 2006 to 25% in 2016.

Similarly, India's overall ranking in the World Economic Forum's Global Gender Gap Index of 144 nations improved from 98 in 2006 to 87 in 2016. Particularly notable is its ranking in the realm of political empowerment--9, compared to 20 in the year 2006. However, India dropped from rank 110 to 136 in women's economic participation, from 102 to 113 in educational attainment, and from 103 to 142 in health and survival.

Better and more gender-related data could contribute to gender equality

Globally, there is a lack of measures to assess women's progress in many realms: 80% of the indicators, including sexual harassment, domestic labour distribution and time-use, and local political participation, which are part of the goal of women empowerment in the SDGs, detail no way of measuring progress toward those indicators. In other words, we cannot measure 80% of our targets to improve women's empowerment, and if we cannot measure them, we cannot ensure that we are progressing towards them.

To be sure, not everything can be quantified and measured, but that which can be should be. Non-quantifiable measures of these issues are no less important, and here case studies and qualitative research may better serve the purpose of monitoring gender discrimination.

Why India could be a beacon on gender data

Understanding progress on the path toward empowerment may seem daunting, especially when there are no robust measures to assess such a great proportion of women's empowerment indicators, but we need only look to India's progress on the issues of child marriage and domestic violence for examples of where data, advocacy, dedicated resource allocation and evidence-based strategy have led to some improvement.

For instance, the work of experts demonstrated that gender-neutral allocation of money benefited men more than women and girls, which resulted in the development of a gender budget in 2005. This gender budget will be expanded by 18% in 2018, as IndiaSpend reported in February 2017.

One recent example of the use of data to improve services includes a survey of postpartum women to understand their quality of care during childbirth at a public health facilities. The survey revealed that approximately one in five women reported mistreatment by their health provider during delivery at a healthcare facility, including discrimination or even abuse.

Data were rapidly shared with officials who changed policies and practices to expand the quality of training and clinical supervision to include these issues. The programme currently monitors provider-mistreatment through measures used in the survey, across more than 80 public health facilities in Uttar Pradesh.

The survey (in which this author was involved) and subsequent training was carried out in collaboration with Uttar Pradesh's Ministry of Health and Sambodhi, a Uttar Pradesh-based research organisation, and was funded by the Bill and Melinda Gates Foundation.

India is in the fortunate position of having a strong demographic and health survey, census data, an Annual Survey of Education Report, and other large scale representative data which provide insights into the nation as a whole, as well as into each state and district. The country also has an outstanding cadre of social scientists to analyse and provide insight into the findings from these data.

These surveys offer data specifically on women's equality and empowerment issues such as child marriage, domestic violence, and women's labour-force and political participation.

Further, India boasts a large number of internationally recognised researchers from demography, economics and public health, who have used data to understand issues and experiences unique to women and girls.

As such, the scientific capacity to capture and utilise gender data to advocate for policy change and impact already also exists in India, making it more likely that better data will result in change on the ground.

Unfortunately, India's data (and global data) do little to help us understand the experiences of women and girls in terms of their control over life choices, the assets and opportunities that may facilitate or impede those choices, and the collective efforts they make to alter their circumstances or choices.

Pilot research from sub-Saharan Africa documents important approaches to create and adapt new measures that are meaningful even in settings with few resources and low levels of education. This includes vignettes, or brief stories, to assess women's autonomy and agency across different issues, including agricultural production. Countries have undertaken survey assessments on women's control over decisions related to agricultural production, and whether the woman could alter a decision, if she did not have primary control over it.

Such approaches could be implemented in India, and expanded to health, education, labour, safety and gender-based violence. Moving beyond surveys is also important, and use of big data--such as social media--as well as direct observations in the field (for instance, tracking a number of women in public spaces over time) could be useful.

Improving our gender data on these issues can better guide our monitoring of empowerment, while also showing the way forward for other countries.

To collaboratively begin the effort of improving gender data and its use for women empowerment, a multidisciplinary group of leading researchers studying different aspects of gender inequalities in India--women's labour-market participation to maternal care, girl education to adolescent mental health--met on February 28, 2017, in Delhi, in a new initiative called Evidence-based Measures of Empowerment for Research on Gender Equality (EMERGE).

EMERGE aims to build collaboration and generation of new science for the measurement of gender equality and empowerment for health and development in India. This first meeting of experts involved discussion of what we know from evidence and experience in India, and what we have yet to learn and change.

Next steps include the development of measures for issues such as sexual harassment and violence against women, safety and autonomy in reproductive and maternal health, and women's economic empowerment, for India and beyond, with the goal of tracking and holding nations accountable for their progress toward SDG 5.

If India can continue to use existing data and research on gender for greater equality, while becoming a frontrunner in improving the quality of its data and creating new measures of women empowerment, it would bode well for not only India, but for the world as a whole.

(Anita Raj is a professor of medicine and global public health the director of the Center on Gender Equity and Health at the University of California, San Diego.)