How India Can Drop (At Least) 120 Future Power Plants 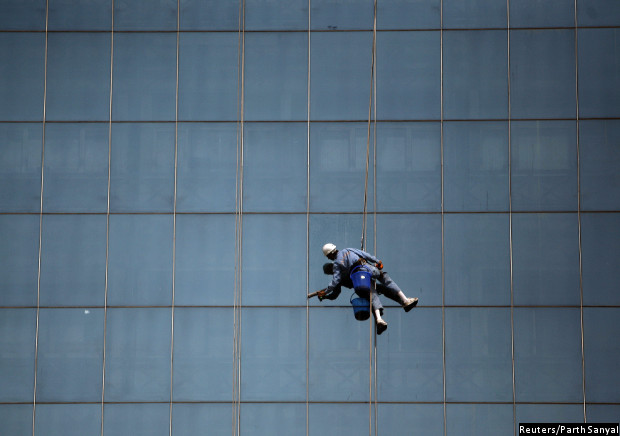 A worker cleans the glasses of a building in the commercial hub of New Delhi. If India grabs the opportunity of transforming building-energy use, it could illuminate a new path.

We have to ensure, in the spirit of climate justice, that the life of a few does not crowd out the opportunities for the many still on the initial steps of the development ladder.

As India struggles to balance responsibilities as the world's fourth-largest polluter with the aspirations of 1.25 billion people, 300 million of whom are without grid electricity, the design of its buildings offers a notable opportunity to cut energy use.

In 1971, residential and commercial buildings accounted for 15% of all the electricity consumed in India. By 2005, that share had doubled, and it has stayed at about 30% since.

In absolute terms, however, the electricity consumed by buildings is rising, and is poised to rise 700% over 2005 levels by 2050, says a study by Rajan Rawal, executive director of the Centre for Advanced Research in Building Science and Energy, CEPT University, Ahmedabad.

India has pledged to source 40% of its electricity from renewable and low-carbon fuels, and cut emission intensity 33% to 35% by 2030.

To save electricity, switch off the lights and air-conditioning

The share of households in India's electricity consumption has increased from 9% in 1971 to 22% today. A recent National Institution for Transforming India (NITI) Aayog report predicted this share would grow to 37% by 2030, if the government achieves 24x7 power supply and housing for all by 2022, as envisaged.

Houses primarily use electricity for essential lighting and to operate domestic appliances, the use of which is climbing.

Air-conditioner (AC) ownership tells a more powerful story because they consume more electricity than most appliances. The use of ACs indicates the quality of building design: its design for local climate and the comfort it offers.

In urban China, the study said, the AC use rose from nearly zero in 1992 to about 100% by 2007, driven by rising incomes and urbanisation.

Unless energy use is curbed, domestic consumption of electricity in India is projected to grow 800% between 2005 and 2050, according to Rawal’s research.

Enforcing the Energy Conservation Building Code (ECBC), an energy-saving code designed for commercial establishments, in residential buildings, could reduce residential energy consumption up to 57% and curtail rise in consumption to 300% over 2005 levels, over the same period, said Rawal.

“It would also make buildings so much more comfortable to live in,” he said.

Among other things, the ECBC code promotes the use of highly efficient building products and materials, including ACs.

Room ACs made with the best technology alone, could save India 118 TWh by 2030 or a peak demand saving of nearly 60 GW, said the aforementioned 2014 study. “This is the equivalent to avoiding 120 new coal-fired power plants of 500 MW each,” said the study.

With India on the cusp of a new construction boom, an energy-saving opportunity

India’s commercial floor space is currently estimated at 847 million sq m, and projected to increase to 1,932 million sq m by 2030.

With more than half of commercial building stock needed by 2030 yet to be constructed, the country has a huge opportunity to get its act right and construct better. In recent decades, India seems to have been doing the opposite.

Information technology (IT) multinational companies in India have given the country a taste of a western style of architecture—“glass façades that give a building a sophisticated, avant-garde look,” according to Rajat Malhotra, COO, Integrated Facilities Management (West Asia), JLL India, a real-estate services company.

With this trend quickly spreading to the banking sector, towers with glass façades are now common across India. Despite boasting "green building" tags, many of these structures are energy guzzlers, said analysts at the Centre for Science and Environment (CSE), an advocacy.

To comply with the ECBC, a building must meet minimum standards set for various design aspects and products, such as windows, walls, roof, air-conditioning, ventilation, lighting, etc.; this is called the prescriptive method. If air conditioned, it can adopt the Whole Building Performance (WBP) assessment, an energy simulation of the building's annual energy performance.

“Glass is considered a ‘green’ construction material for being made of non-polluting raw materials, through a fairly energy-efficient manufacturing process, requiring less water and generating relatively little waste and for being recyclable,” said Malhotra.

By letting in daylight, glass helps conserve energy used for lighting. So, the ECBC permits a 60% glass-to-wall ratio, irrespective of the climatic zone.

The problem is that once glass is used in the façade, the building “transforms into a different animal,” as Malhotra put it.

Glass lets through high levels of solar radiation, which traps heat, raises temperature indoors and nearby and raises AC bills.

“Air-conditioning can account for up to 84% of the electricity consumed, such as when the external façade lets in too much heat as in glass buildings,” said Anumita Roychowdhury, executive director for Research and Advocacy, CSE.

Using double glazing can reduce this energy consumption, but it will never be comparable to a façade that uses less glass, said Malhotra.

How Infosys doubled employees but used only 13% more energy

Prior to 2008, Infosys, India’s second-largest IT company, developed some of the country’s most iconic glass buildings. 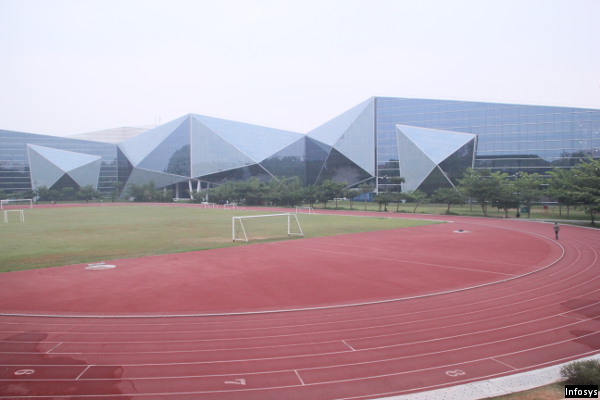 “We became aware that we could do better in building design and energy conservation, and pledged to halve employee per capita electricity consumption by 2018 compared to 2008,” said Guruprakash Sastry, regional manager, Infrastructure, Infosys.

“Some of the buildings in our campuses, initially designed as glass buildings, were uncomfortable for people to work and resulted in high energy consumption,” said Infosys’ 2014-15 annual report.

New Infosys buildings have been built with “among other things, a window-to-wall ratio not exceeding 30%, which lets in sufficient daylight, if the building is suitably designed, and harnessing more efficient air-conditioning technologies”, said Sastry, who believes the 60% ECBC limit for the window-to-wall ratio is too high for India’s tropical climate. 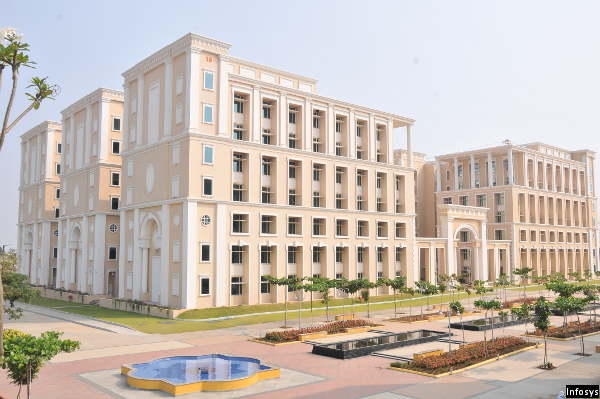 Building better has proved to be a win-win proposition.

Radiant slab cooling, a system relying on radiation from a cooled surface, Infosys’s AC system of choice, is cheaper to install by about 5% and has reduced energy consumption by 34% vis-à-vis variable-air-volume AC systems, which uses air for ventilation and as a heat- and humidity- transfer medium, the concurrent standard in new buildings.

So far, Infosys has cut per capita electricity consumption by 46% from 2008 levels. Despite doubling employee numbers from 2008, its energy needs have grown only 13%.

Electrical load for software buildings including the chiller plant

Inaugurating the Indian pavilion at COP 21, Prime Minister Narendra Modi said: “Climate change is a major global challenge. But, it is not of our making.”

True. But if India grabs the opportunity of transforming building-energy use, it could illuminate a new path.