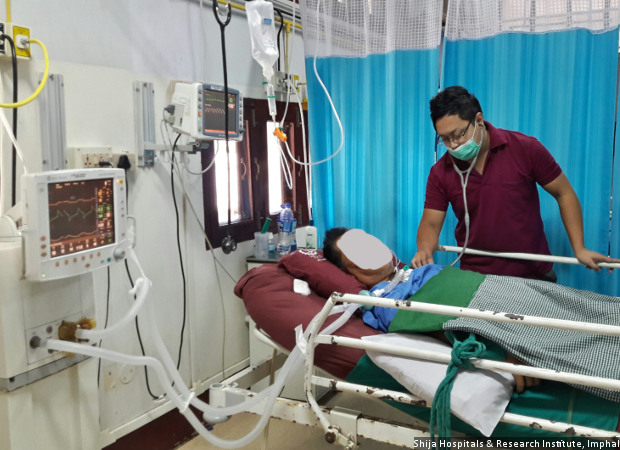 Jayanta Potshangbam, a junior resident medical officer at the Shija Hospital & Research Institute, Imphal, Manipur, looks over a 58-year-old male patient of Japanese encephalitis (JE), in critical condition. Poor management of JE in remote rural regions can cause cases to turn serious and prompt an influx of cases in urban areas. At Shija, all five cases treated in the current transmission season--during which Manipur has registered 31 confirmed cases to date, 19 adult and 12 paediatric--were brought in from outside Imphal.

Panic gripped Manipur in July, 2016, when a four-year-old girl—after suffering high fever, convulsions, and slipping in and out of consciousness over a few days—succumbed to Japanese encephalitis (JE), the state’s first death from the viral brain infection transmitted by the Culex mosquito since 2010. A few days later, the virus claimed its second victim, an adult.

These deaths were enough to close school until the end of July in the district of Churachandpur and spark a reaction in parliament a fortnight ago, as MPs asked what India had to show despite years of efforts to contain JE, caused by a virus that is a cousin of those that cause dengue and yellow fever, all impervious to medicine.

This is why JE requires more government attention than it presently gets:

India’s JE burden likely to be much higher than reported

In March 2016, IndiaSpend reported a 3% decline in allocations to the National Vector-Borne Disease Control Programme, which covers malaria, dengue, chikunguniya and JE, kala-azar and lymphatic filariasis, from Rs 482 crore in 2011-12 to Rs 463 crore in 2015-16.

JE cases could be many times the officially reported data, according to this 2016 study in the Journal of Paediatrics, because the testing method popularly used to detect the virus infection in the patient’s blood and cerebrospinal fluid may be missing cases of JE among patients of acute encephalitis syndrome, a brain fever.

“We estimated 626 symptomatic JE cases in Kushinagar, a district in Uttar Pradesh (UP), in 2012, while the state of UP reported 139 confirmed cases during the same transmission season,” said Manish Kakkar, study leader, senior public health specialist, communicable diseases and adjunct associate professor with the Public Health Foundation of India (PHFI).

The global burden of JE could be 10 times the figures reported to the WHO, this 2011 study estimated.

Adults now as susceptible to JE as children

Traditionally, children were the most affected age-group by JE, said the NVBDCP’s Dhariwal. Infection rates in children aged three to 15 were found to be 5 to 10 times higher than in adults, according to this 2012 study.

Since vaccination offers significant protection against JE, in 2006, the government launched immunisation campaigns for children aged one to 15 in UP’s endemic areas—regions where infection rates are maintained in a population without the need for external inputs. “Campaigns are the first line of action against JE, the second being routine immunisation, after covering the vulnerable population group through campaigns,” said Pradeep Haldar, Deputy Commissioner (Immunisation) at the union ministry of health and family welfare.

The NVBDCP has declared 216 districts endemic for campaigns, 17 in the current transmission season alone.

Immunisation against JE is part of routine immunisation (RI) in 197 districts. Two doses are administered, the first at about nine months, the second at 18 months.

“Good immunisation coverage has helped curtail the outbreaks of JE in south India like in Tamil Nadu, Andhra Pradesh, Karnataka, and some districts of UP, Bihar, etc,” said Dhariwal.

However, as we said, JE finds new targets. With children better protected, the virus is striking more adults. This 2015 study of 778 patients in Assam found adults more vulnerable, possibly due to exposure in paddy fields. Manipur alone recorded 19 adults and 12 children with JE in the ongoing season, according to the state’s surveillance office. This raises the question of adult vaccination.

So far, adult vaccination campaigns have been implemented in 21 “high-burden districts” identified by the NVBDCP in Assam, West Bengal and Uttar Pradesh, with another 10 districts about to be declared endemic, said Haldar, who added, "There is no shortage of funds for immunisation.”

In Manipur, public awareness about the protective benefit of vaccination is high, said Thokchom Nandakishwor Singh, State Nodal Officer (Immunisation), Manipur. So, a vaccination drive in July for those under 16 was conducted with police support to manage the crowd that turned up, with adults clamouring to be vaccinated.

Nandakishwor advocates adult immunisation in highly susceptible areas, “but this is not under my jurisdiction”, he said.

No medicine exists to treat JE. As with other viruses, patients are treated for the symptoms they develop.

Serious cases can be prevented from developing complications by the early management at the primary and secondary level—“but this pattern is often not followed in rural areas where outbreaks happen,” said Kakkar of the Kushinagar study and the PHFI.

“The apathy of government doctors to register deaths as attributable to JE, and hence frequent referrals to shift serious patients out of their care, further increase the chances of patients succumbing,” said Kakkar.

The lack of attention in remote areas spurs an influx of “serious” patients in urban hospitals sufficiently equipped to handle critical cases. This year, so far, five JE cases—four adults, three male, one female, and one 12-year-old boy—from smaller towns have sought treatment at the Shija Hospitals & Research Institute, one of Imphal’s best private hospitals. Three of those cases needed ventilator support.

“It’s been the worst year for JE in recent times,” said Chetan Khundongbam, residential medical officer at Shija, who attributes the situation to “the virus becoming more virulent”.

At the time of this interview, four of five cases had been discharged after full recovery. Khundongbam was treating a 58-year-old man, brought in from a remote region with high fever, neck rigidity, drowsiness and convulsions. He was critical and on ventilator support.

When JE was detected in India, in 1955—84 years after the first case in Japan--the disease was confined to Tamil Nadu. In 1973, it struck West Bengal. The virus then invaded 22 rice-growing states, where its carrier, the Culex mosquito, breeds in stagnant water, acquiring the infection from feeding on infected domestic pigs, the amplifying host, and migratory birds, the natural host.

Uttar Pradesh first reported JE in 1977. However, outbreaks in Gorakhpur and neighbouring districts have become more frequent and intense after the late 1970s, when more farmers switched from sugarcane cultivation to paddy, said the NVBDCP’s Dhariwal.

In Haryana, the latest region to suffer JE outbreaks, the Culex mosquito has found a new habitat--vegetation along the Yamuna.

Back in the Northeast, Assamese doctors have blamed warmer temperatures for an extended transmission season, lasting up to November instead of July, and for the rising number of cases in the state.