How Ignorance Cuts India's Healthy Life By Half 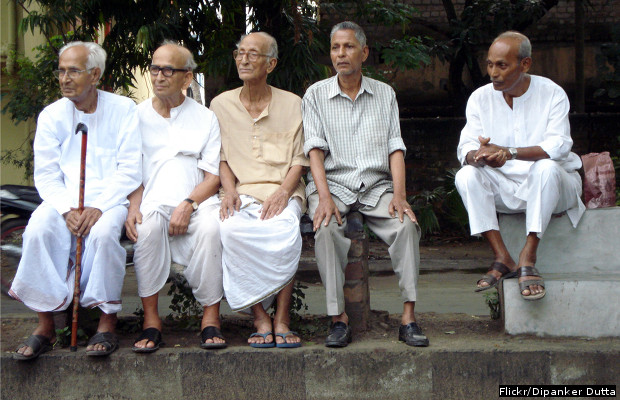 In 2013, Indian men could expect to live to 64.2 years, 6.9 years longer than in 1990, according to the Global Burden of Disease study, an initiative led by the Institute for Health Metrics and Evaluation at the University of Washington.

Increased longevity is great news. But it would be better if "healthy life expectancy"--a health measure that calculates how many years a person might live in good health--had risen as much for both men and women.

Closing this gap entails dispelling the popular notion that ageing means ill health, among other things, because the fastest-growing cause for disability-adjusted life years, lost healthy years for Indians are non-communicable diseases, chronic conditions that the general population associates with ageing, but should not be.

Despite exposure to health information, urban India is mostly ignorant

Affluent, educated and well-informed urban Indians should be healthier. They can afford healthy diets and are empowered to make the right choices, or so you would think.

Instead, experts said towns and cities across India are seeing a steady rise in the prevalence of non-communicable diseases because of a lack of awareness.

“People have heard about non-communicable diseases,” said Kenneth E Thorpe, chairman of the Partnership to Fight Chronic Diseases, a catalyst to bring together stakeholders to develop a national blueprint. “But hearing about something doesn’t constitute sufficient awareness to live healthy.”

Instead, people ignore information and do nothing when they hear too much, said David Katz, Yale University researcher and authority on nutrition, weight management and the prevention of chronic disease. Contradictory messages—one day, you hear, coffee is good for you, the next day it’s bad—especially cause people to switch off.

Preventative health messages should be simple and consistent, such as: Eat five servings of fruits and vegetables daily. Exercise 30 minutes a day, five days a week. Cut down on sugar and salt. Avoid processed foods. Quit smoking. Limit yourself to a drink a day.

To become serious about health, people must be clear about the burden of non-communicable diseases, the importance of early diagnosis and preventive steps, explained Thorpe.

Only then will people undergo regular health checks, vital because chronic diseases stay asymptomatic for many years or present very minor symptoms that are neglected or taken for signs of ageing.

India is far from this level of awareness.

Overall awareness among the study population

Awareness that diabetes can be prevented (general population)

Awareness that diabetes can be prevented (diabetic population)

Awareness that diabetes can affect other organs (general population)

Awareness that diabetes can affect other organs (diabetic population)

Participants found to have hypertension

Participants aware of their own hypertension

Awareness of own hypertension

Awarenes of older age being a greater risk factor

Awareness of family history of heart disease being a risk factor

Awareness of diabetes as co-morbidity factor

Awareness that male diabetic patients are at higher risk

Number of people with questionable symptoms

Aware of the correct cause of oral cancer

Belief that oral cancer is contagious

Awareness that smoking can cause oral cancer

Awareness that alcohol can cause oral cancer

Awareness than chewing pan can cause oral cancer

The biggest misconception of all: Ageing = Poor health

of the iceberg. India will only get the better of non communicable diseases when people stop thinking of chronic disease as a natural ageing process.

As far back as two decades ago, William Costelli head of the Framingham Heart Study, a long-term study of the prevalence of heart disease in the town of Framingham, USA, said: “Poor health is not something caused by age. It’s caused by long exposures to things that cause these disease processes.”

Mistakenly accepting heart conditions, diabetes, hypertension and other non- communicable diseases as a part of life has significantly increased their burden in India, from accounting for 31% of lost years in 1990 to 52% of lost years in 2013.

“Age is an important predisposing factor for some chronic diseases. But not everyone develops diabetes or cancer. While you cannot stop ageing, living a healthy life style is in your hands,” Damodar Bachani, director professor at Lady Hardinge Medical College, and deputy commissioner (Non Communicable Diseases), Ministry of Health & Family Welfare, Government of India, told IndiaSpend.

Some people who’ve already developed one of these conditions assume it’s a life-long condition.

Non communicable diseases cannot be treated casually because of genetic inheritance, there’s no need to ‘learn to live with it’, he said.

Accepting to live with non-communicable diseases, instead of changing one’s lifestyle to eliminate or mitigate the condition, increases the odds of dying prematurely of it.

An Indians chances of dying prematurely (before turning 70) of a non-communicable disease is already one in four, according to the World Health Organisation.

That includes Indians across the country.

Rural India suffers for not knowing and not affording

If affluent, educated India is battling an information overload, the country’s poor face a mounting burden of non-communicable diseases, driven by ignorance.

This understanding, in turn, led to the belief that rural and poor populations do not suffer from non-communicable diseases, as they lead different lifestyles, explained Nobhojit Roy, professor, Bhabha Atomic Research Centre (BARC) Hospital, Mumbai, and a co-author of the Global Burden of Disease study.

Drawing on other studies of rural and poor populations, Global Burden of Disease proves something healthcare providers in low- and middle-income countries have long known: Non-communicable diseases are becoming more prevalent, irrespective of socio-demographic status, a composite measure of per capita income, education, population age and fertility rates.

“Factors including income and education have an important impact on health but don’t tell the full story,” said Christopher Murray, Institute for Health Metrics and Evaluation director and the global study leader.

In India, for instance, a new study has found stroke to be the leading cause of death in rural Gadchiroli, responsible for one in seven deaths in that region.

“This is significant because stroke is considered the first non communicable disease to strike when disease transition begins, and hypertension, tobacco and alcohol use, and diabetes are the risk factors,” Yogeshwar Kalkonde of the Rural Stroke Research and Action Laboratory, Society for Education, Action and Research in Community Health, Gadchiroli told IndiaSpend.

If rural Gadchiroli, one of the country’s most backward regions, is seeing the first step of disease transition, other districts can at least be expected to be at par in the process, if not ahead.

In poor populations, non communicable diseases are linked to malnutrition, household air pollution, and unsafe transportation, rather than only as a result of behavioural risk factors, said Roy. Whatever the cause, it isn’t known to poor people.

When grassroots health providers are unaware, how can communities-at-large be expected to know?

It remains to be seen if training primary health workers in rudimentary screening techniques for three common cancers: oral, cervix and breast, and equipping them to screen people over 30 and pregnant women for diabetes and hypertension will help increase rural Indians’ lease of life. Such training is underway in about half the country so far. But a healthcare delivery system for non-communicable diseases is still missing in rural India.

“In rural India even if we detect hypertension early in a poor person, most will not believe there’s something wrong with them when they feel practically fine," said Kalkonde. "Only by increasing awareness about hypertension and making medicines for it affordable and accessible will its disease burden lessen."