How Grand Alliance Turned Vote Share To Seats In Bihar 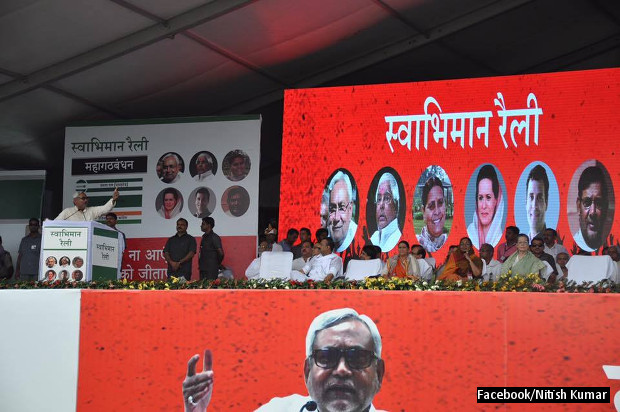 All the constituents of the victorious Mahagathbandhan (Grand Alliance) – the Rashtriya Janata Dal (RJD), the Janata Dal (United) and the Congress - managed to register a share-to-seat multiplier of more than 4 in the recently concluded assembly elections in Bihar.

The share-to-seat multiplier of the Bharatiya Janata Party (BJP) dropped to 2 for the first time in 15 years in the Bihar assembly.

The share-seat multiplier is calculated by dividing the seats by the percentage of votes a party gets. The multiplier indicates the ability of the party to convert a ‘percent of vote’ into ‘won seat’, which is the ability to convert votes - the basic unit of political equality and popular democracy - into seats.

While the share-to-seat multiplier for the RJD and the Congress moved up from around 1 to above 4, the JD(U) and the BJP saw their multipliers decline in the 2015 elections.

BJP, despite being the single largest party according to vote share, won only 53 seats, registering a share-to-seat multiplier of 2.2.

The JD(U) saw its multiplier decline from 5.1 to 4.2, mostly due to the fewer number of seats it contested.

The RJD was the biggest beneficiary of the strategic planning of the Mahagathbandhan.

The RJD contested an equal number of seats – 101 – along with the JD(U). The RJD became the single largest party by winning 80 seats while the JD(U) won 71.

Magnitude and margin of victory

Only two candidates will enter the Bihar assembly with more than one lakh votes – the RJD’s Arun Kumar from Saharsa and the Congress’s Abdul Jalil Mastan from Purnea.

Six candidates have won with a victory margin of more than 50,000 votes. Out of them, five belong to the JD(U) and one to the Congress.