How Govts Across India Are Violating Forest Rights

Mumbai: As many as 26 cases across 11 states show that forest land is being acquired by the government for development projects like mining and dams by forging consent of tribespeople or by ignoring it, according to a new analysis.

Public hearings were either not held or were conducted at far-off locations where affected tribespeople could not participate, according to Land Conflict Watch, an independent data-journalism initiative that maps and analyses on-going land conflicts, which has documented 118 cases of violation and non-implementation of Forest Rights Act (FRA).

There were delays in approving the claims filed by the communities on the land where projects are proposed, the analysis shows.

In at least one case, the government authorities took away the land titles they had given to the communities.

Several independent studies and government’s own data reveal that the implementation of FRA has been poor even after a decade of its enactment.

About 1.8 million land titles have been given over 5.7 million hectares of forest land till October 2017, according to ministry of tribal affairs data. This is just about 14% of the forest land on which forest dwellers could potentially claim rights.

A 2016 study by Community Forest Rights-Learning and Advocacy group (CFR-LA), a national network of organisations and individuals working on forest rights, estimated that forest dwellers should have rights over at least 40 million hectares forestland across the country.

It took a 160-kilometre march from Nashik to Mumbai by over 40,000 farmers and forest dwellers to get Maharashtra government commit to recognise their rights over forest land that many of them have been tilling for generations.

Maharashtra chief minister Devendra Fadnavis announced on March 12, 2018, that all the pending applications to claim land rights under the FRA in the state will be settled within the next six months.

FRA, which was passed in 2006, recognises the rights of tribespeople and other traditional forest dwellers to access, manage, protect and govern the forestland and natural resources that they have been using for generations. According to the FRA, forest dwellers can file claims to get legal titles over such lands.

While the Maharashtra government seems to have heard the demands of forest dwellers, millions in other states are still fighting to get their forest land rights, causing conflicts because state governments are either violating or not implementing the FRA provisions.

The 118 such conflicts recorded by Land Conflict Watch span over 480,000 hectares of land and affect over 1.3 million people.

In most of these cases, the forest dwellers complain that the government is delaying the recognition of their land rights, rejecting their legitimate claims, forcing plantations on their land, evicting them from protected areas, and forging or ignoring the consent of gram sabha (village council) to carry out industrial activities in their region.

Of the total forest rights land titles issued so far, only 3.5% are community rights. The rest are individual forest rights. While individual rights legally enable landholders to own, cultivate and invest resources on their land, community forest titles enable all the villagers, including landless people, to access, use and sell minor forest produce and use other forest resources within their traditional boundary.

The tribal ministry data show something even worse.

The government authorities have rejected more than 43% claims filed by the forest dwellers across India. As many as 79% claims were rejected in Uttar Pradesh--highest among all states--followed by 67% claims in West Bengal, 63% in Maharashtra and 59% in Madhya Pradesh.

Most states do not explain why claims are rejected. Those that do, often cite as the most common reason the lack of documents to prove the claimant has been cultivating the land in question, IndiaSpend reported on March 16, 2018.

The central government and some states have been systematically trying to dilute the provisions of FRA. In the past two years, the environment ministry has issued guidelines that take away the rights of forest dwellers to access their traditional forest land and to decide its use.

"The implementation of FRA has been quite abysmal,” said Shankar Gopalakrishnan of Campaign for Survival and Dignity, a forum of organisations working on tribal rights, “This is not due to negligence of the government but due to deliberate sabotage by the forest bureaucracy, both at the Centre and the states, and to some extent by big corporates.”

The forest bureaucracy fears that it will lose the enormous power over land and people that it currently enjoys, while the corporates fear they may lose the cheap access to valuable natural resources that they currently have, said Gopalakrishnan.

The tribal ministry did not respond to queries emailed by IndiaSpend.

Forest dwellers have been denied rights to the forestland they use since colonial times. For British rulers, forest was a source of revenue, which drove their timber trade. So, anyone who inhabited or used forest was termed an encroacher.

Independent India perpetuated this, but the Forest Rights Act was passed in 2006 to correct this “historical injustice”. 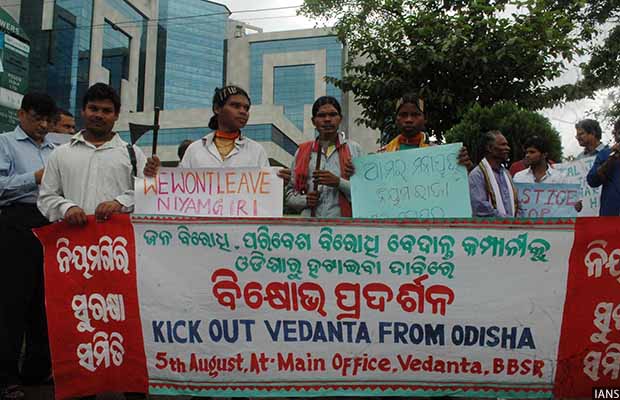 The law makes gram sabha a statutory body to protect and decide the use of forestland. This right was upheld by the Supreme Court in its landmark judgement on Vedanta’s mining project in Odisha’s Niyamgiri hills in 2013. The apex court asked the gram sabhas in the region to decide whether or not to allow the mining.The gram sabhas unanimously rejected the mining project.

That, however, has not deterred government authorities from repeatedly violating FRA across India.

There are at least 33 cases from Chhattisgarh, Jharkhand, Odisha and Telangana in which forest departments have been forcing plantations on the land claimed by the forest dwellers, IndiaSpend reported on November 24, 2017.

The FRA prohibits any activity, even by the government, on the land claimed by the forest dwellers without prior consent from the village council concerned. In most of the cases, no consent was taken before plantation.

Field reports suggest that the forest department is using the compensatory afforestation fund of about Rs 50,000 crore to plant single-species, commercial plantations like teak, poplar and eucalyptus on the land of forest dwellers.

The central government has recently drafted rules to operationalise this fund. The rules, however, dilute the consent provision of FRA. They replaced it with ‘consultation’, which is a step down because consent gives veto-power to communities. Even the provision of consulting communities is limited to few cases.

Similarly, conflicts are happening in tiger reserves because the forest department has been forcibly evicting tribal communities from the forest in the name of relocation to create inviolate spaces for wildlife.

As many as 27 such cases have been reported by Land Conflict Watch from 13 states so far.

The rights of forest dwelling communities need to be settled before relocating them, according to FRA.

In some of the 27 cases, including Achanakmar tiger reserve in Chhattisgarh, communities have been barred from accessing firewood and minor forest produce such as mahua flowers on which they depend for livelihood.

In March 2017, the National Tiger Conservation Authority passed an order that effectively stopped the process of settlement of forest rights act in tiger reserves.

The authority said forest rights should not be settled in tiger zones unless the government comes up with guidelines for identifying critical wildlife habitats, which are legally defined as areas required to be kept “inviolate for the purposes of wildlife conservation”. The government has failed to draft these guidelines for the past 11 years.

"Because of the powerful interests in forests, most political parties, when in power, have preferred to either ignore or limit the implementation of FRA,” said Gopalakrishnan. “But the farmers' long march in Maharashtra has shown that this is not a viable political option in the long-term. Systematic violations of the rights of millions of people will result in mass anger. Other states should take note of this."

(Majumder is an independent environment researcher who reports for Land Conflict Watch.)