How Government Action Can Drive Or Divert Online Attention

Mumbai: “Article 370” superseded the popularity of online-search words such as “jobs” and “taxes” in India after August 5, 2019, the day the government announced the abrogation of special status for Jammu and Kashmir. 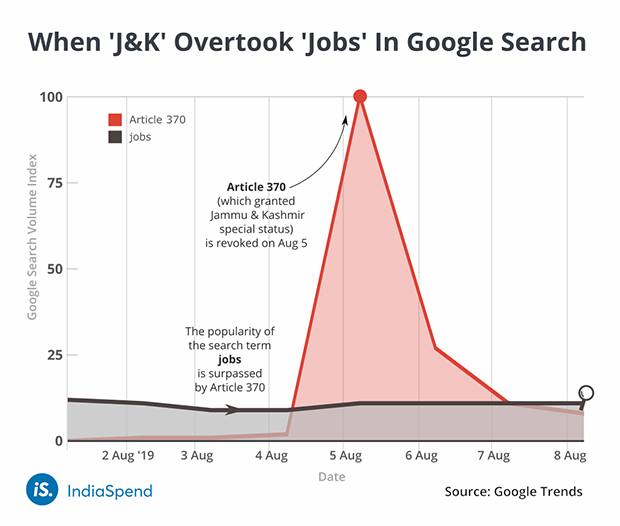 The most-searched term the day before that was “India vs West Indies” and a week before “Bear Gryllis”, according to an IndiaSpend analysis of Google trends data.

These replaced the usually most-searched terms by Indians such as ”exam results”, “news” and “Whatsapp status”.

The analysis confirms academic studies (here, here and here) that indicate how the media set the agenda for online searches. Since these are often determined by government actions, this implies that government moves can drive or divert national attention online.

On August 5, five of the top 10 or half of the most searched terms were related to Kashmir, according to the data, which means the abrogation of special status for Kashmir diverted attention from other issues. The passage of 10 other bills by the Lok Sabha, parliament’s lower house, over the week following August 5 received no attention in the search trends.

If a topic receives more media attention, there are likely to be more searches related to it, predicted a 2010 paper by University of Minnesota researchers Brian Weeks and Brian Southwell.

Some events may not be driven by government action but by others’, but result in diversion of online attention. For instance, in February 2019, after more than 40 paramilitary troopers died in a car-bomb attack on a Kashmir highway, the word “Pulwama” replaced “Rafale”, which referred to a controversial Indian government arms deal. 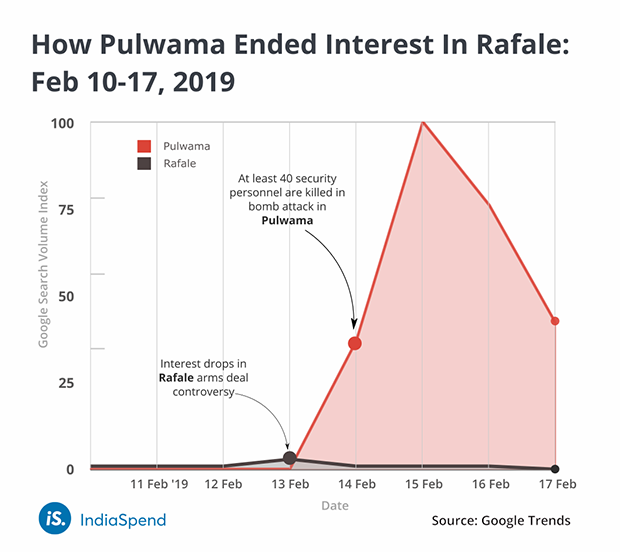 The rupee also fell to its lowest value (Rs 71.2218) against the dollar this year in February 2019, a 3.6% fall compared to its value in July 2018, but this development was overshadowed by the interest in Pulwama.

Our analysis also indicates that search interest can change almost immediately after a news break and flip back again when interest dies down.

“India vs West Indies”, a reference to the cricket match between India and the West Indies, was the most searched term between August 1 and August 4, 2019, after which it was replaced by “Article 370” on August 5. 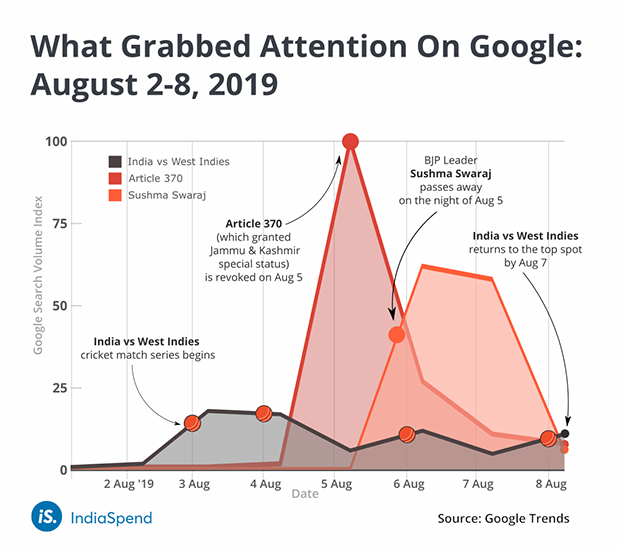 The trend was reversed a day later, when senior Bharatiya Janata Party (BJP) leader and former minister for external affairs Sushma Swaraj died on the night of August 5. “India vs West Indies” was back at the top spot by August 7, with more than a million searches.

In the first week of August 2019, as India’s jobs crisis grew and the economy slowed down, Indians online searched for exam results, cricket and entertainment, our analysis showed.

This is because many results were declared for exams in universities in north India, entrance tests to Andhra Pradesh’s engineering and medical colleges, the Railway Recruitment Board and the Jaipur Vidyut Vitran Nigam Limited, a state electricity company.

The Reserve Bank of India (RBI) reduced the repo rate, the rate at which the Central Bank lends to commercial banks, by 35 basis points on August 7, its fourth successive rate cut, and lowered its GDP growth prediction, according to this RBI press release. The rupee depreciated, inflation fell, but except for “repo rate”, no search string related to the economy featured in the trends list, which continued to be dominated by results of sporting events and entertainment.

Kuldeep Sengar, a suspended BJP state legislator facing rape charges, did not make it to the trends list that week, nor did Unnao, the Uttar Pradesh city that is home to him and the victim.

The more attention the media provide to a topic, the more the audience is likely to consider it important, researchers Maxwell McCombs and Donald Shaw wrote in a 1972 paper on the media’s agenda-setting role.

When news consumers need to know more about a topic, they try to get more information on it, from Google search and other sources, according to Weeks and Southwell.

(Iqbal, an MA in economics from the Madras School of Economics, is an IndiaSpend intern.)

Nushaiba Iqbal works as a reporter and analyst at IndiaSpend.