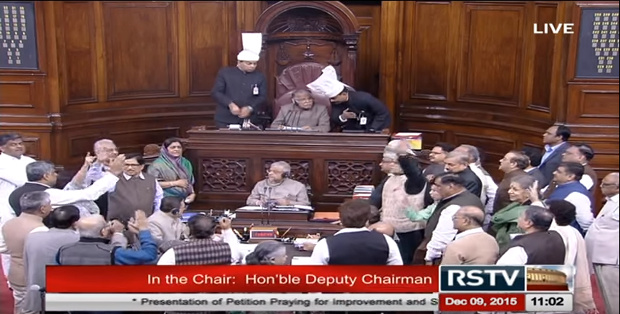 While the winter session of Parliament started with controversial debates on intolerance, the Rajya Sabha (the upper house of Parliament) had to be adjourned for the fourth time before lunch due to disruptions caused by the National Herald case.

Our analysis of data show that the Rajya Sabha is struggling to work because of disruptions. During the previous session, the Rajya Sabha worked no more than nine hours over a three-and-half week period, from July 21 to August 13, 2015.

“Governance in India, like Italy and others earlier, is caught in a logjam of far too many checks and not enough balance,” Bijayant ‘Jay’ Panda, Lok Sabha MP from Odisha, wrote recently in a blog in The Times of India.

The debate on intolerance was not among the listed business for the session.

“Parliament will meet for the winter session between November 26 and December 23, 2015. The legislative agenda includes 19 bills currently pending in Parliament for consideration and passage. 14 new bills are proposed to be introduced. Out of these, one will also be taken up for consideration and passing. Two bills will be withdrawn.” These are the some of the details of the agenda of the winter session, according to a report by PRS Legislative Research, a think tank on parliamentary affairs.

As many as 312 bills have been pending in the Lok Sabha between 2014 and 2015 and 71 in the Rajya Sabha, according to Lok Sabha (the lower house of Parliament) data.

Over the past five sessions, since the new Lok Sabha was created after the 2014 general elections, 61 bills were passed in the Lok Sabha and only three in the Rajya Sabha.

While the Lok Sabha has more legislative powers, bills lapse when it is dissolved. The same happens in the Rajya Sabha, if bills are pending there.

Regular disruptions in the house are a loss to the exchequer. During the monsoon session earlier this year, the estimated loss was Rs 29,000 per minute, according to an NDTV study.

“What happens when consensus cannot be reached and parties are not willing to soften their stand? Would Parliament not function at all? If the last few years provide any indication, there’s an urgent need to insulate the Parliament’s functioning from the vagaries of the political climate,” Chakshu Roy, head of outreach at PRS Legislative, wrote in the Indian Express recently.

(Tewari is an analyst with IndiaSpend. Sharma is an intern at IndiaSpend.)