How Delayed Pregnancies Beat Sterilisation As A Family Planning Tool 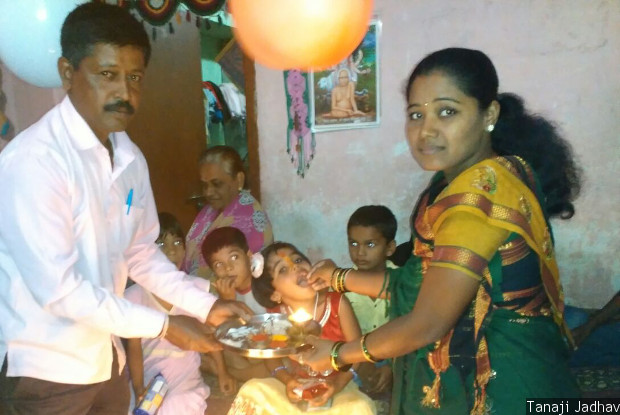 In 2007, Tanaji Jadhav (left) signed up for the Second Honeymoon Package, a conditional cash transfer scheme piloted in his home district Satara, Maharashtra, which required that wife Madhuri (right) and he wait two to three years before having their first child. Waiting several years for their first child led the Jadhavs to wait five years before having a second baby, a sign that early familiarisation with non-terminal contraception methods encourages better family planning.

Although India spends 85% of its family planning budget on sterilisation and 1.5% on distributing condoms and other non-terminal contraceptives, one Maharashtra district's brief experience with a conditional cash transfer programme shows that rewarding couples for delaying having children could work better to temper India's population growth. And it could bring numerous health, social and economic benefits besides.

In 2007, Satara district introduced a ‘Second Honeymoon Package’ (SHP) that offered newlyweds a Rs 5,000 cash incentive for postponing the birth of their first child by two years and Rs 7,500 for delaying by three years. With India’s annual per capita income in 2006-07 standing at Rs 22,553, the monetary inducement was lucrative. Vijay Singh H. Mohite, the then district health officer, conducted a survey that found 85% of the district's women had married by age 17, had a baby by 18 and another by 20, and underwent a tubectomy by age 23 to limit their family size.

Familiarity with these methods enabled some couples to wait before their second pregnancy too, according to Shobha Rao, director, Research & Training, Society for Initiatives in Nutrition and Development, Pune, and co-author of a new Asian Population Studies paper, Can Conditional Cash Transfers Promote Delayed Childbearing? Evidence from the “Second Honeymoon Package” in Rural Maharashtra, India.

Tanaji Jadhav, then aged 30 and owner of a small garage in Besavadi village in Satara, was among the 5,000 men who signed up for SHP. His wife Madhuri had been 24 when they had married in 2006. “I decided to wait three years before having our first child to save some money for the baby,” Jadhav said. “Besides, Madhuri was still young and we had no elders to help care for a baby.” The Jadhavs welcomed a baby boy just a couple of months ago, five years after their first child.

Practised on a larger scale, delayed childbearing could significantly curtail population growth “in a cost-effective, painless way that simultaneously gives young couples a window of time to establish themselves, physically, emotionally and economically, before starting a family”, Carol Vlassoff, a professor at the University of Ottawa, Canada, and lead author of the Asian Population Studies paper, told IndiaSpend.

Postponing the first pregnancy by two to three years has been shown to lower the total fertility rate by 20-30%, Swapnil Lale, assistant director, Health Services, Government of Maharashtra, and a co-author of the study, said.

India now has about 1.3 billion people and is expected to become the world’s most populous country by 2022.

Population control is intrinsic to improving the socio-economic status of Indians, over a fifth of who still live in poverty, according to the World Bank, making the country home to the world’s largest poor population by far.

In 2015, India ranked 130 in the United Nations’ Human Development Index--a review of the quality of life in 188 nations--based on measures that are likely to improve with fewer people being born annually.

When Avinash Shinde of Ranand village decided to enrol in the SHP at the age of 27, his wife's health was his foremost concern--Hema, then aged 24, had below-average body weight.

“Improving the health of brides before childbearing was a very important aim and benefit of the Second Honeymoon Package as most rural girls married young have poor nutritional status and are anaemic,” Rao said.

Preventing pregnancy at a young age, especially among women in poor health, is crucial for attaining a key millennium development goal--lowering the Infant Mortality Rate to 30, a target India set for 2012 but failed to meet, as IndiaSpend reported in January 2017.

In India, mothers aged below 20 years face 1.5 times the risk of losing their baby as compared with women aged 20 to 29.

Although only 2.1% of SHP participants admitted to having married women aged below 18 years, the minimum legal age for marriage, Lale suspected many had in fact married women aged about 16 or 17, who were in the first year of college. Delaying childbearing gave them a chance to complete their education, he said.

A third of the participating women reported educational benefits. These were more likely to be older women, educated beyond grade XII and from families with monthly incomes above Rs 15,000.

Fewer women, like Shinde’s wife Hema who was a teacher, experienced occupational benefits. Hema got to resume work soon after marriage. When their baby girl came along three years later, she was well adjusted in the household and her mother-in-law helped care for the infant.

A qualitative outcome associated with the SHP was “giving the bride time to adjust in her new family”, said Rao. A fifth of the interviewed women participants perceived better husband-wife communication as a key benefit.

“By not becoming parents too soon, we got time to understand each other and emotionally bond as a couple,” Shinde said.

India’s family planning programme would do well to extend and scale up an SHP-like programme across the country.

For one, involving men in family planning, a standout feature of the SHP, is imperative. A May 2016 Plos One study in rural Maharashtra showed that such involvement--by way of gender equity and family planning counselling--helped couples improve their communication about contraceptive practices and the use of contraceptive devices, and also reduced incidence of sexual violence.

The SHP fizzled out in 2009 after Mohite’s retirement, just when the programme was gaining traction. One health worker involved with the SHP is quoted in the paper as saying, “The results were very good because many newly married couples came and asked the Auxiliary Nurse Midwives for more information about it. Just as awareness was building up, the programme closed.”

In addition, three other pre-conditions can be gleaned from the successes and failures of other conditional cash transfer schemes in India, which could inform the conceptualisation, design and implementation of such programmes in future.

1. Plug leakages in the system

Where the scheme has failed is in reaching all its intended beneficiaries, with some beneficiaries having received less than optimum services.

“Reported Janani Suraksha Yojna-associated resource leakages suggest that some of the most deserving mothers and babies have not benefited,” said Poonam Muttreja, executive director, Population Foundation of India.

“With Janani Suraksha Yojna, we have heard of situations where staff did not pay mothers meeting the condition the full promised amount,” a health ministry official who requested anonymity, given the sensitivity of the topic, told IndiaSpend. Poor implementation creates “bad ambassadors for the scheme, who then--naturally--dissuade others from signing up,” he said.

The solution? Strengthen the administration of health schemes.

“Conditional cash transfers have been seen to deliver well in countries with strong social security systems, meaning where leakages are promptly dealt with,” Muttreja said.

It is not enough to create demand for a service by introducing a conditional cash transfer scheme. Robust logistics and supply management must follow.

Continuing with the example of Janani Suraksha Yojna, Muttreja said, “JSY has worked well where a good road infrastructure and effective 102/108 ambulance services exist to facilitate access to the health centre, and where caste prejudices have not hampered the provisioning of services to low caste people.”

To enhance the uptake of a scheme aimed at postponing childbearing, she said, “we should invest in improving the delivery of associated family planning services”.

“We need to tell people that babies born to younger mothers , even if they survive birthing, have lower birth weight, and end up developing more illnesses and burdening the nation,” the health ministry official said. He said educating people would work better than introducing yet another conditional cash incentive. At any rate, a cash incentive scheme would work only when supported by strong messaging.

A good example of poor messaging that has not changed mindsets and behaviour is Apni Beti, Apna Dhan (Our Daughter, Our Wealth)--a conditional cash transfer scheme introduced in Haryana in 1994, aimed at improving the status of the girl child in society, and of the mother in the family.

What exactly did an improved status for the girl child mean, beyond ensuring that a daughter remained unmarried until 18, when her parents would get the promised Rs 25,000 cash incentive? Apni Beti, Apna Dhan did not say, leaving participants to interpret for themselves.

“The lack of any effective communication and advocacy to participants about the core goal of the CCT [conditional cash transfer] (to enhance the value of girls) also suggests that people continued to interpret the programme and its benefits within their own cultural framework,” noted an evaluation report.

Most parents simply did not understand the rationale behind educating girls beyond grade VIII. In interviews to the International Center for Research on Women, which conducted an exercise to evaluate the scheme, some parents referred to it as a "kanyadaan programme", referring to the traditional "giving away" of the bride. This is possibly why 53% of the parents admitted to using the money for the girl’s marriage, more than twice the 23% of families that spent it on education.

“Parents thought the lump sum was to be used for dowry,” said Muttreja. “To invoke a behavioural change, the government should have paid more attention to educating people--especially men--about the thinking behind the scheme.”

This is why, despite Apni Beti, Apna Dhan having helped reduce the proportion of girls getting married before 18 years of age from 57% to 41% over a 13-year period, the scheme was largely a failure, as IndiaSpend reported in November 2015.

Success for a conditional cash transfer scheme is when a participant like Shinde says of the SHP: “It [participating] wasn’t about the cash incentive; it was to get to know my wife before we started a family.”