How Construction Industry Got Away With Not Paying Workers In Lockdown

Mumbai: Construction workers did not benefit from the central government’s March 29, 2020, order asking employers to pay full wages during the ongoing lockdown because there is no clarity in this heavily informalised sector about who the “employer” is--the subcontracting companies that recruit the labour for realty or infrastructure companies or the petty contractors who do the actual hiring--showed two recent field studies conducted by India Migration Now, a Mumbai-based nonprofit.

There are ambiguous hierarchies in the contractual employment practised in the construction industry: The realty/infrastructure company hands over specialised tasks to specific subcontracting companies, which then delegate the responsibility of arranging workers to petty contractors, who may be licensed or unlicensed, according to a 2012 study by Ravi Srivastava, former professor of economics at Jawaharlal Nehru University, Delhi. The labour in-charge who represents the management of the subcontracting company is responsible for the welfare of the workers and disseminates the workers’ wages to the petty contractors, who then distribute it among the workers once the task is complete. 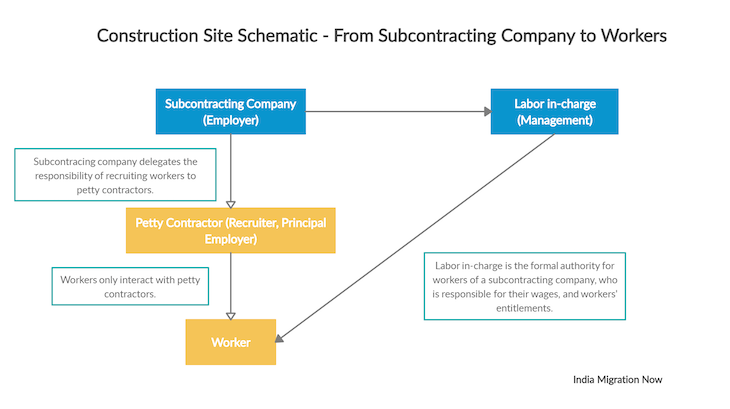 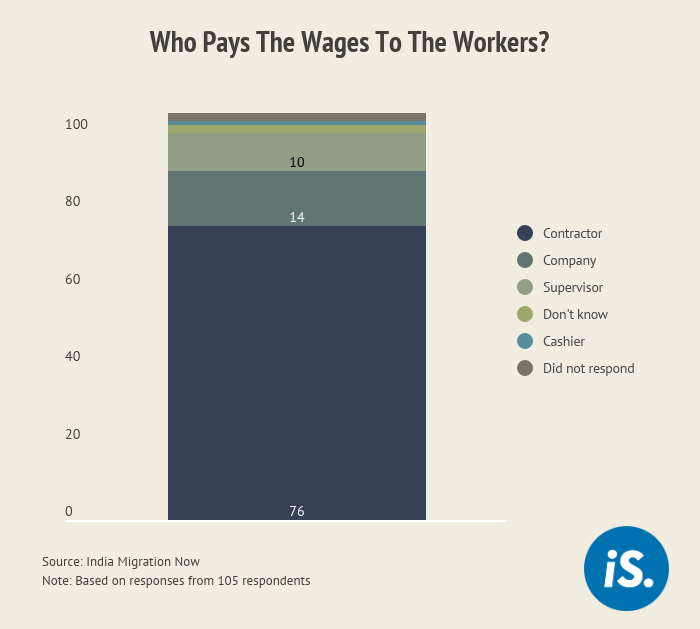 Almost 90% of the petty contractors said they had not been paid by the subcontracting companies during the lockdown and therefore, could not pay their workers, according to a survey conducted by India Migration Now (IMN), over two phases of the lockdown--phase one (March 25 to April 14, 2020) and phase two (April 15 to May 3, 2020).

An employer can be either a person who undertakes to produce a given result for any establishment through the employment of building workers (the subcontracting company) or someone who supplies building workers for any work of the establishment (petty contractor), as per the Building and Other Construction Workers (Regulation of Employment and Conditions of Service) Act, 1996.

In the construction industry, this dissonance between the definition of an employer in the legislation and the ground reality allows managements to deny their responsibility towards workers, we found. The lockdown worsened matters when the construction sector completely stalled in March 2020. This has resulted in the large-scale reverse migration of distressed workers who were left without any income or social security, as IndiaSpend reported on May 20, 2020.

The COVID-19 crisis has drastically hit the construction industry, the second-largest employer in India after the agricultural sector, employing about 50 million workers, according to Government of India’s official Invest India website.

There has been a significant increase in informalisation of the workforce in India--the percentage of all employees with any written contract fell from 25.4% in 2004-05 to 20.9% in 2011-12, as per the analysis by Srivastava, based on the latest National Sample Survey (NSS) data. This means that a large share of the construction industry is now reliant on informal forms of recruitment. In India, the informal sector within the construction industry amounted to 97.6% of total jobs and 99.3% for women, according to data from the 66th Round of the NSS (2009-2010), cited in the statistical estimate by International Labour Organisation.

The petty contractor is an important node in this informal system, providing labour to the subcontracting company, as we said earlier.

Considering the arrangement between the formal system (labour in-charge), and the informal system (labour subcontractor), the figure of an employer remains unclear. The law does not account for a situation when there is both a formal and an informal system of recruitment of workers--when at a particular site one figure undertakes to facilitate the output of an establishment, and another who provides the workers.

As a result, the petty contractor and the subcontracting companies often stand in tension over the definition of the employer. Up to 85% of workers regarded contractors as their employers, according to a study conducted by the Institute of Human Development (IHD) in 2016, indicating a clear blurring of demarcation between formal and informal modes of recruitment among workers.

The subcontracting company is responsible for ensuring the payment of wages to workers, but the labour contracting system has distanced the management from the workers and the onus of responsibility towards the workers lies entirely on the shoulders of the petty contractor, as Ravi Srivastava and Rajib Sutradhar argued in their IHD study.

The management of the subcontracting company is represented by the labour incharge, our field study among construction workers in Mumbai in March-April 2020. Of the 44 subcontracting companies deployed on a particular site, all had a “labour in-charge” whose primary responsibility was to look after the welfare of workers, including the timely payment of wages.

The payment to petty contractors is based on output, i.e., they are only paid after the completion of a task (for example, a petty contractor involved with tiling work will only be paid by the subcontracting company after the tiles are fixed), and a delayed payment by the contracting company means late distribution of worker wages. Worker absenteeism is one of the biggest issues at construction sites in India and payment delays are a major factor in this, found a 2016 survey-based study published by the American Society of Civil Engineers that looked at absenteeism and the turnover of migrant construction workers in India.

Return migration and its impact on contractors

The middleman or the petty contractor plays a significant role in workers’ migration decision: 94% of the migrant workers at commercial complexes and 86% at residential complexes said they had decided to migrate because of the middlemen, found a 2016 study conducted by the IHD. The petty contractor not only funds their travel from home to the destination but is also responsible for providing shelter and food at the destination. The pecuniary nature of this assistance is considered an “advance” or ”loan” and has to be repaid once the worker starts on the job.

With the construction industry at a standstill during the lockdown, contractors do not have sufficient finances to pay advances to workers. The 25 petty contractors we interviewed said they had been paying workers who chose to stay or were stuck at their destination from their own pockets.

In phase two of the lockdown, contractors said, their average expenditure was Rs 1,000 per worker. Petty contractors who have more workers have had higher consolidated expenditure.

Up to 42.6% of rural-urban migrants in the construction sector are interstate migrants and 52% of them travel to the top eight metro cities for work, according to a 2017 report published by the Centre for Policy Research.

As the savings of petty contractors deplete, they will not have reserves to provide advance payments to workers to motivate them to migrate to urban centres or to bear their migration costs, thus slowing down economic recovery. This will also jeopardise their arrangement with the subcontracting companies, which might then look at other petty contractors who can supply them the requisite number of workers--but at the cost of labour welfare, contractors said in the interviews conducted by IMN with them.

(Rawat and Singh are researchers at India Migration Now, a Mumbai-based migration, data, research and advocacy organisation. Follow their work on @nowmigration. This piece was written with inputs from Manish Maskara @maskaramanish25)