How Caste Impacts Migration And Its Benefits

Mumbai: Poverty and lack of opportunity in their hometowns drove 93 million Indians from disadvantaged castes and tribes in 2011 to migrate to other areas within their states in the hope of securing education or employment. However. they continue to face social segregation, labour market discrimination and barriers to accessing the most basic services, finds an analysis of Census data and research studies by India Migration Now, a Mumbai-based non-profit.

Internal migration, both within a state and across states in India, improves households’ socioeconomic status, and benefits both the region that people migrate to and where they migrate from, as IndiaSpend reported in August 2019. Remittances can help reduce poverty in the migrants’ places of origin.

But scheduled castes (SC)--castes considered ‘lower’ in the social hierarchy--and scheduled tribes (ST)--indigenous tribal populations--benefited less from migration as social discrimination continued to impact them in the places they migrated to, research shows.

Exclusionary government policies often push migrants, from all social groups, to the fringes of cities that have limited civic infrastructure and municipal facilities, which makes migrants prone to poor health and living conditions, as IndiaSpend reported in October 2019.

The impact of such policies on migrants from the SCs and STs is greater, as those belonging to these groups are also some of the poorest in the country, shows an analysis of data from the government’s national sample survey on expenditure in 2011-12, published in the Journal of Social Inclusion Studies.

For instance, when migrants move away from their hometowns, they can no longer access the benefits of state-specific schemes such as the public distribution system. This impacts the poorest and food-insecure the most. Those from the scheduled castes and tribes cannot avail of reservations--which try to correct historical discrimination against these groups--in state government jobs and state-run educational institutions when they migrate from one state to another, the Supreme Court ruled in 2018. 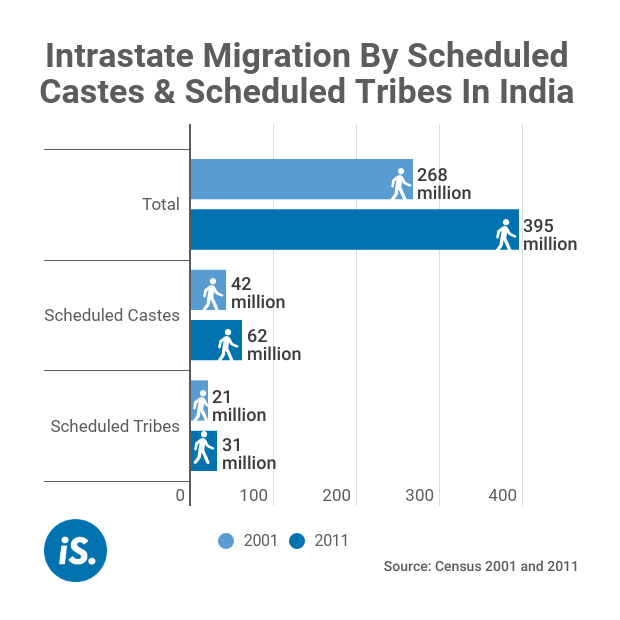 Migration patterns and its impacts are based on a household’s caste, found a 2016 study from Beed in Maharashtra, published in the Social Science Spectrum. For Dalits, Vanjaris and Muslim migrants, sugarcane cutting was a long-term, permanent activity undertaken for generations. For dominant castes, such as the Marathas, it was undertaken for a couple of years in response to shocks or crises.

In India, a ‘dominant caste’ refers to “a single caste in a specified region that usually has control or ownership of most of the agricultural land, is numerically significant, and as a result, holds a dominant position in that region”.

Whether migration leads to accumulation of wealth or not is also influenced by caste, networks, and land possessed, Kalyani Vartak, the author of the Beed study, concluded, based on her assessment of intergenerational migration in different caste communities. Families that were only seasonally involved in sugarcane cutting were better off than those involved in the job permanently, the study found.

There are overlaps between a migrant’s social and economic status. People from the general category and Other Backward Classes (OBC) have higher chances of migrating and bearing the cost of migration. The disadvantaged castes are often unable to gain the benefits of migration. Migration pays off if the worker is from a higher caste, found a 2018 study linking caste and job market participation among migrants in the slum areas of four Indian cities--Ludhiana, Ujjain, Mathura and Jaipur.

Social segregation of the labour market

Communities that have been historically at the lower end of social groups are also the most disadvantaged in the labour market, found a 2018 study in southern Rajasthan by the Aajeevika Bureau, published in the Journal of Interdisciplinary Economics.

Over 79% of the migration (mostly men) in the study was inter-state, with Gujarat as the most popular destination. At the destination, the work was disaggregated based on caste, leaving STs no choice but to work at the lowest end of the labour market. Among ST migrants, more than half worked as helpers and about 30% worked as masons, the study found. Other migrants from the ‘general’ category and OBCs performed more skilled tasks.

Migrants from the ‘general’ category have better qualifications for urban job centres, because of the historical advantage of education and are therefore able to find higher-paying jobs in urban areas.

Women from SCs and STs often migrate from one rural area to the other because of displacement and loss in the ownership of forest resources, a 2012 study on gender and migration, conducted across 20 states of India by the Centre for Women’s Development Studies, Delhi between 2008 and 2011 showed. 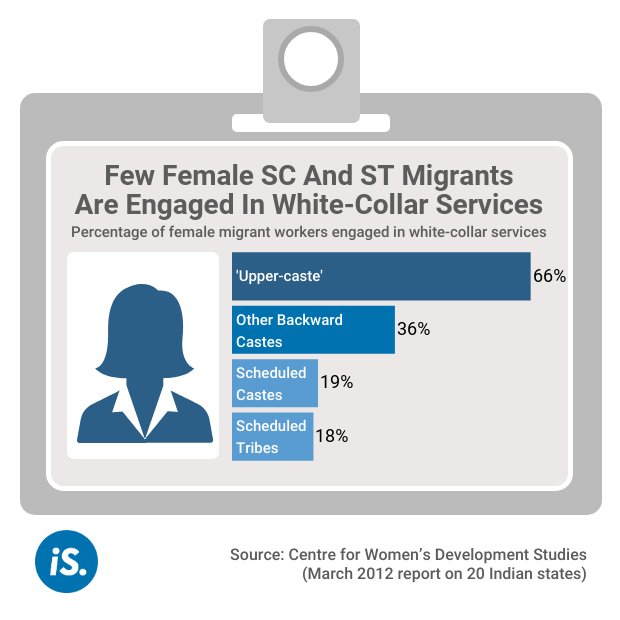 Most tribal women were concentrated in the construction sector, lower-caste women in sectors such as brick-making, and OBC migrant women worked as paid domestic workers and seasonal agricultural workers, according to the report.

Of a sample of 1,600 families surveyed in four states, more than three-fourths of migrant tribal women from Chhattisgarh, Jharkhand and Odisha worked as domestic servants while migrant tribal women from Madhya Pradesh were engaged in wage employment, found a 2010 report by the Society for Regional Research and Analysis. The report also found that long-and medium-term female migration was dominated by migrants from the ‘general’ category, while most tribal women migrated for the short or medium term.

In Kerala, even though Hindus are the single largest segment of the state’s population, more Muslims emigrate than Hindus. This is because of a history of maritime trade with the Arab region which began as early as the ninth century and was fuelled by the spice trade. In the 1970s, when Kerala had high unemployment, it became lucrative to move to the Gulf region to fill the surge in demand for skilled and unskilled labour.

SC/ST community emigration has reduced in Kerala, found eight rounds of the Kerala Migration Survey, conducted by the Centre for Development Studies in Trivandrum. In 1998, 1.4% of emigrants were from the SC/ST community which reduced to 0.9% in the 2018 survey. Together, SCs and STs make up 3.3% of Kerala’s population. The low SC/ST emigration deepens caste inequalities as remittances play a crucial role in Kerala’s economy and the prosperity of its population, according to a 2017 study published in Routledge India.

Even when those from the lower castes emigrate, they face discrimination. As many as a quarter (26%) of 1,500 Dalits from South Asia interviewed in the United States of America had faced physical violence because of their caste, while 20% reported discrimination at their workplaces, according to a survey conducted in 2016 by Equality Labs, a US-based research organisation.

The survey also found that 40% of the respondents were made to feel unwelcome at their place of worship, 40% said they were rejected as romantic partners because of their caste and 60% had experienced caste-based derogatory jokes and comments.

It is tougher for female emigrants, who often face violence and abuse at destination countries and are unable to reach out for help as many are isolated as domestic workers in households, said Sister Lissy, the founder of the National Workers Movement, a Hyderabad-based non-governmental organisation that works for the welfare of female emigrants. “However, over the years, awareness among women migrants has increased and made them more confident.”

The government released the Draft Emigration Bill 2019, which aims at promoting and protecting the welfare of emigrants. This Bill aims to change the Acts of 1922 and 1983 where the focus was to control and regulate all the stakeholders involved in the process of emigration. But the new draft remains detached from social realities as it does not consider the rights of migrants. This leaves migrants at the lowest rungs of the social hierarchy unprotected.

Equality movements can minimise the impact of caste in migration

Movements, such as the Ravidassia movement in Punjab (which combined the tenets of Sant Ravidass’s teachings with Ambedkar’s beliefs), help those belonging to disadvantaged communities access education, hospitals/clinics and safe social spaces. The movement has also helped these communities gain more from migration, a 2008 study published in the Journal of Asian Studies showed.

Ravidass deras (small organisations dedicated to a cause) were pivotal in disseminating the messages of an assertive identity across villages through songs, literature, and poetry especially among the Chamar community, caste believed to be ‘lower’ caste, which had been one of the most marginalised in Punjab. The movement, however, could not manage to gain a stronghold in the Malwa and Majha regions of Punjab.

The Doaba region of Punjab has the highest percentage of Dalits and is the source for the highest proportion of overseas migrants from Punjab, 2011 census data show. Punjabi migration in Spain began in the mid-1980s because of friendlier migrant policies in southern Europe in comparison with central European nations such as Germany, which remained conservative in terms of their labour market.

(Singh and Rawat are researchers at India Migration Now, a South East Migration Foundation Venture based in Mumbai, India. Follow their work @nowmigration.)