How Cancer Strikes Where You Least Expect 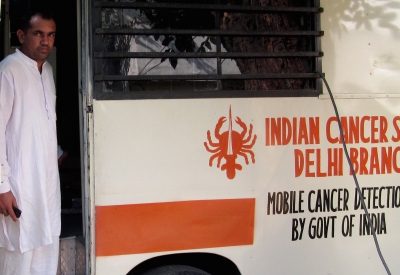 Some 0.7 million new cases of cancer are reported every year in India. It is estimated that there are 2.5 million cancer cases at any point of time and the disease claims around 0.4 million deaths annually. India represents about 8% of estimated global cancer deaths and about 6% of all deaths in India.

And yet, as IndiaSpend’s Sourjya Bhowmick finds, there are some interesting trends in the manner in which the disease strikes. Some regions and cities are evidently more vulnerable even as the aggregate numbers rise.

Data for 10 cities that are part of the population-based cancer registries maintained by Indian Council of Medical Research (ICMR) show, for instance, Ahmedabad has the highest percentage of tobacco-related cancer cases and Delhi has the lowest cancer mortality.

The impediment in identifying and treatment of any disease is when it goes unreported. The National Cancer Registry Programme (NCRP), a part of ICMR, has developed an ‘atlas of cancer’ in International Agency for Research on Cancer (IARC), a wing of World Health Organisation (WHO), has applauded India’s cancer statistics as a model to be followed.

Let’s take a look at the number of cancer cases registered under NCRP in a few cities: 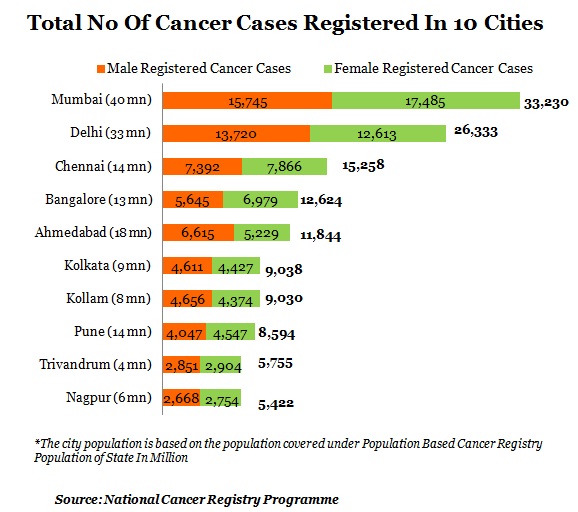 Mumbai (over 33,000) and Delhi (over 26,000) have the highest registered cases due to the sheer size of population. Pune, which has a population of 14 million (more than Bangalore and nearly same as Chennai) has fewer number of cancer cases registered.

Like we said earlier, 6 out of the 10 cities have more number of female cancer patients. They are Mumbai, Chennai, Bangalore, Pune, Trivandrum and Nagpur.

Tobacco-Related Cancers (TRCs) is one of the most fatal forms of the disease. Let’s see the distribution of TRCs in these cities: 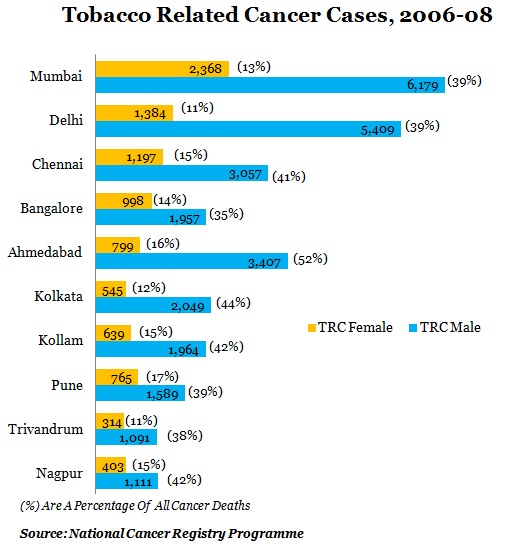 Ahmedabad has the highest number of TRCs followed by Kolkata (TRCs male) and Chennai, Nagpur and Kollam (TRCs female).

Here is a look at the mortality rate against the incidence of cancer for all these states; 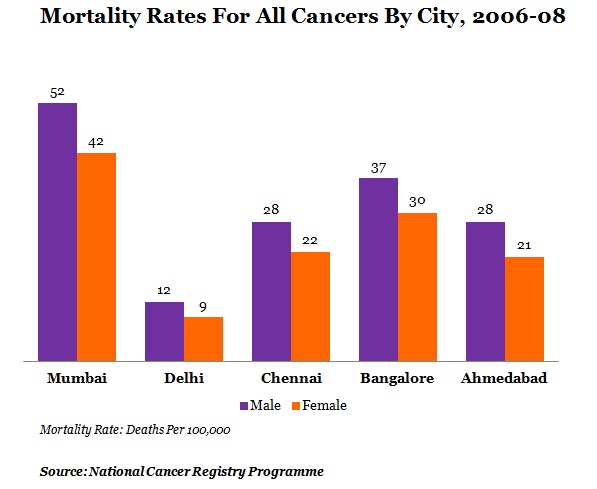 Mortality, as a percentage of total incidence, is the highest in Mumbai followed by Kollam (male mortality) and Kolkata (female mortality).Delhi has the lowest mortality rate.

Contrary to conventional wisdom, cancer is not a disease of only the rich and educated. Recent data published in the medical journal, The Lancet, found that the age-standardised rates of cancer deaths were more than twice as high in the least educated (illiterate) as compared to the most educated (secondary or higher education).

The authors also noted that in over 80% of the cancer deaths in their study, the individual did see a doctor but the high mortality rates suggest that they went to the provider after it was too late and reached the terminal stage.

So, what is the Government’s role in generating awareness and treatment of cancer apart from the registration model?

The Government has the National Cancer Control Programme that provides financial assistance upto Rs 5 lakh to voluntary organisations recommended by the state governments working in early detection activities. It also provides Rs 10 lakh every year to districts selected under the cancer control scheme.

The Government has also launched the National Programme for Prevention and Control of Cancer, Diabetes, Cardio-vascular disease and Stroke (NPCDCS), which will be implemented in 100 districts across 21 states. Some 65 medical colleges will be provided assistance worth Rs 6 crore for strengthening cancer care facilities during the period 2010-2012.

These new facilities, along with the implementation of the scheme to provide universal health insurance will enable those, especially less educated and poor patients, to receive treatment sooner and hopefully reduce mortality rates.