How Bengal Lost An Opportunity To Change Its Economic Course 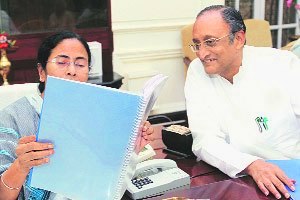 When & where did West Bengal’s problems really begin? A question like this could spark off a plethora of tomes, debates & addas (intellectual gatherings) that might last, well, for a long time.

IndiaSpend’s Dhritiman Gupta instead looks at available data closely to ask if the people of Bengal could have seen the alarm bells and acted earlier. The answer is that while many feel Bengal’s irreversible decay began in the 1970s, the data shows that the state could have well reversed course in just the last decade.

Admittedly, this is a somewhat limited data-led argument (as opposed to political or socio-cultural), but it also brings us to a more general question; can an engaged citizenry be more alert to data points – for instance a combination of slowing agricultural growth or industrial growth, particularly in contrast to similar states or the country as a whole. And thus demand remedial action?

Let’s begin in 2006 when a Left Front government headed by Chief Minister Buddhadeb Bhattacharya came to power with a huge majority. The problems began there. After 5 years, with an incomplete auto (Nano) project at Singur, a debacle in Nandigram and few achievements to show, the Left was handed a massive defeat. The first in 34 years.

What the Communists left behind was a state that was industrially backward, agriculturally stagnating and in financial doldrums. Let’s look at the growth rate of GSDP in West Bengal in the past 20 years, particularly relative to its backward neighbours like Orissa and Bihar.

A look at (Table 1) shows us that West Bengal, has maintained a steady growth rate since 1994-95, but failed to take off. It could never break the double digit growth barrier. On the other hand Orissa had a golden period over 2003-08 when it consistently grew at double digit rates. Even after 2008, Orissa has consistently grown faster than Bengal.

Now, why could Bengal never take off like its neighbours? The answer is probably the lack of industries and industrial growth. But we will look into the agricultural as well as the industrial growth numbers.

Bihar and Orissa have shown marked improvements in agriculture. Orissa’s agricultural sector was growing at an average rate of 1.7% over 1996-05. Since 2004-05, the growth rate has improved to 2.9%.

Let’s look at industrial growth rates. Planning Commission figures are available only since 2000.

Industrial sector in West Bengal has also seen a slowdown. The average growth rates fell from 6.0% over 2000-04 to 3.3% over 2004-09. Over the same period Orissa improved its industrial growth numbers by 11.2 percentage points.

In Bihar, industry grew at about 5.8% over 2004-09. But this performance was commendable given the fact that 2000-04 had been a period of industrial deceleration at 4.7%. The improvement in industrial growth rates made by Bihar stood at an impressive 10.5 percentage points.

Hence as can be seen, both agriculture and industry have grown slowly in West Bengal since 2004-05.

Though despite the slowdown, Bengal could maintain a steady growth rate of 7% probably due to the services sector (data for which is not available at this point).

However, Bengal could never break the double digit growth barrier because of the slow growth in industrial and agricultural sectors. While Bihar and Orissa accelerated to take off onto a high growth path, Bengal has been left behind.

That answers the specific question. The general question was whether an alert and aware citizenry can make Government accountable for performance and thus force course corrections? Almost like in a corporation? The answer might be wishful but we feel it’s a yes. The level of scrutiny at a national level on issues like subsidies already reflects this trend.