How Assam Loses Land, Lives, Livelihoods To Its Rivers

The state’s vast network of rivers floods its valleys every year, causing an annual loss of Rs 200 crore, on average. Even after the floods recede, the state will continue to lose land and livelihoods to its rivers. We explain how.

Assam’s land is composed almost entirely of river valleys. The geographical area of Assam is 78,438 sq km, of which 56,194 sq km is covered by the Brahmaputra river valley. The Barak river valley, along with two hill districts, makes up the remaining 22,244 sq km of the state. 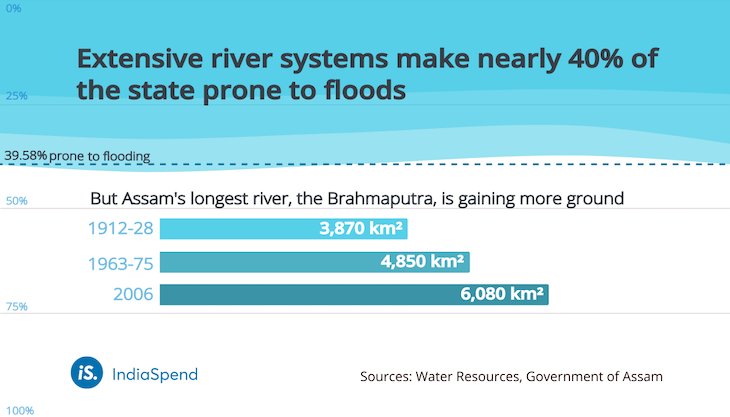 However, Assam’s longest river, the Brahmaputra, has been claiming more ground by eroding its banks. When it was first surveyed over the years 1912-28, the river covered an area of 3,870 sq km. This area increased 57% to 6,080 sq km by the year 2006. The river is 5.46 km wide on average, but has widened to 15 km in some places through erosion. 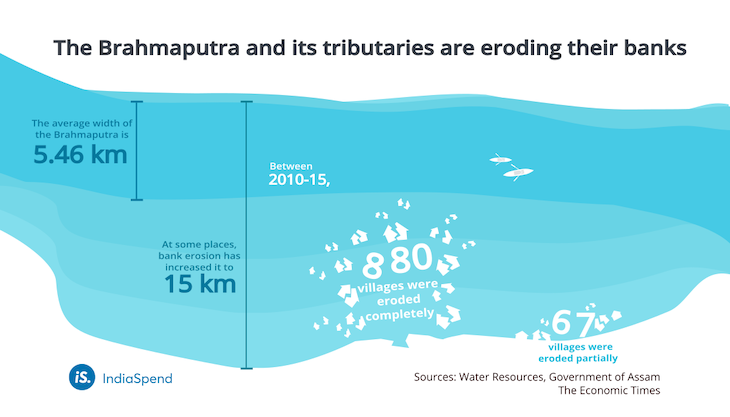 Eating away at it own banks, the Brahmaputra and its tributaries have destroyed entire villages. Between 2010 and 2015, 880 villages were completely eroded, 67 villages were partially eroded, and 36,981 families lost their homes to erosion during this five-year period. 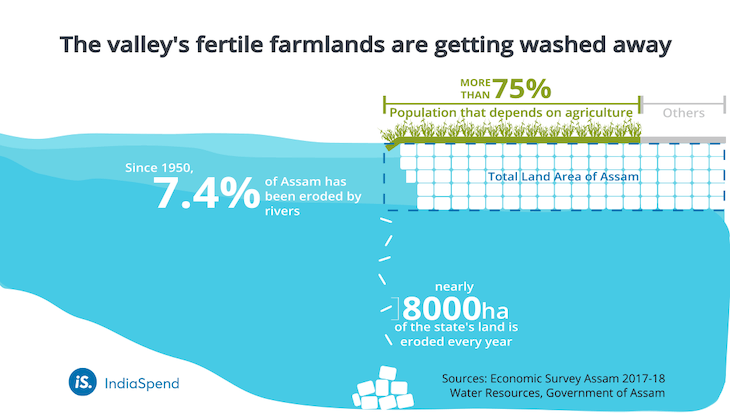 In addition to homes, Assam’s families are also losing farmland: 3,800 sq km of farmland--an area larger than Goa--has been lost to erosion since 1954. Land is a vital resource in the state, since over 75% of Assam’s population depends on agriculture for their livelihood as farmers, agricultural labourers or both. A loss of land usually means a loss their livelihood.

With more than 85% of all farmer families in Assam classified as small or marginal farmers--owning just 0.63 hectare on average, about the size of the smallest football field--many are at risk of losing all their land to erosion.

The annual report of the Brahmaputra Board stated that, between 1988 and 2015, the river had also deposited land on its banks.

However, although 208 sq km (20,800 hectares) of land had been deposited on the Brahmaputra’s banks, more than three times that had been eroded.

The report also said land deposited by a river can be used for cultivation only after the formation of topsoil, generally a multi-year process. This means it will take several years to gain back the farmable land lost in a year.

Meanwhile, the state continues to lose 8,000 hectares of land to the river every year. Since 1950, a total of 427,000 hectares of land have been lost to the Brahmaputra and its tributaries, according to the Water Resources Department of Assam. This amounts to 7.4% of the total land area of the state.

Till date, Assam’s water resources department has not implemented any long-term measures to tackle the erosion problems of the state.

It has focused its efforts on managing floods, implementing measures that are immediate and short-term, such as constructing embankments. The department has built 4,473 km of new embankments and strengthened 655 km of embankments so far. However, the embankments are commonly breached due to bank erosion, according to the department. 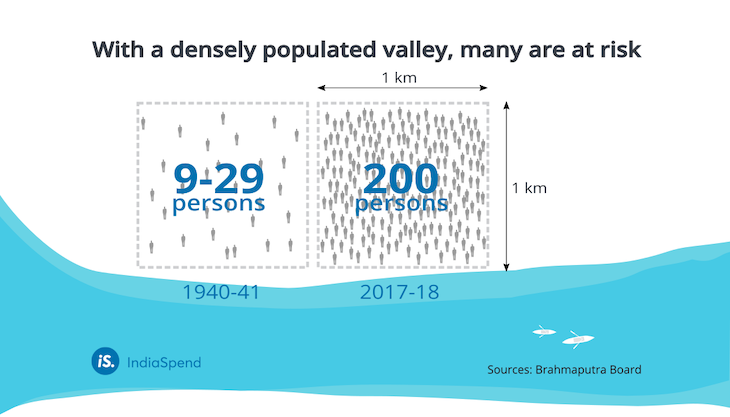 (Ahmed is a graduate of architecture from the University of Kent and is an intern at IndiaSpend.)