How A Third of India’s Judiciary Just Does Not Exist 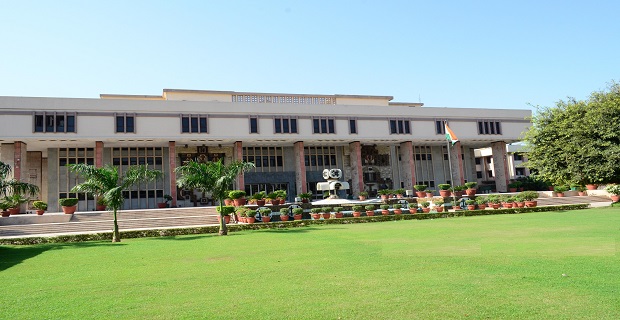 *India has only 18,000 judges at the subordinate level, which comes up to about 13 judges per million

*Over 4.3 million cases are pending in various High Courts across the country

High profile criminal cases – like the recent murder and rape cases in Delhi & Mumbai – usually trigger loud calls for 'fast track’ justice. The term itself means that the case is being pulled up against all other pending cases and being fast-tracked in order to deliver speedy justice.

So the more basic question. Why do cases languish for so long? Why does justice almost never arrive in time for most of India’s justice-seekers?

A key reason is there are simply not enough judges. Not even enough to fill the vacancies that exist, let alone expanding and creating more.

Part of the problem could lie in the very manner in which judges are appointed. In India, the Collegium system of appointment of judges in which judges select their own has clearly failed to build capacity.

For starters: India’s judiciary is operating at only a little more than 2/3rd of its capacity in the higher judiciary (High Court) with some 4.3 million pending cases. Across the country, 30% of judge positions are vacant in the High Courts.

There are a total of 21 High Courts (HCs) in India, and they are the overarching appellate courts for the subordinate courts in each state. Appeals against the High Court rulings go to the Supreme Court (SC).

Allahabad High Court is now operating at less than 50% of sanctioned capacity. Not surprisingly, perhaps, there are over 1 million pending cases at the High Court.

The other High Courts with large vacancies include Punjab, Haryana, Calcutta, Andhra Pradesh and Bombay.

The sanctioned strength (by the Government) of the judges was increased significantly in 2007. This was meant to increase the judge-to-population ratio in the country. Actually the opposite happened: instead of the number of judges increasing, the number declined as can be seen in Table 1. 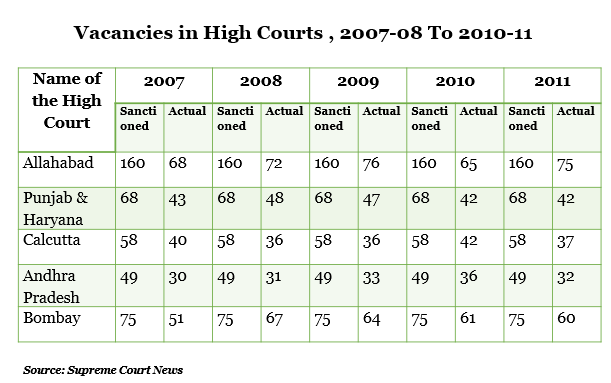 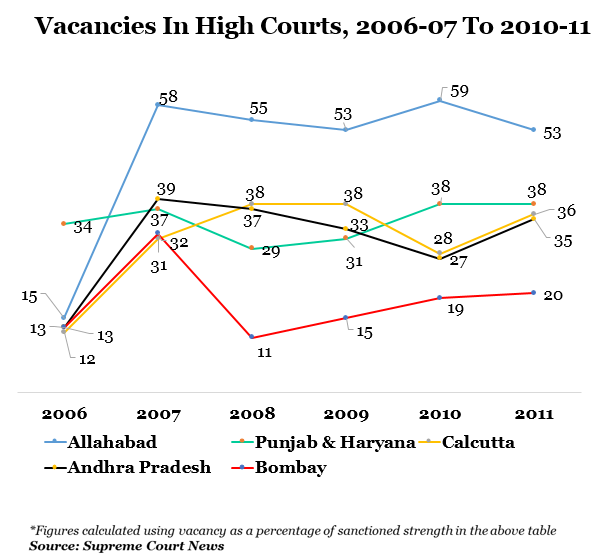 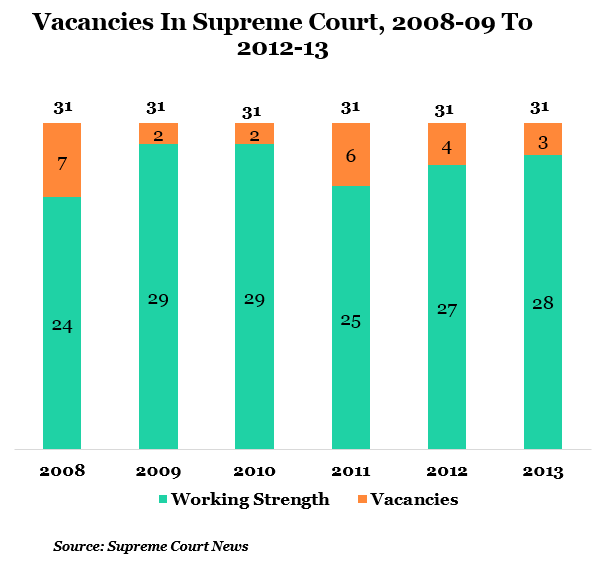 The civil and criminal courts below the High Courts are referred to as subordinate judiciary. The appointment to this level is governed by Articles 233 to 237 of the Constitution.

The structure of the subordinate judiciary on the civil side is generally:

On the criminal side;

The District Judges are appointed via:

Interestingly, the problem of judge vacancies is not as acute in the lower courts compared to the High Courts. In 2011, the lower courts across the country were functioning at 20% below their capacity.

Yet, the gap between sanctioned strength and actual strength has been widening since 2007. Out of a total 17,945 sanctioned positions, only 14,275 have been filled. And the pending cases in 2012 were 27 million cases.

If we exclude smaller states in the North-East, Gujarat has the most vacancies in the subordinate courts. Uttarakhand and Bihar also have high judge vacancies. Kerala and Maharashtra are doing relatively well although 10% of the sanctioned strength is yet to be filled. 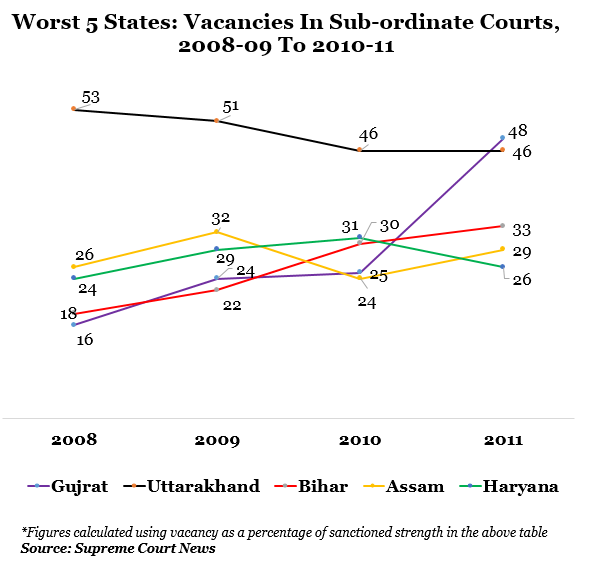 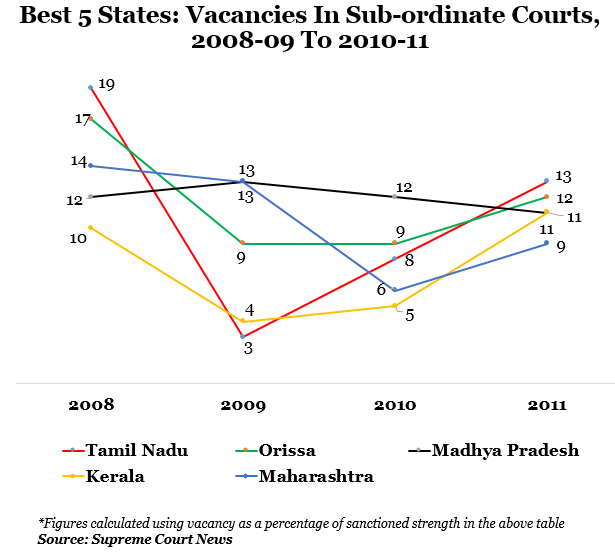 One reason for the gap, as we mentioned at the outset, is the very process of appointment of judges. (For a background and understanding of the Collegium system, refer to the text box below.)

The Government recently introduced a bill in the Rajya Sabha for scrapping the Collegium system of appointing judges in the country.

The Bill seeks to set up a Judicial Appointments Commission (JAC), which will make recommendations for the appointments and transfers of Supreme Court and High Court judges.

The report also says that the executive cannot initiate the proposal for appointments as a result of a SC judgment. So, the inordinate delay in filling up vacancies is due to the Collegium process of appointments, and there is a serious need to review the system.

With the creation of the JAC, the executive will have a say in the appointment process. The JAC will include the Chief Justice of India (CJI), two senior-most judges of the Supreme Court, the Law Minister, Secretary (Justice) in the Law Ministry as convener and two eminent persons as members.

The new system to appoint judges might be a solution, assuming there are enough candidates who fit the bill. Even if the judges are found in the coming years, and cases do get cleared faster, for most, the prospects for justice will still be a distant dream.

How Does The Collegium System Work?

Clause (2) of Article 124 of the Constitution says that every Supreme Court (SC) judge shall be appointed by the President in consultation with the Judges of the SC & of the HCs as he may decide. The appointed Judges shall hold office till the age of 65 years.The Article also has a proviso which says that in case of appointment of judges other than CJ, the CJI shall always be consulted.The National Commission to Review the Working of the Constitution in their report says that having regard to the executives’ propensity to control every organ of state and every institution of governance, leaders at the time of Independence departed from other constitutional systems to put the appointment of judges in the hands of judiciary and make the role of the executive merely formal.

Several important judgments have to be considered when we consider the issue of appointment of judges:

In 1998, the principles laid down in the SCAORA case were reaffirmed. And the current Collegium system was established. It was held that the recommendation should be made by the CJI and his four senior–most colleagues (instead of CJI and two senior-most colleagues earlier). For appointments of High Court judges, the CJ of the respective High Court along with his two-senior most judges make recommendations for appointments.