Pandey proceeded to tell Paswan about mMitra, a free pre-recorded voice-message service that gives pregnant women information about taking care of themselves and their newborns. This was Paswan’s second pregnancy, and this time she had chosen not to go to her Uttar Pradesh village but to deliver at the nearby government hospital. Since she would not have her mother or mother-in-law to guide her, mMitra’s twice-weekly calls would keep her adequately informed, Pandey assured her. 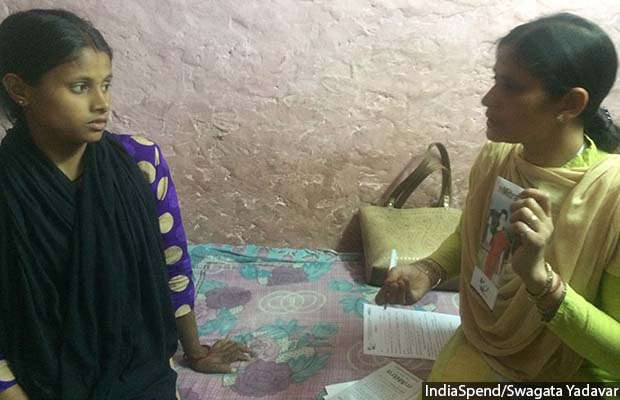 Health supervisor Daya Pandey telling Sushma Paswan, 24, about mMitra service in the latter’s home in West Delhi’s Sagarpur area. mMitra is a free pre-recorded voice-message service that gives pregnant women information about taking care of themselves and their newborns.

Outside, children bathed at a hand-pump while older men chatted on charpoys. Sagarpur is a typical low-income neighbourhood in an Indian city, comprised of single-room homes with asbestos roofs packed tightly together, with few civic amenities such as drainage and water supply.

Most of its residents are migrants from other states. The men work as labourers in nearby factories while the women look after the homes and supplement their incomes by doing job-work for clothing units. Not so long ago, most women used to go back to their villages when pregnant or delivered babies at home.

Today, more and more women are choosing to have babies in hospitals, thanks at least partly to mMitra’s efforts to spread awareness about the benefits of institutional delivery.

mMitra, roughly translating as ‘mobile friend’, is a service launched in 2014 by the non-profit ARMMAN (Advancing Reduction in Morbidity and Mortality of Mothers, Children and Neonates). It provides comprehensive preventive information to 1.6 million women across nine states in India, with an aim to reduce maternal and child morbidity and mortality.

This matters because 45,000 mothers die during childbirth in India every year--one every 10 minutes--accounting for 17% of maternal deaths in the world. Further, 300,000 babies in India do not survive the first 24 hours after birth.

Much of this can be prevented if expectant mothers are given better care--if they undergo regular check-ups, have the right vaccinations on time, and seek early medical attention in case of complication.

The resultant gap in care and information is what mMitra wants to fill.

It enrols expectant mothers under two verticals--either through health workers posted in antenatal clinics of municipal hospitals or through partner NGOs working in slum communities. More than 3,000 sakhis (‘female friends’) have been trained in nine states to enrol women in the early stages of pregnancy. The sakhis get a small incentive for enrolling each person by filling out their form and noting down their details. To register, a woman must give her own or her husband’s mobile number.

Mobile phones are nearly ubiquitous in India--there were 998 million active mobile phone subscribers in March 2018, according to a May 2018 press statement by the Telecom Regulatory Authority of India, implying that a vast majority of Indians have a mobile phone.

The content of mMitra messages is simple, such as telling an expectant mother how her baby would be growing that week of her pregnancy, informing her of the importance of iron and folic acid supplements, what foods she needs to eat and the vaccinations she must get. After birth and until the baby turns one, the information is about what to expect as the baby grows and how to take care of it.

What makes the information stick is that it reaches the mother at a time of her convenience, in her respective mother tongue and at the relevant stage in her pregnancy. Three attempts are made to reach out to each registered mother each week, but if a woman misses her calls, she can give a ‘missed call’ to get her information.

After she delivers (or aborts or miscarries), she can give a missed call to have the service call her back and note the development.

In this way, mMitra puts the mother at the centre of her own and her baby’s care.

This is the basic idea that guided Aparna Hegde, a urogynaecologist, when she started ARMAAN in 2014. Working as a resident doctor at Mumbai’s Lok Manya Tilak Municipal General Hospital, better known as Sion Hospital, Hegde had been aghast at how many pregnant women died in hospital from largely preventable causes. 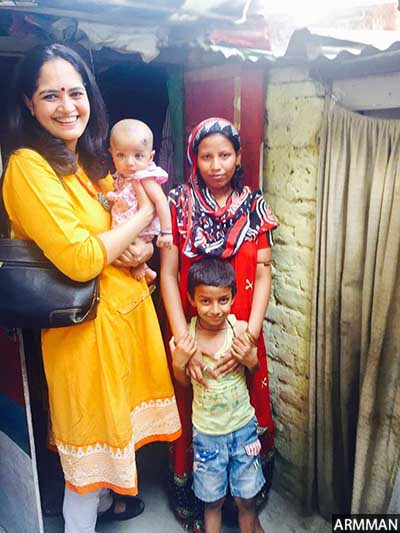 Aparna Hegde, a urogynaecologist, started ARMAAN in 2014 after observing how many expectant or new mothers died in hospital from largely preventable causes.

Hegde often narrates the case of Aruna, who she attended to in the third month of her residency. Aruna had gestational diabetes but was probably unaware of it. She had visited her local government hospital for only one antenatal check-up. During delivery, the doctors found the baby’s head stuck, but by the time Aruna was transferred to Sion Hospital, the baby was dead and Aruna had developed gangrene. Three days later, Aruna lost her life.

Hegde realised that Aruna and her baby’s deaths could have been prevented with counselling. This set her thinking, and she zeroed in on mobile phones as a channel to provide information directly to expectant and new mothers.

“Current models of care are fully dependent on human beings--on them [mothers] coming to the hospital or ASHAs [Accredited Social Health Activists] going from home to home,” Hegde told IndiaSpend. “Pregnancy is a very dynamic process and for an individual to go and receive comprehensive information is rare.”

Babita Jaiswal, 30, lives in a regularized “JJ colony”--or jhuggi jhopdi (huts or shacks) colony--in Shiv Vihar, West Delhi. A mother of three, she said she learned some new things from mMitra. “I am very careful of cleanliness now. I always wash my hands before feeding him,” she said. She changed many habits and now takes her youngest, a boy, to the doctor whenever he is unwell, something she may not have done before. 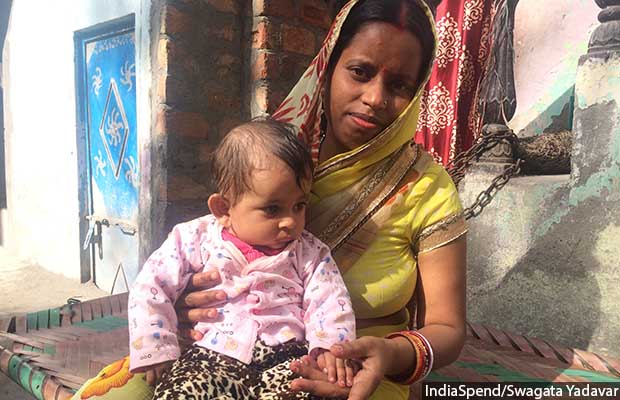 Babita Jaiswal, 30, a mother of three, registered with mMitra during her last pregnancy. “I am very careful of cleanliness now. I always wash my hands before feeding him,” Jaiswal told IndiaSpend referring to her youngest, a boy.

Much can go wrong when a mother is not properly informed. And information can work wonders.

Only 9% of mMitra beneficiaries experienced pregnancy-related complications, showed a midline survey conducted in Sion Hospital where mMitra conducted its pilot. Earlier, 38% of women had experienced complications. As many as 83% of expectant mothers understood the benefits of exclusive breastfeeding, compared with 68% in the baseline survey.

mMitra also changes the family dynamics--men and other family members who listen in on the call also get sensitised to the mother’s needs and take better care of her. Women say they feel empowered because someone is taking care of them.

Since the project works with technology and is easily scalable, ARMMAN has taken it across nine states through partnerships with 98 hospitals and 41 partner NGOs.

Through hospitals and communities

In Delhi, mMitra works with 10 hospitals and through 10 NGO partners.

Bharati, one of the sakhis who works in a JJ colony and enrolled Jaiswal, who we met earlier, was trained by the Society for Participatory Integrated Development (SPID), which partners with mMitra. “I feel good doing this work… There were many women delivering at home before, now we tell them why it is important to have babies in hospital,” she said.

Sakhis like Bharati go door-to-door to spread awareness and register women. They earn Rs 35 per enrolment.

On most weekdays, Daya Pandey, mentioned earlier, and Vinita Singh, 36, both social workers and now working as health supervisors with SPID for mMitra, work in the Dadadev Matri Avum Shishu Chikitsalaya in Dadri, West Delhi. Their primary task is to inform pregnant women about mMitra and get them enrolled. They have also been running the ‘Infant and Young Children Feeding’ Programme for the hospital as well as giving family planning counselling on hospitals’ request. “We enjoy our work. There is definite change in the women’s behaviour after counselling,” said Vinita Singh.

“There are many health schemes that can help pregnant women and children but hospital staff is often too busy to counsel women and give them health advice,” said an officer working in North Delhi Municipal Corporation, who requested anonymity, “mMitra can fill that gap.”

Mhealth, or the use of mobile phones for health purposes, has the potential to enable accessible and low-cost interventions. A systematic review of 19 studies of mhealth interventions showed promise in improving maternal health but called for more high quality studies before scaling up.

ARMMAN is also in the process of publishing results of the studies they have conducted recently.

One study has shown that knowledge about pregnancy and child care, including the frequency of visits to the doctor, supplements to be taken during pregnancy, initiation of breastfeeding and harms of prelacteal feeding (any food other than mother's milk given to a newborn before initiating breastfeeding--a major barrier to exclusive breastfeeding, which is considered the gold standard in infant nutrition), were higher in mMitra subscribers than among women from another group who were not mMitra subscribers.

ARMMAN’s work has earned it the WHO’s Public Health Champion award for 2017, in addition to awards, cash prizes and research grants from various sources.

ARMMAN is now expanding to other programmes such as mKhushali to support Auxiliary Nurse Midwives (village-level women health workers) in identifying and referring high-risk pregnancies and infants using mobile apps, as well as Arogya Sakhi, a home-based antenatal and infancy care programme that trains women from the community to provide affordable care and also earn from it. Another mMitra component aims to prevent malnutrition by providing nutrition counselling to mothers until their children are three years old.