K.B.Vasanthi, 48, is a block panchayat member in Thalikulam block, Thrissur. She has been working under MGNREGS since 2008, and says if it weren’t for these wages, she would not have thought of contesting elections.

Vasanthi has continued to work under MGNREGS despite being an elected local-government representative, although not as much as before. “My husband has health issues and the money he earns from fishing hasn’t been great for a while. We had loans to pay and three children to take care of. MGNREGS work has been of great help,” she said.

Such high participation of women in manual labour was not always the norm in Kerala. In 2005, just 15.9% of the state’s women worked for a living, when the national average was around 30.7%.

“Back then, people thought it strange that we were doing manual labour, and made fun,” Devayani Kuttan, 52, who has been working under MGNREGS since 2008, told IndiaSpend, “They thought it was not worth it.”

The role of Kudumbashree, Kerala’s poverty eradication and women’s empowerment mission, has been significant in mobilising women for the unskilled labour opportunities that MGNREGS offers, and ultimately changing old attitudes. The complementarity between Kudumbashree’s self-help groups and the jobs programme has spawned economic and social opportunities that women have been quick to grasp.

The role of community-based organisations and self-help groups formed under Kudumbashree in enabling MGNREGS is well-recognised, as this 2012 Kudumbashree report noted.

Kudumbashree creates ward- and panchayat-level citizens’ groups that work in tandem with local self-governments to reduce poverty and improve governance.

At the ward level, groups play a critical role in registering labourers, preparing annual action plans for MGNREGS, and providing amenities at work sites. An executive decision by the government ensured supervisors for MGNREGS would be chosen from among Kudumbashree groups, and has made Kerala the only state in the country with 100% women supervisors, the report said.

The works identified by Kudumbashree neighbourhood groups are submitted for discussion at village- and ward-level groups. Finally, the Grama Panchayath Committee gives its approval.

In this way, Kudumbashree has paved the way for MGNREGS.

The preponderance of women in MGNREGS, meanwhile, has resulted from the gender wage gap in the state. Men earn more than women in other jobs, whereas MGNREGS pays men and women the same wage. So men have been less interested in MGNREGS, leaving the field wide open to women.

Kerala has the widest gender wage gap for casual wage labour (unskilled non-public work)--at Rs 227 per day, men earned Rs 107.3 per day more than women in 2012, according to this MGNREGS Sameeksha (assessment) report.

Generally, in places with wide gender pay gap, more women participate in MGNREGS as men prefer other higher-paying jobs, the report said. But there are exceptions such as Punjab and Haryana, which may be explained by limited demand for non-public work, which pushes men to avail MGNREGS employment. Other factors could be non-availability of work suitable for women, or cultural reasons such as non-acceptance of women in the labour force, the report added.

The Kudumbashree-MGNREGS link, by providing women with a sustained opportunity for work, has created a steady source of income for them. Currently, the wage rate under MGNREGS in Kerala is Rs 268 per day.

“Women know that they will get equal pay for equal work which is not the case elsewhere,” said ward member Vasanthi. “If it was not for MGNREGS, I would not have stood for elections.”

Since getting employed under MGNREGS, many of her fellow workers have become vocal and confident, she said, adding, “The access to a source of income has strengthened their self-belief.”

Over the years, as more women have registered and shared their experiences, and the government’s mobilisation and awareness campaigns have begun to have an impact, the numbers have increased, MGNREGS worker Kuttan said.

Many women workers get offered casual work by other employers due to their MGNREGS experience. Kuttan said she saved money for her daughter’s wedding and bought jewellery from her MGNREGS savings.

There has been a four-percentage-point decrease in women’s participation in 2016-17, which an official--speaking on condition of anonymity--said was because more “scientific” methods were being used to assess workers’ performance, which may have discouraged the elderly and some other workers from taking up MGNREGS work. 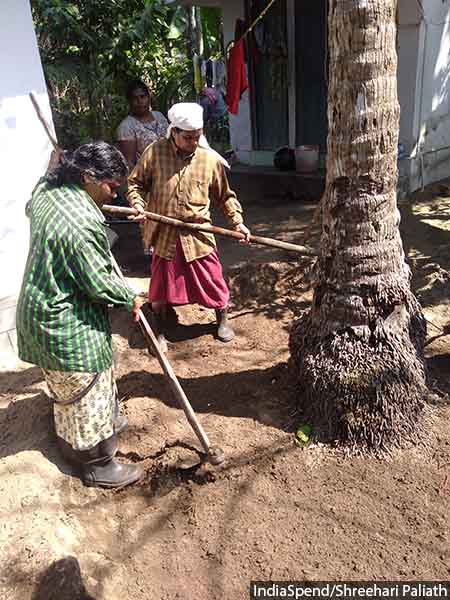 Devayani Kuttan (left), 52, says times have changed since she began working under MGNREGS in 2008. Over the years, the wages have helped her finance her daughter’s wedding and buy jewellery, traditionally considered a moveable asset.

Often, workers deposit Rs 30-50 a week into the thrift fund set up by their local Kudumbashree unit. The small regular savings of neighborhood groups are pooled and given out as internal loans to the most deserving in the group, according to the Kudumbashree website. These loans are useful if members face immediate financial shocks. Members’ MGNREGS wages have enlarged this pool.

MGNREGS work has also strengthened bonds between workers, enabling elderly women to work, too. “The employment programme gives me a source of income. Who else will employ me at my age?” said 65-year-old Devaki, one such beneficiary in Thalikulam village, who only shared her first name.

At 13%, Kerala has the highest proportion of over-60 people in the country, IndiaSpend reported on October 7, 2017. When the work gets cumbersome, the younger workers lend a hand, Vasanthi said, adding, “Our interactions change our social attitude towards the elderly, and allow us to realise the work that goes into maintaining a community.”