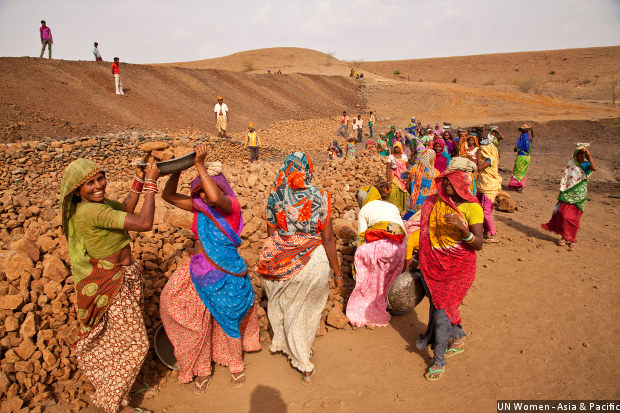 With a 14% rise in funding for the Mahatma Gandhi National Rural Employment Guarantee Act (MNREGA) in Budget 2016-17, the world's largest state-run jobs plan continues to be India's top poverty alleviation programme, after a decade of operation.

MNREGA, which guarantees 100 days of work to unskilled labourers in villages of India, will employ at least 52 million people and provide livelihoods to their families. That means about 260 million (considering an average family of five) will depend on it over the next 20 years, according to an IndiaSpend analysis.

The table above shows that NREGA funding has risen 18% over three years. Unlike last year, though, when the programme exhausted its money by December, it is unclear what might happen this year when--which is more likely than if--money runs out.

In 2015-16, there was a buffer of Rs 5,000 crore in case the ministry finished its money, but Delhi released only Rs 2,000 crore of that money, according to Aruna Nikhil Roy of the People's Action for Employment Guarantee, a Delhi-based NGO.

The absolute number of poor as well as the proportion of poor below the poverty line (according to the Tendulkar poverty line) has been declining over two decades, as we reported.

But about 270 million are still below the poverty line, more than the population of Indonesia (255 million), the world's fifth-most populated country. The poverty line is the ability to spend Rs 47 per day per person in urban areas and Rs 32 in rural areas.

260 million will depend on MGNREGA over two decades

MGNREGA is being lauded for its achievements in the past decade. There are 277.9 million registered workers under the scheme, and 98.3 million of them are active workers.

The programme covers all adults from rural households who seek employment.

The “work” under MGNREGA covers “unskilled manual labour”, providing an opportunity to every person who needs employment.

Without skills, young Indians in rural areas will need MNREGA

To calculate how many Indians will need employment in the coming years, IndiaSpend looked at the illiterate rural population, according to the 2011 census. There are 51.7 million illiterate people aged 16 to 30.

Since they will not benefit from the Right to Education, which guarantees free and compulsory elementary education till age 14, this population will not be a part of India's skilled labour force.

“Skills”, according to this International Labour Organisation definition, require at least five years of schooling. So, for at least 20 years, MGNREGA will likely need to support this group of Indians.

A word of caution: This 52 million (rounded off) population includes only illiterates from the Census 2011 data. There are many among the literate population who have basic reading and writing skills but are not skilled enough to work in industry.

MGNREGA critics contend that the scheme does not help pare poverty because of corruption and poor implementation. “From a policy point of view, we should be interested in the efficiency of transferring incomes to the poor,” Surjit Bhalla wrote in the Indian Express recently.

With no cost-benefit assessment of MGNREGA work and no technical support, the programme struggles to create assets or infrastructure in rural areas, which it should, Indian Institute of Technology (Delhi) economics professor Reetika Khera, wrote in a recent Indian Express column.

MNREGA is short of funds; 17% of its budget went into paying wages and materials from the previous financial year, according to a letter from Ministry of Rural Development to the Ministry of Finance. The actual allocation for MNREGA this year is around Rs 29,000 crore ($4.6 billion).

This fund squeeze for MNREGA is not new and has been evident under both the United Progressive Alliance II and the National Democratic Alliance regimes.

Ending the year with pending liabilities, which effectively means workers’ wages are unpaid, has been a consistent trend.

Further, as per the Ministry of Rural Development and Ministry of Finance calculations, state governments require at least an additional Rs. 6,300 crore to pay wages and other expenses.

The drought-affected states of Odisha, Madhya Pradesh, Karnataka, Andhra Pradesh, Telangana and Uttar Pradesh will provide 150 days of employment--against the normal 100--but there is no extra money evident, from Delhi or in their budgets.

Jaitley's budget for MNREGA may not be enough

Under the devolution recommendations of the 14th Finance Commission, India's states have been given more money, and hence more powers, to decide how they want to finance social welfare.

Jaitley said in his speech: “In spite of the consequential reduced fiscal space for the Centre, the Government has decided to continue supporting important national priorities such as agriculture, education, health, MGNREGA, and rural infrastructure including roads.”