New Delhi: The cow trade at a leading cattle fair in Rajasthan, India's second-largest cattle-trading state, fell 95% over six years to 2017, an indication of the decline in cow rearing--once a popular livelihood choice--during the tenure of the Bharatiya Janata Party (BJP).

In 2011, at the state’s biggest animal fair held at Tilwara in Rajasthan’s western district of Barmer, 7,430 cows were traded for Rs 1.35 crore. By 2017, the number of cows at the fair fell to 342, as revenues declined to Rs 7.3 lakh, according to official records made available to IndiaSpend.

Also, despite the BJP's multiple official missions to protect the cow, especially vanishing native breeds, Rajasthan's rare desert variety, the Tharparkar, moved closer to extinction over the five years of the BJP's rule, according to an ongoing Cattle Survey started in 2017.

In arid desert districts absent of industrial activity, cattle rearing has traditionally been a lifeline for Hindus and Muslims. But our investigations across the rural areas of Jaipur, Jodhpur and Barmer showed that cow vigilantism--right-wing lynch mobs attacking people on suspicion of cow slaughter or smuggling--had terrified villagers into abandoning businesses associated with the cow.

“Around 95% villagers from the (Muslim) community in the two bordering districts have abandoned the cow business because of threats from the Hindutva brigade,” said Mohammed Isha Khan of Barmer’s Derasar village. 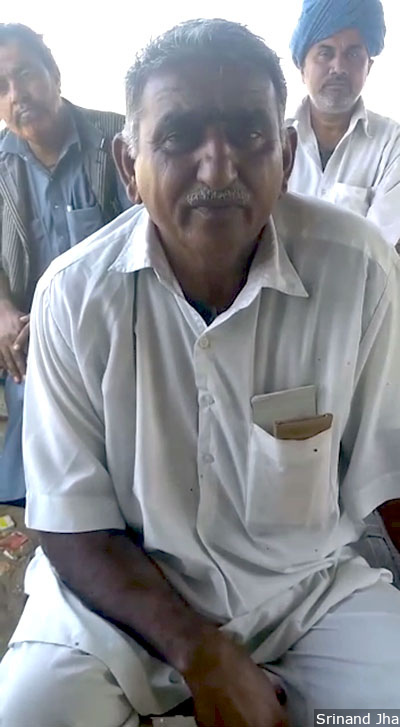 Around 95% villagers from the Muslim community in Rajasthan's Barmer district have abandoned the cow business because of threats from the Hindutva brigade, says Mohammed Isha Khan of Barmer’s Derasar village.

The cow, with a daily milk yield of around 6 litres, has lost its place as India’s primary milk provider to the buffalo, which yields approximately 12 litres. But its market value took a further blow when severe cow protection laws were brought in by BJP governments at the Centre and in states and vigilante attacks became frequent.

Between May 2014 and March 2018, 45 people were killed in cow-related violence across nine states, as per the union home ministry. Rajasthan reported seven such incidents over the same period.

From 2010 to-date, 127 cow-related attacks have been reported across 22 states, according to a FactChecker database that tracks English media reports of such violence. Over 98% of these attacks took place after May 2014, when the BJP came to power at the Centre. Rajasthan has reported 10 such attacks, the database shows--all after 2014.

Farmers who could no longer sell ageing cows to the bovine trade had to either bear the cost of feeding them or surreptitiously turn them loose. These stray cattle have ended up raiding and destroying farms. This is particularly the case in states situated in India’s heartland where the enforcement of cow protection rules has often led to violence--Madhya Pradesh, Uttar Pradesh and Rajasthan.

“Stray cattle have emerged as a major issue in recent years,” Rajasthan’s additional chief secretary (animal husbandry), Pawan Kumar Goyal, told IndiaSpend. “There are 2,727 registered goshalas (cowsheds), which are not financially viable at all. They aren’t admitting any old and infirm cows or calves. These are roaming the streets and fields, harming the crops.”

The number of cows dying on India’s railway tracks increased 112% over three years to 2018, the Indian Express reported in August 2018. There were 2,183 cases reported across India in 2015-16 but the number rose to over 10,105 in 2017-18, a 362% rise. Most of these deaths are from the Hindi heartland, the report said, where cow protection has been a strident issue since the BJP assumed power.

Pramod Jain Bhaya, Rajasthan’s gopalan (cow welfare) minister, admitted that there were several “legacy issues” the Congress government was dealing with. “On March 2, 2019, the state government had convened a conference with cowshed owners at Jaipur,” he said. “Based on their suggestions, we will frame a policy.” Rajasthan was the first state to set up a ministry for cow welfare which has now become an administrative department.

Muslim villagers in Rajasthan’s bordering districts have, for generations, been engaged in the cattle-rearing business. Most of them are out of work now.

“Muslim families have traditionally looked after the cows with greater devotion in these areas,” said Bhuvnesh Jain, convenor of Thar Jagruk Nagrik Manch, an organisation working for the conservation of the Tharparkar breed. “They do not eat beef. But the activities of Hindu radical groups in the last five years have changed the socio-economic profile of these areas. Muslims have been abandoning the cow business to migrate to other livelihood options.”

At Sanchore in Jalore district, three incidents of cow-related violence have been reported in the last two years. Local units of the Bajrang Dal, a right-wing group, are determined not to let local Muslims return to any kind of cattle business.

“They may not be beef eaters but some of them are cow smugglers,” alleged Sant Sarvandas of the Bajrang Dal unit in Sanchore. “We have set up units with approximately 15 volunteers in each of the bordering districts to keep a watch. We will not allow them (Muslims) to have anything to do with the cow business.”

Bajrang Dal’s strategy appears to have worked. “There is no money to be made from the sale/purchase of bulls; no state protection from the Hindutva gangs,” said Mulaqat Ali, a farmer from Derasar village. “We have no alternative but to abandon the cow business.”

Dal activists are not even sparing Muslims who run cow shelters, villagers complained. “At Bhujawad village on the Jodhpur-Barmer Road, our organisation--the Marwar Muslim Education and Welfare Society--had been running a cowshed for the last 10 years,” said Shokat Ansari, the organisation’s patron. “But I had to close the business last month as hundreds of Bajrang Dal activists had started to arrive on motorcycles, issuing death threats.”

Hakam Khan of Bandasar in Barmer recounted a similar story. “Bajrang Dal volunteers have been on a rampage in recent years, preventing the sale/purchase of the male bull,” he said. “The Muslims of Rajasthan are not beef eaters but the community was still targetted. We have migrated to other business activities in order to escape the anger of these groups.”

In Rajasthan, the BJP government’s rhetoric on cow protection was not matched by its actions. No more than Rs 9.84 crore of the Rs 123.43 crore sanctioned for cow welfare schemes, or 8% of the amount allocated, was spent, as per this 2016-17 report of the state cow welfare ministry.

“During the year, it is likely that the department asked for more funds in the revised budget,” said Nesar Ahmed of the Jaipur-based Budget Analysis Research Centre, a Jaipur-based think tank.

Under a scheme for the rehabilitation of sick cows, no allocations were made in 2014-15. For the next two years, Rs 2.06 crore of the Rs 7.88-crore budget was spent, approximately a third of the sanctioned sum. In a memorandum to new gopalan minister Pramod Jain Bhaya, the Rajasthan Go Gram Sewa Sangha--an alliance of 2,000 cowsheds--flagged two major issues:

Former chief minister Vasundhara Raje had announced plans to set up two cow sanctuaries over a 1,000-hectare plot each in Bikaner and Bharatpur districts but neither came to fruition. She also promised to develop Bikaner into a “cheese hub” and Bhilwara into a “chocolate hub” to help improve the dairy business but the plans never took off.

In December 2014, the Narendra Modi government announced a Rs 150-crore scheme for the preservation of native cow breeds. Although the Tharparkar and other desert cow breeds such as the Nagori, Rathi and Gir have been declining in numbers, the scheme was only partially implemented in Rajasthan. In its first year (2014-15), the Centre allocated Rs 3 crore for the state, but no funds were released.

“These plans have not been translated into actionable programmes because the BJP has only been interested in using the cow as a political tool,” said Poonam Bhandari, former member of the Rajasthan Go Sewa Aayog (cow welfare authority), later renamed gopalan ministry by the BJP government.

“Several cow welfare schemes were left in the lurch when the BJP was voted out of power in last year’s assembly elections,” said Otaram Dewasi, Rajasthan’s former cow minister. He lost to an independent by 10,000 votes in the 2018 assembly election.

The decline of the Tharparkar

This sturdy breed draws its name from the Tharparkar district of Pakistan bordering Rajasthan. As we said earlier, it is prized for its ability to withstand the desert heat and resistance to disease. While other indigenous breeds, such as the Nagori, yield an average 5 litres of milk each day, the Tharparkar produces 8 litres, according to Bhuvnesh Jain.

There were around 2,301 “exotic” cow breeds in Barmer and 1,637 in Jaisalmer--mostly Tharparkars--as per the 2012 Cattle Census. These numbers are likely to plunge further in the 2017 census, highly placed sources in the Rajasthan government told IndiaSpend on condition of anonymity.

“Native breeds such as the Tharparkar are close to extinction,” said Khajan Singh, director of the Rajasthan government’s gopalan department.

There are multiple reasons for the Tharparkar’s decline. “Climatic change, alterations in cropping pattern (causing fodder shortage), the introduction of mechanised farming techniques such as the use of tractors and the gradual encroachment of oran and gochar lands (common grazing lands) have contributed to the gradual decline in the Tharparkar numbers,” said Lata Kachawa of the Society for Rural Upliftment (SURE), a Barmer-based voluntary organisation. “But the biggest obstacle to the survival of the Tharparkar breed in recent years has come from the cow vigilante groups.”

During late 1990s, two male Tharparkars would fetch as much as Rs 30,000 at animal fairs. “But there are no takers these days,” said Dalbir Singh of the Jaipur-based Vikas Adhyayan Sansthan, a voluntary organisation dealing in livestock research.

(Jha is an independent journalist based in New Delhi.)