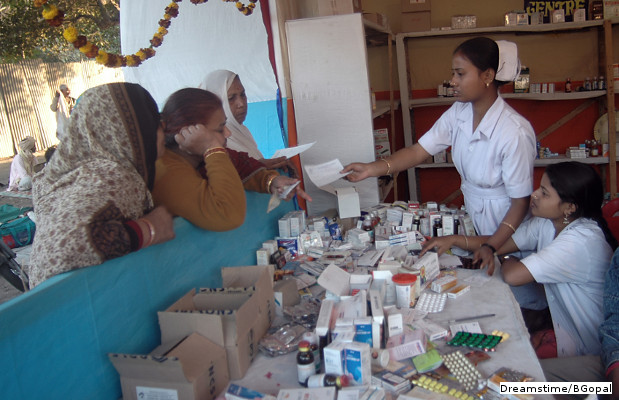 Every indicator is grim. About 90% of treatments for childhood diarrhoea and pneumonia–the leading causes of death among Indian children–are wrong and 56 out of every 1,000 kids under the age of five died in 2012.

Yet, that may not be so obvious either.

Many studies have pointed to the fact that health outcomes are not necessarily related to increased spending, leading to this comment in The Hindu that the 2015 Draft National Health Policy was putting a “band-aid on a corpse”.

This study, for instance, noted that seven of 17 states could do better, not by spending more money, but by being more efficient.

Poorer Bangladesh and Haiti spend more of its GDP than India with 3.6% and 6.4%, respectively.

But in many poor, large Indian states, medical-personnel shortages are rife and vast areas have no healthcare on offer, so while efficiency of spending must improve, in these cases, more spending is important.

The Bharatiya Janata Party-led government, set to announce its first full-fledged budget on February 28, promised in its manifesto to increase spending on health to 3% of GDP.

Let us look at the budget outlay for the Department of Health and Family Welfare over the past three years.

Health outcomes across the country have improved over the past few years. The infant mortality rate (IMR) and maternal mortality ratio (MMR) have fallen. However, there are wide disparities between states.

Assam and Madhya Pradesh had the highest IMR at 54 deaths per 1,000 live births, the same as Liberia and Ghana.

One of the main reasons for the disparity in outcomes is the unequal distribution of healthcare infrastructure.

As many as 8,760 PHCs (nearly 36.4% of 24,448 PHCs nationwide) now offer 24x7 services across the country, according to the Ministry of Health and Family Welfare. However, there is a shortage of these health centres with a 24% shortfall in the number of PHCs across India and 33% in the number of CHCs.

Let us now look at the availability of doctors at these centres across India.

Uttarakhand, Uttar Pradesh and Madhya Pradesh are short of doctors by 51% and 40%, respectively. The vacancy at CHCs is even steeper in these states at 77%, 75% and 73%, respectively.

Infrastructure spending, which meets expenses for construction of PHCs/CHCs and salaries for doctors, nurses as well as medical staff, has actually declined over the past two years from 23% of the budget to 15% in 2014-15.

So, the challenges would be to increase spending on health infrastructure, reduce the gap between rural and urban areas when it comes to health outcomes, focus on curbing the spread of communicable diseases and, above all, show greater efficiency in health spending. We will wait for some answers on February 28.