Harvesting The Rain: How One Kerala District Is Solving Its Water Problem

Well water availability has been falling across India, and in Kerala, it fell by 10 percentage points to 62% in the decade ending 2011. In 2008, the district administration of Thrissur initiated Mazhapolima, a scheme to recharge wells through rooftop rainwater harvesting. Over a decade, the scheme has benefitted more than 100,000 people and its success has prompted the state government to extend it to all districts.

Thrissur: Jawab Valiyadath folded his blue lungi (sarong) around his waist and rolled up his sleeve as he reached to open a plastic tap near the sheet-metal fence that surrounds his house. The plastic pipe that stretched from his terrace to the fence rumbled. “It has been a tough year. Around here, wells dried up or water turned yellow and saline due to scanty rainfall,” Valiyadath recalled. “Recharging my well during the rains helped save water for our daily needs,” he said as water gushed out onto the dry sandy soil.

A construction worker, 45-year-old Valiyadath, his wife Zeenath, and their three teenage boys live in the coastal Padiyur panchayat of Kerala’s Thrissur district. They have benefited from the district administration’s Mazhapolima scheme, through which villagers were provided a 75% subsidy to install rooftop rainwater harvesting systems (worth Rs 4,500). Since 2008, close to 30,000 units have been installed, benefitting 100,000 people. Officials estimate that many more people have installed units on their own, although data are not available.

As per a February 2013 impact assessment report, about 78% of respondents in the coastal and midland area reported a “significant improvement in the groundwater availability”.

Cycles of plenty and scarcity

Every year, from February until the monsoon arrives in June, Thrissur faces water scarcity. Proximity to the sea causes salt water ingress, limiting the depth to which families like the Valiyadaths can dig borewells for water. Shallower, open dug wells have therefore been an important source of water traditionally.

However, poor maintenance has put many wells into disuse while rainfall has been getting increasingly erratic. These factors, along with the loss of traditional waterways, drainage systems, wells and ponds, have led to scarcity of water in the dry season.

The state now faces an extended dry season from February until the end of May. In the decade ending 2011, household well-water availability in Kerala fell by 10 percentage points to 62%.

This mirrors the situation in the rest of the country--average well-water levels in January 2016 were lower than the average between 2006 and 2015 across India, IndiaSpend reported in November 2016. Only 35% of wells showed any rise in water level, while 64% showed a decline.

As per the United Nations, an area with an annual per capita availability of less than 1,700 cubic metres (m3) of water is considered ‘water-stressed’; less than 1,000 m3, ‘water scarce’.

In 2011, per capita water availability in India was estimated to be 1,545 m3, making it water stressed, IndiaSpend reported in December 2017 based on an assessment by the water ministry. Availability was expected to decline further to 1,341 m3 by 2025 and to 1,140 m3 in 2050, which would make the country severely water-stressed.

In Thrissur, 450,000 wells served the three-fourths of its three million population who were dependent on well water, which averages to four people per well. Yet, families such as Valiyadath’s faced water scarcity for months every year.

The Thrissur district administration, under the stewardship of the then Collector V.K. Baby, decided to initiate Mazhapolima (Bounty of Rain), a water harvesting programme, in 2008. The idea was to artificially recharge groundwater by harvesting rooftop rainwater directly into dugwells.

Traditionally used to access groundwater, dug wells have rapidly fallen into disuse. In a little over two decades to 2014, the number of dugwells reduced by 9%, from 9.6 million to 8.7 million across 661 districts of India, according to the 5th Minor Irrigation Census.

As one of the southern-most states in mainland India, Kerala is among the first to receive the monsoon (southwest) rains. The state is estimated to receive nearly 3,000 millimetres (mm) of rainfall annually. By comparison, Gujarat’s Kachchh district, among the driest regions of the country, receives 378.2 mm, 1/10th of Kerala’s despite being geographically larger.

Yet, Kerala was declared drought-hit in April 2017. It received only 33% of normal rainfall from June to December the previous year, as Scroll.in reported in April 2017. Between 1951 and 2010, the annual and monsoonal rainfall decreased on average by 1.43 mm and 2.42 mm per year, respectively, according to this report by the Indian Meteorological Department.

Groundwater had been the prime source of water to meet the domestic needs of more than 80% of rural and 50% of urban population, according to the Environment Information Centre. Water scarcity due to inefficient water management, particularly poor maintenance of dug wells, has affected vast numbers among Kerala’s 33 million population.

“Ever since government programmes ensured piped water supply in the 1970s, people have forgotten to protect wells in homesteads,” Jos C. Raphael, Secretary of the Mazhapolima scheme, told IndiaSpend, “Piped supply has reduced drudgery, but the loss of traditional waterways, drainage systems, wells and ponds, and erratic rainfall have led to a serious water scarcity problem in Kerala.”

Raphael and his team have been instrumental in engaging the community to take up recharge of wells through rainwater harvesting in Thrissur.

How Thrissur got it right

Mazhapolima has been implemented all across Thrissur district, including its highlands, midlands and coastal parts. Nearly 35% of the units have been installed in homes located in coastal regions and 32% each in lowlands and highlands. The remaining one percent have been installed in institutions like police stations, government schools and panchayats.

Rainwater harvesting units are of two types: One with a filter made of sand, charcoal and pebbles; and the other with a nylon or cloth filter.

In each unit, plastic pipes direct rooftop rainwater through a filter tank, before directing it to open wells. The initial gush of water is let out to avoid any contaminants or dirt from mixing with the well water. This water percolates into the soil too, and is not wasted.

One unit is estimated to cost Rs 4,500, of which the government pays 75% and the beneficiary pays the rest (Rs 1,125). Funds from ongoing government programmes such as the Integrated Watershed Management Programme, the Mahatma Gandhi Rural Employment Guarantee Act (MGNREGA) and the district disaster management fund have been deployed. The Kerala State Industrial Development Corporation and private donors have also contributed.

In 2012, the Vellangallur block in Thrissur decided to pilot a cluster approach. Since numerous panchayats fall under the larger block, it decided to set up a lottery system, and Padiyur village was chosen from the lot. The panchayat utilised Rs 1 lakh from its ‘plan fund’--decided by the panchayat at the beginning of the year--to install units in 38 homes, one of which belonged to Valiyadath.

When the Valiyadath family moved to Thrissur in 2008, the water crisis was severe. “I used to walk several kilometres carrying pots to fill water at a public stand-post or the well near it. We needed at least five pots a day,” Zeenath Valiyadath said. An average pot of the kind Zeenath talked about carries 15 litres. The 12th Five Year Plan aimed to provide at least 55 litres per person per day in rural areas. 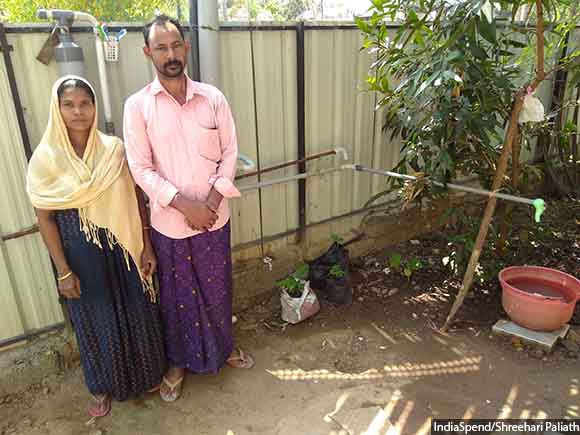 Jawab and Zeenath Valiyadath are among the beneficiaries of Mazhapolima, a district administration scheme that provides subsidies on rainwater harvesting kits for recharging dug wells. Zeenath no longer has to travel long distances to fetch water.

A borewell that Valiyadath installed in his house after the drought of 2017 struck water at 30 feet. “Beyond that fresh water will mix with saline water,” he explained, adding that the water recharging activity has made the groundwater more suitable for domestic use.

Not too far from the Valiyadath household, V.V. Laila, 61, lives alone. “After my mother passed, I, being the eldest, looked after my siblings. I remember carrying my younger sister and a pot of water from the well at the same time,” she said. “I’ve had to go through a lot to source water in the past.”

Living alone, her need for water is minimal and she does not have a piped water connection. “I use water from the well here for non-drinking water requirements. For drinking needs, I use the well close by,” she said. 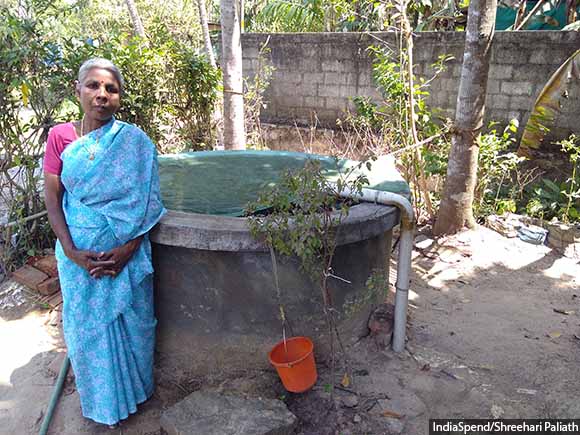 V.V. Laila, 61, lives alone. Although water in her well turns turbid during the dry season, the Mazhapolima scheme has ensured that the well does not dry up. She uses this water for non-drinking purposes during the summer.

The well-water is yellowish, which shows the presence of iron. “Before the rain, I ensure that I clean the well. I place the chair on the steps leading to the porch to clean,” she said, adding that during the rains, the well water clears up.

As per this February 2013 impact assessment report, about 78% of respondents in the coastal and midland area, as we said, reported a “significant improvement in the groundwater availability”. The results have been less visible in the highlands, where 68% of respondents said the difference was “minimal”, a result the report blamed on the topography of the area. “[D]ue to the moderate to steep slopes and the porous nature of the formation the recharged groundwater may drain very fast to the valley portion. Because of this reason Mazhapolima project has not shown any significant impact on the groundwater regime in the highland area,” it said.

maintenance of the recharge systems, use of quality materials and beneficiary participation.

“Often, in households below the poverty line, the system falls into disuse,” Raphael said. Maintenance of the pipe and addition of the charcoal and sand filter costs around Rs 2,000 every year, and many families can not afford it. However, Raphael said, “If the unit is maintained and cleaned well, a basic permeable filter [with a nylon net or cloth] should work.”

Pipes and filters tend to accumulate dirt and leaves over time, and are not easy to clean. Funds for maintenance are not available from MGNREGA as the work is skilled/semi-skilled; MGNREGA is used only for unskilled work.

Considering that more than 90% of MGNREGA participants are women--as the men tend to find higher paying jobs elsewhere--funds are required for women workers’ capacity building and training before they can take up maintenance-related work. “We are hoping to include it in our panchayat plan for next year,” said Sivadasan C.A., panchayat member in Padiyur village. Nevertheless, the final onus for conserving and maintaining will be the household owners’.

Although the Mazhapolima model has been extended to all districts, its monitoring is at the panchayat level. The data on its impact are anecdotal so far, based on household feedback.

Since 2008, Mazhapolima has been able to install close to 30,000 units, with over 100,000 beneficiaries. Many more people have installed units individually, Raphael estimated, but data are not available.