Mumbai: As many as 50% of teenage Indian girls are underweight, 52% are anaemic, about 39% still defecate in the open and about 46% do not use hygienic methods of menstrual protection.

These are the findings of a new survey report, the Teen Age Girls report (or the TAG report), released by Nanhi Kali, a project by the Naandi Foundation, which works with adolescent girls.

This concluding part looks at the status of health and access to sanitation, at a time when 63.2 million teenage Indian girls are set to be first-time voters in 2019. The health of the teenage girl holds significance not only for her own life, but also for the health and well-being of the children she may have.

The survey covered 74,000 teenage girls from 28 states and seven cities, and asked them questions on nine topics including educational and health status, basic life skills, agency and empowerment within and outside the home and aspirations.

As many as 51.8% of teenage Indian girls are anaemic, the survey found.

Anaemia is a condition in which a person has a lower-than-normal number of red blood cells or quantity of haemoglobin, which reduces the capacity of their blood to carry oxygen and can lead to a number of health problems, and even death.

Low haemoglobin levels lower productivity and cause illness and death, and thus impose an economic cost. The loss of gross domestic product to anaemia was estimated at $22.64 billion (Rs 1.50 lakh crore) in 2016, more than three times the health budget for 2017-18, as IndiaSpend reported in November 2017.

Teenage girls in urban areas were more likely to have normal haemoglobin levels compared to rural areas, the survey found. 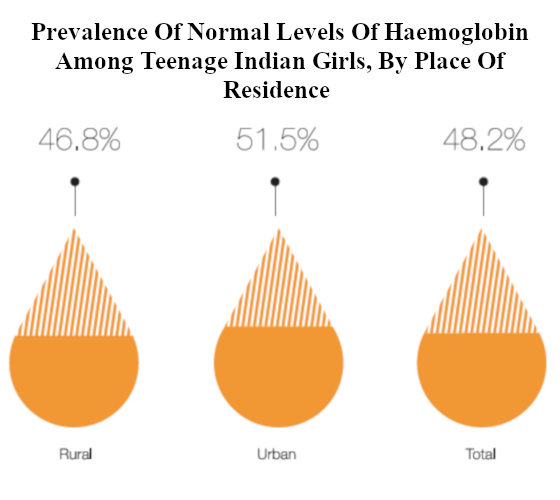 Similarly, girls in households with higher household wealth were more likely to have normal haemoglobin levels.

Households are divided into wealth quintiles--five equal parts based on their scores on ownership of consumer goods and household characteristics, such as availability of basic facilities such as clean drinking water. 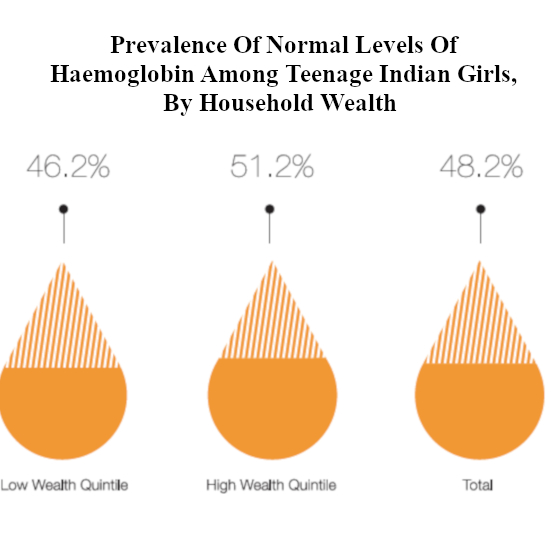 As many as 50.2% of teenage Indian girls are underweight, the survey found using Body Mass Index (BMI)--which categorises people on the basis of weight-to-height ratio into underweight, normal, overweight and obese. 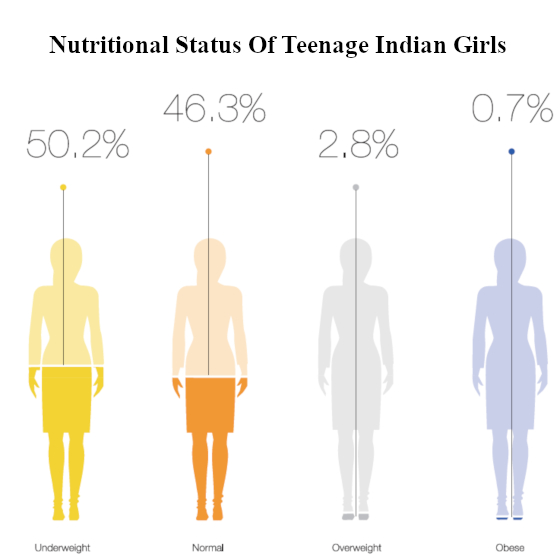 Much of this stems from undernutrition in their childhood.

Around two-thirds of the working population in India are earning 13% less because of stunting in childhood--being excessively short for their age--one of the world’s highest such reductions in per capita income, IndiaSpend reported on August 15, 2018. Impaired brain development, which leads to lower cognitive and socio-emotional skills and lower levels of educational attainment have led to 66% of the workforce earning less than it would otherwise have. 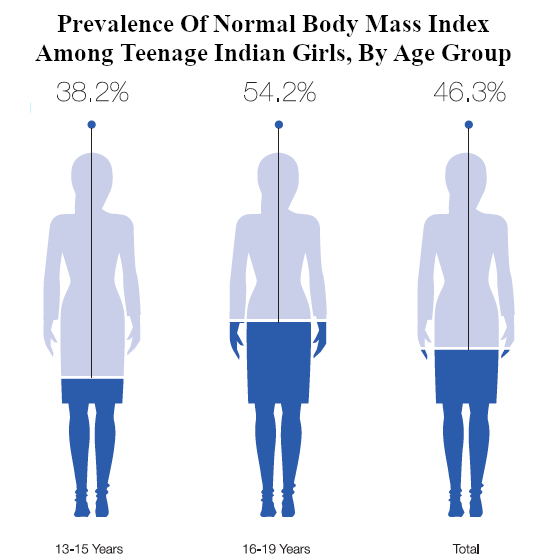 Similarly, girls in urban areas were more likely to have normal BMI levels compared to their rural counterparts. 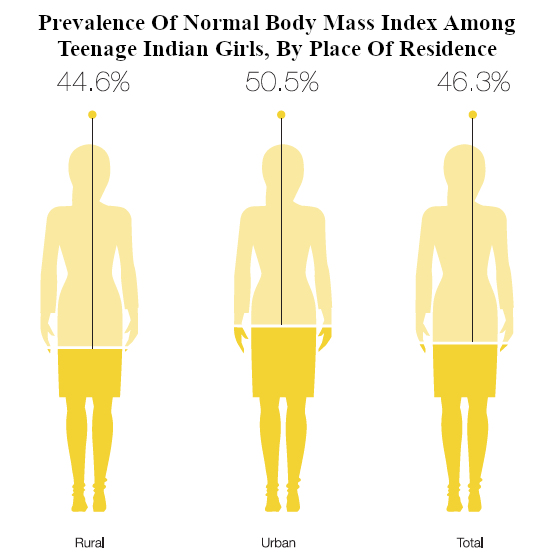 While 49.9% girls in high wealth quintile households had normal BMI, 43.9% in ow BMI households did. 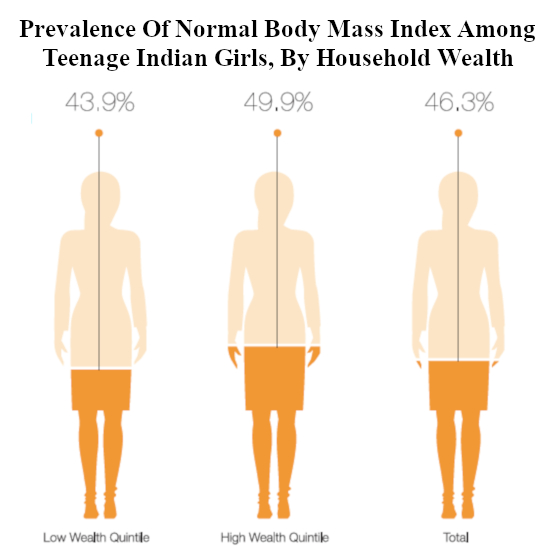 “A key underlying driver (of malnutrition)... is the condition of girls and women--their own nutrition and health, their social status that determines their age at marriage, their educational status, their economic empowerment and so much more,” Purnima Menon, senior research fellow at the International Food Policy Research Institute, a think tank, had told IndiaSpend in this September 2017 interview. “In India and in South Asia, gender discrimination is one of the most significant underlying factors for poor nutrition.”

“The causative factors for low BMI and anaemia cutting across socio-economic classes for teenage girls include the nature of status of the woman within the family, prevalence of superstitions and lack of awareness on what constitutes as good health,” Rohini Mukherjee, chief policy officer at Naandi Foundation, told IndiaSpend.

Further, seven in 10 girls aged 15-19 years said they had at least one problem in accessing healthcare. Problems cited ranged from getting permission for treatment to unavailability of medical providers and drugs.

Four in 10 teenage Indian girls still defecate in the open

While 49% girls in rural areas said they defecate in the open, 18% of their urban counterparts said so.

Girls with higher household wealth were less likely to defecate in the open, data show.

“In spite of there being toilets, many girls prefer going out, because of a combination of two major reasons,” Mukherjee explained. “One is that most of the toilets lack a water connection, which means that the girls have to carry water, thus discouraging them to use the toilets.”

As many as 57.5% toilets constructed under Swachh Bharat Abhiyaan do not have a water connection, according to the 2016 Swachhta Status Report by the National Sample Survey Office

Other is that traditionally, having an attached toilet and bathroom has not been a practice and thus defecating being a private act, the girls feel shy to use the toilet. “Use of toilets, we all agree, must be easy and comfortable, but when it comes along with a whole lot of a hard work, they prefer older practices,” said Mukherjee.

Inadequate sanitation--management of human excreta, solid waste, and drainage--costs India Rs 2.4 trillion ($53.8 billion) every year in losses due health, damage to drinking water and tourism costs, as IndiaSpend reported in January 2018. Inadequate sanitation is one of the major causes for incidences of diarrhoea, under-five mortality and stunting among children and as for adults, improved sanitation practices will help them be more productive, ensuring more food and income for the family.

Only 54.4% of teenage Indian girls use hygienic menstrual protection, the survey found. Sanitary napkins, tampons and menstrual cups are classified as ‘hygienic protection’, while unhygienic practices include use of cloth, cloth pads and other local material.

As many as 45.5% girls said they used cloth or cloth pads.

The use of hygienic menstrual protection was more likely among girls in urban areas, the survey found. 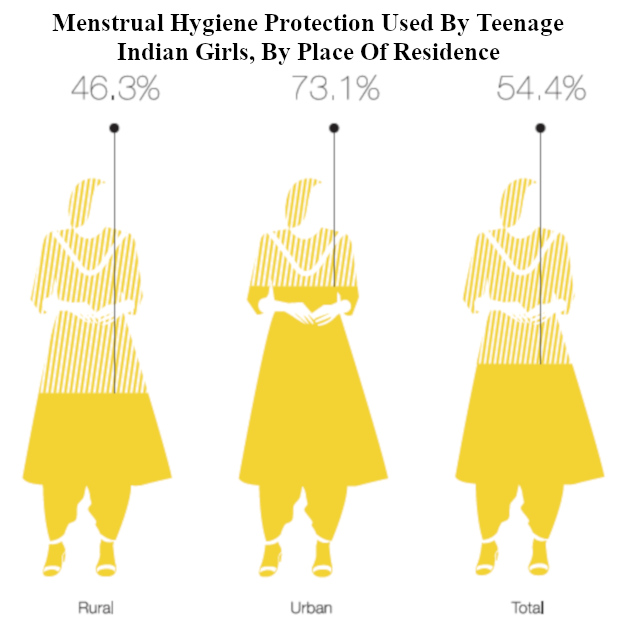 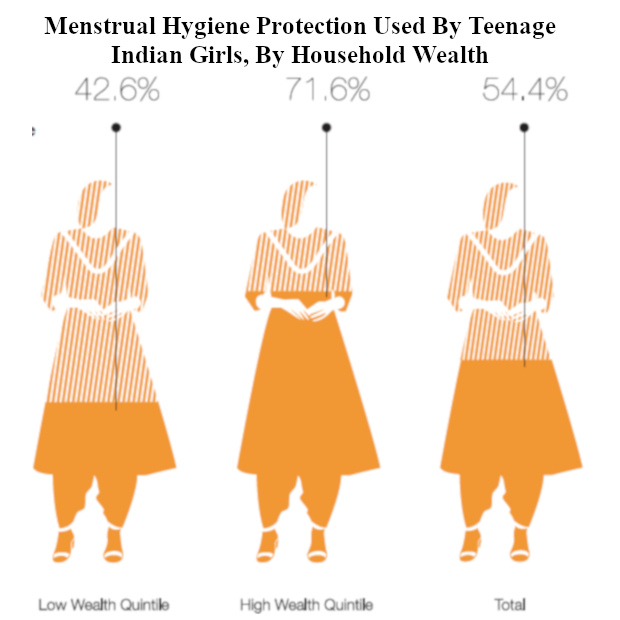 “There is an understanding on what are improved methods of menstrual protection even though they may not call it that way, and all the girls certainly aspire to use a branded pad,” said Mukherjee.

Even though the pads have reached the remotest markets, affordability remains a major issue, Mukherjee told IndiaSpend.

As many as 70% mothers still consider talking about menstruation a ‘dirty’ subject, as IndiaSpend reported in July 2018.

(Kulkarni, a post-graduate in social work, is an intern with IndiaSpend.)