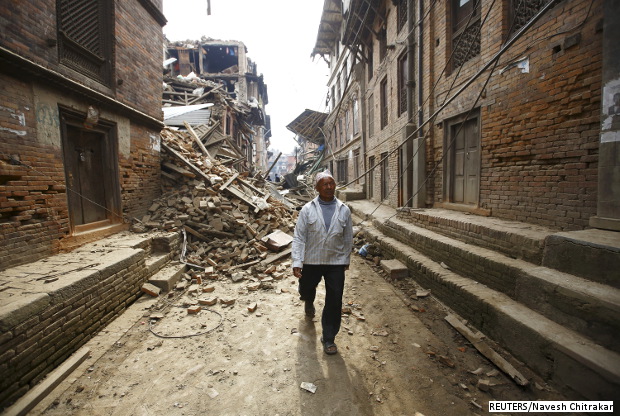 A man walks past houses in Bhaktapur, Nepal that were damaged in Saturday's earthquake.

Guwahati and Srinagar are the two Indian cities at highest risk of being devastated by an earthquake, with 36 other cities in areas prone to earthquakes, according to government data.

Guwahati and Srinagar fall in what is called “very severe intensity zone”, or zone V, the highest-risk earthquake zone.

“India has highly populous cities, including the national capital of New Delhi, located in zones of high seismic risk,” said the report. “Typically, the majority of the constructions in these cities are not earthquake resistant. Thus any earthquake striking in one of these cities would turn into a major disaster.”

A reminder of India’s vulnerability

The Nepal earthquake, which has now claimed more than 3,000 lives, and the NDM data are a reminder of India’s vulnerability.

IndiaSpend recently reported that nearly 60% of the sub-continental landmass is vulnerable to earthquakes.

About 50 million years ago, India—then an island that had previously broken off from a supercontinent called Gondwana, a name still used for what is now Chhattisgarh—slammed into the Eurasian mainland, creating the Himalayas as it collided.

All land on earth rides on “plates”, which glide on the mantle, a rocky inner layer. The Indian plate continues to grind into the Eurasian plate, and as it does, the Himalayas and north India are on shaky ground.

India pushes northeast into Asia at roughly 5 cm every year, causing subterranean stresses that are released in the form of earthquakes every now and then.

Vulnerable zones are monitored, but prediction is impossible

An array of sensors in India and abroad monitor plate activity, but it is impossible to predict an earthquake, as many tweets and Whatsapp messages after the Nepal temblor appeared to indicate:

The five ridiculous rumors circulated on social media and WhatsApp after the #NepalEarthquake http://t.co/oHRSYPYNJ3 pic.twitter.com/YIN1ZWO9cW

What is available is data on areas of specific vulnerability.

Gujarat and Uttar Pradesh appear to be the most vulnerable states, with six cities each in earthquake- prone zones. Both the states have one city each under zone IV and five cities marked under zone III. Maharashtra is next with four cities in zone III.

The Bureau of Indian Standards [IS-1893 – part – 1: 2002], based on scientific inputs from a number of agencies, including earthquake data supplied by Indian Meteorological Department (IMD), has grouped India into four seismic zones, II, III, IV and V.

The Modified Mercalli (MM) intensity scale, which measures the impact of earthquakes on the surface of the earth, is broadly associated with India’s earthquake zones, as follows:

Here is a look at some of the major earthquakes that have struck India since the 19th century:

China, United States, Indonesia, Philippines and India were among the five countries world-wide most frequently hit by natural disasters over the last decade, according to this report from the Center for Research on Epidemiology of Disasters.

No country without risk of being hit by natural disasters. #earthquakes biggest killer in Asia http://t.co/GRu68HeHpg pic.twitter.com/oKdi3UeZuq