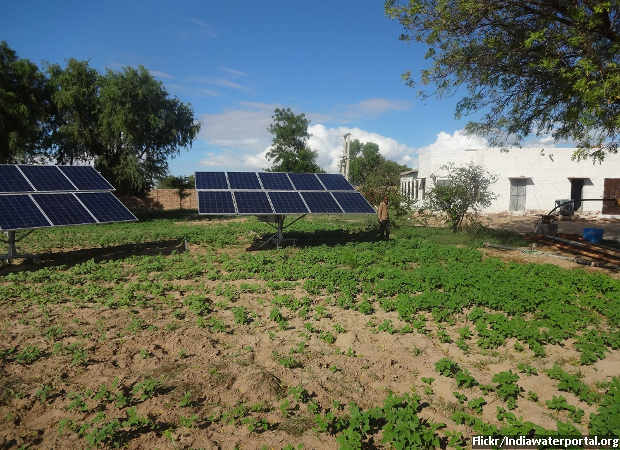 Dhundi, Kheda district, Gujarat: Phodabhai Parmar, a 72-year-old farmer, sits on a charpai sipping tea as solar panels gleam in the fields behind him. Parmar is one of six farmers who have formed the world’s first solar irrigation cooperative in Dhundi village in Gujarat’s Kheda district, about 90 km from Ahmedabad.

The Solar Pump Irrigators' Cooperative Enterprise (SPICE), which began operating in May 2016, not only made a switch from diesel to solar pumps but also adopted net metering--selling excess power to the local electricity utility.

Members now have an incentive to save power and curtail their groundwater use, as any leftover power is sold to the the Madhya Gujarat Vij Company Limited (MGVCL), the local power utility, thereby creating a parallel revenue stream.

India is the largest user of groundwater in the world. By 2012, it uses an estimated 230 cubic kilometers of groundwater per year - over a quarter of the global total. More than 60% of irrigated agriculture in India is dependent on groundwater and if current trends continue, in 20 years about 60% of all India’s aquifers will be in a critical condition, the World Bank said in this 2012 report.

SPICE signed a 25-year power purchase agreement to sell power to MGVCL at the rate of Rs 4.63/kWh (kilowatt-hour, a unit of energy). With six solar pumps and a total capacity of 56.4 kWp (kilowatt peak, which stands for peak power and is the output achieved by a solar module under full solar radiation), the irrigation systems in Dhundi are expected to generate 85,000 kWh/year of solar energy, according to this paper published by IWMI-Tata Water Policy Program, which initiated and partly funded SPICE.

“The selling of power to the grid attaches an opportunity cost to the power that is being generated by the solar pumps, which otherwise would be free power,” Neha Durga, a consultant with IWMI-Tata Water Policy Program, told IndiaSpend. “So even if farmers use the pumps for 100 days of the year for irrigation, for the other 200 days the grid is getting green power. At the same time the farmers now have an incentive to economise on their energy as well as water use.”

“A solar pump is viewed in Dhundi not only as an irrigation asset but also an income-generating asset that has potential to deliver 'climate-proof', risk-free income stream,” the paper stated.

The IWMI-Tata Water Policy Program is a partnership between the International Water Management Institute, a not-for-profit research organisation based in Colombo, Sri Lanka, and the Mumbai-based Sir Ratan Tata Trust, a philanthropic organisation.

In 2015, 9 million diesel pumps--expensive and big greenhouse gas emitters--were being used for irrigation, largely due to lack of electricity connections or poor power supply.

Yet, the upfront cost of a solar pump, about 10 times that of a conventional pump, discourages buyers. Capital subsidy and financing support are a must to promote adoption of solar pumps, a 2014 analysis by Shakti Sustainable Energy Foundation, a not-for-profit based in New Delhi, said.

Guided by this logic, the Ministry of New and Renewable Energy (MNRE) has been running a programme to install solar water pumping systems for irrigation and drinking water across India since 1992, providing subsidy of up to 90% of the upfront capital cost. Various state governments also offer subsidies to varying extents--in Rajasthan, farmers pay only 14% of the total cost of solar pumps, while in Maharashtra, farmers pay only 5%.

At the same time, many states subsidise agricultural electricity connections and consumption, making solar-powered irrigation systems even more uneconomical in comparison, as this 2016 CEEW paper shows.

However, solar pumps pay for themselves over the years by providing cheap and uninterrupted power, while costing little by way of maintenance. Diesel pumps, in contrast, cost anywhere between Rs 20,000 and 25,000 a year for fuel and maintenance.

The SPICE experience is instructive. Farmers who joined initially contributed Rs 5,000/kWp towards the capital cost of solar pumps. The balance Rs 59,000/kWp was subsidised by a research grant from IWMI.

The total project, which consisted of six solar pumps and infrastructure like grid lines and electricity poles, cost Rs 50 lakh for 56.4 kW capacity, Durga said. Rs 15 lakh was spent on constructing the grid and the rest was the cost of solar pumps. “However, four new farmers who joined the collective later paid Rs 25,000/kWp, which is four times more than the initial participants, because they saw the benefits,” Durga said.

By October 2016, 92,305 solar pumps had been installed throughout the country--31,472 during 2015-16 alone, more than the total installed during the past 25 years (since the beginning of the programme), according to the MNRE.

Based on the Dhundi solar experience, IWMI-TATA suggests that state governments scale down capital cost subsidy on solar pumps to around Rs 50,000/kWp from the average Rs 90,000 offered in 2016, and use the savings to offer farmers the opportunity to sell power to the grid at a feed-in tariff of Rs 7.0-7.5/kWh. Farmers would get solar pumps by foregoing power use from the grid, and would instead get a power purchase guarantee for selling power to the utility.

Durga points out that subsidised solar pumps provided under the government’s scheme encourage overuse of groundwater, just like free power to farmers has done for decades in many parts of the country.

“There is no rationing mechanism for water withdrawal. In grid-connected pumps, you can still switch off the line, and control the number of electricity connections being issued to farmers per year, but with solar pumps you cannot do that. It is a 25-year free source of power,” Durga said.

The Ministry of Water Resources had recommend in the National Water Policy 2012 that the use of electricity for groundwater extraction be regulated. “Separate electric feeders for pumping groundwater for agricultural use should be considered,” the policy said. The SPICE model fits in well with this aim.

(Patil is an analyst with IndiaSpend. Video produced by Video Volunteers, a global initiative that empowers disadvantaged communities with story and data-gathering skills, and trains them to use video as a tool to mobilise for change.)