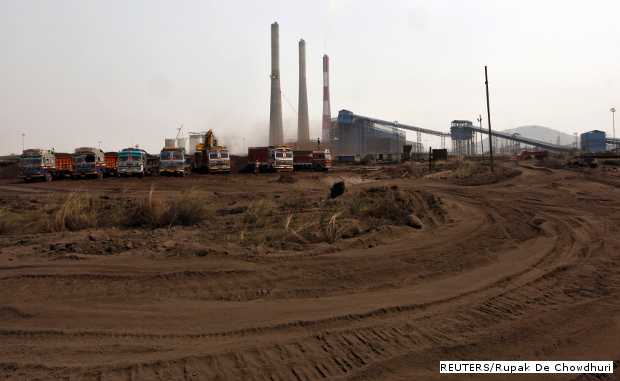 The scene at one of the delayed projects, the Jindal Power and Steel complex in Odisha

Former Environment & Forests Minister Jayanthi Natarajan’s resignation drama may be quickly receding from public memory but some of the charges levelled by her in her farewell letter to Sonia Gandhi are worth revisiting.

Ms. Natarajan claimed in the letter that she was being unfairly accused of delaying large infrastructure projects in 2013 while she was only carrying out instructions sent to her by Rahul Gandhi, Congress vice-president. The letter was accessed by the newspaper The Hindu and created a furore within the Congress party and gave the ruling BJP party additional ammunition to fling at the previous government for the economic slowdown generally and stuck projects specifically.

Looking at data from that period, it now appears that the majority of the projects stuck with the Ministry of Environment & Forests she headed in December 2013 were located in the state of Gujarat, whose Chief Minister was Narendra Modi of rival BJP, the party that came to power in the May 2014 parliamentary elections.

Data tabled in the Rajya Sabha shows that as on August 2013, of the 330 project proposals lying with the Ministry of Environment, Gujarat led the list with 52 projects.

Madhya Pradesh (MP), Chattisgarh and Punjab were the other big states with projects awaiting clearances.

MP had 15, Chattisgarh had 14 while Punjab had 28 projects stuck. Odisha, not surprisingly, is high on the list, with 25 projects stuck. Given that Punjab and Chattisgarh are relatively smaller states, the numbers seem high. Though in the case of Punjab, it would seem that most of the projects were in mining.

Gujarat incidentally was followed by Maharashtra at 44 pending project proposals and then Andhra at 34.

“Among the main reasons for slow growth during the UPA Government’s term, was delays in granting permission to projects. They used to get satisfaction by giving people trouble.”

While there may not be political overtones to the lack of clearances since things were slowing down in general across the board and different states might have had different sizes of project pipelines, it is a coincidence of sorts, particularly in the case of Gujarat which has been trying hard to ramp up its industrial activity.

Finance Minister Arun Jaitley called the episode ‘sadistic capitalism’. “Among the main reasons for slow growth during the UPA Government’s term, was delays in granting permission to projects. They used to get satisfaction by giving people trouble,” he told Times of India.

Jaitley said Natarajan’s letter “conclusively establishes” it was not the statutory or mandatory considerations which weighed on the ruling party in this report.

While the BJP mined (pun intended) the episode for its political capital, the allegations made by the former Environment & Forests Minister in her letter do place question marks on all projects gathering dust within the ministry.

Incidentally, there were four nuclear power projects in Rajasthan, Haryana and Sikkim stuck for environmental clearances too. Note that nuclear power plants by mandate can only be built by the federal Government. Former Prime Minister Manmohan Singh had campaigned hard for the cause of nuclear energy.

This article is not delving into the relative merit of each project for it is likely that some projects were genuinely environmentally more sensitive. Or may have been, like in the case of the Vedanta project, rejected by the people of the land where it was meant to come up.

(Govindraj Ethiraj is the founder of IndiaSpend and Abheet Singh Sethi is a policy analyst/research writer at IndiaSpend.)