Do students from minority communities deserve scholarships? That’s a policy question for debate but interestingly while the Centre thinks so, some states in India clearly differ or are not implementing existing scholarship schemes effectively. Meanwhile, minority or not, thousands of students in the country are going without much needed financial aid to pursue their education.

IndiaSpend’ Sourjya Bhowmick looked at the pre-metric scholarships offered by the Central Government (minority affairs ministry) to the states. Three states - Gujarat, Goa and Chhattisgarh - have failed to implement the central scheme. Incidentally, Gujarat, Goa and Chhattisgarh also have higher out-of-school minority children compared to the national average. Most other states, however, have crossed their targets and the amount released exceeds the budget estimates every year.

The pre-metric scholarship scheme was started in 2008-09. The basic idea is to encourage families from minority communities to send their children to school (reduce their financial burden by giving them scholarships). Minority students who secure not less than 50% in the previous final examination and the annual income of guardians does not exceed Rs 1 lakh are eligible for the scholarships. The Central Government gives 75% of the scholarship while the State bears the remaining 25%. Surprisingly, the scholarship is distributed on an almost 50-50 ratio between boys and girls.

Before we analyse the performance of the states, let us look at the total scholarships allotted and expenditure since inception. 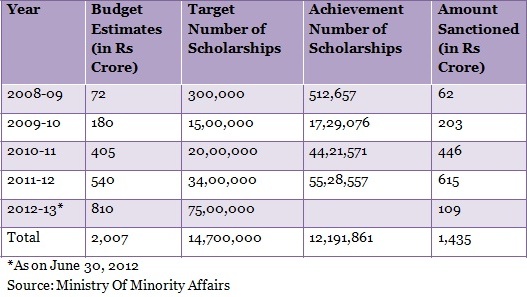 Table 2 gives the community-wise break-up of scholarships since inception till 2011-12: 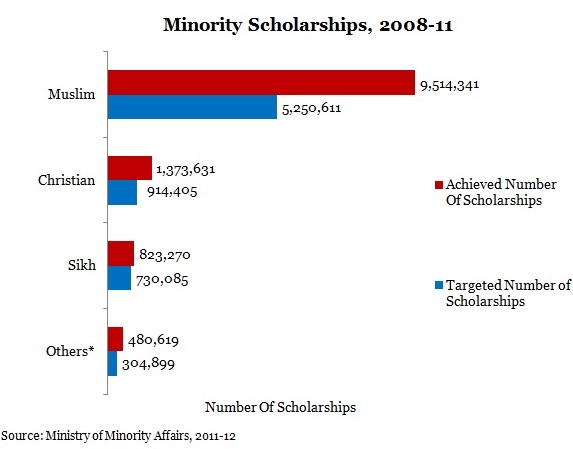 So, how are the states doing?

Table 3 gives the data of the top 10 states based on the amount disbursed to them, scholarships targeted and achieved from 2008-2012: 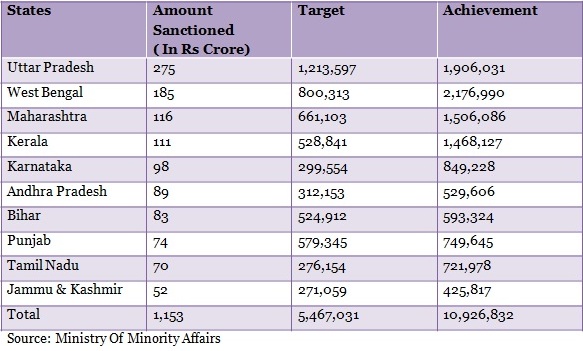 So, over Rs 1,153 crore has been disbursed to nearly 11 million students. All these states crossed their targets in awarding scholarships, which has led to revenue estimates to shoot up every year. The amount is sanctioned based on the scholarships given out.

However, there are a few states that have held back on the scholarships. The following table gives an idea:

It is clear from the table that these three states are the laggards in the programme. Out of a target of over 200,000 scholarships, only 26,696 scholarships have been given till now. And Gujarat has not distributed any scholarship till now!

Table 5 gives an idea of out-of-school children (minorities), aged 6-17 years, in these states as compared to the national average:

Table 5: No Scholarships, No Students? 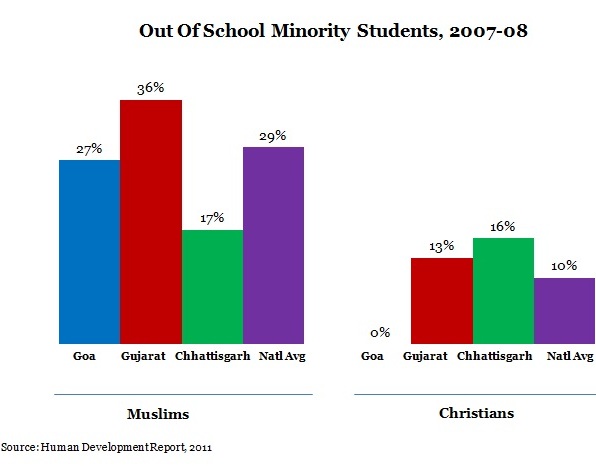 As per media reports, the Gujarat government is opposing the scheme saying it is not compulsory and that it discriminates among different religions.

So, while most states are doing well to promote education among minorities, some others are not. We are not clear about other reasons for this but the issue clearly deserves more policy debate.