Gujarat and Punjab have higher mortality rates than Maharashtra

Of the 31 states and union territories that have reported COVID-19 cases thus far, casualties have been reported in 17. All these states, except Gujarat and Maharashtra, have reported fewer than 10 deaths, and three states--Bihar, Haryana and Himachal Pradesh--have had only one each.

In Gujarat, 12 of its 144 patients have died--a mortality rate of 8.3%. This is the highest rate among states that have reported multiple deaths, our analysis of data from the health ministry shows. 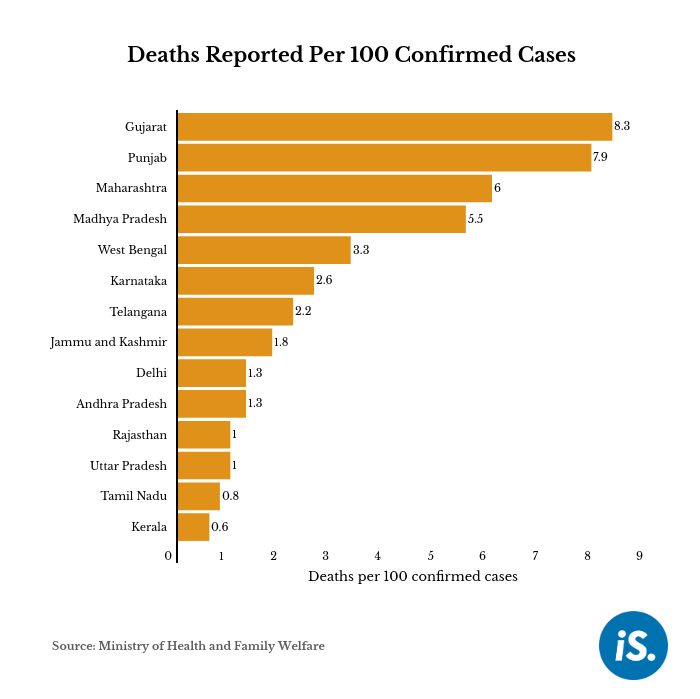 Punjab, with 76 cases (roughly half Gujarat’s case numbers) and six deaths (half of Gujarat’s), clocks a mortality rate of 7.9%--the second highest in the country. The rates in Punjab and Gujarat are over three times the mortality rate nationwide (2.6%).

Maharashtra, which has the most number of cases, has a mortality rate of 6%. Delhi and Tamil Nadu, which have more than 500 cases each, have mortality rates of 1.3% and 0.9%, respectively.

Delhi reported its first case on March 2 and Tamil Nadu on March 7. Punjab and Gujarat reported their first cases relatively later on March 9 and March 20 respectively.

The recent spurt of Tablighi Jamaat-related cases has increased the overall number of cases in Delhi and Tamil Nadu, and lowered their mortality rates. In Delhi, the cases increased by nearly 82% from 97 on March 31 to 523 today. In Tamil Nadu, the increase was 88% from 74 to 621.

The fewest patient deaths have been recorded in Kerala, 2 of 327 patients, or a mortality rate of 0.6%. Kerala was the first to report a COVID19 case in India, on January 30, 2020, and accounted for the highest or second highest number of cases until April 2 when Tamil Nadu and Delhi started reporting cases related to Tablighi Jamaat.