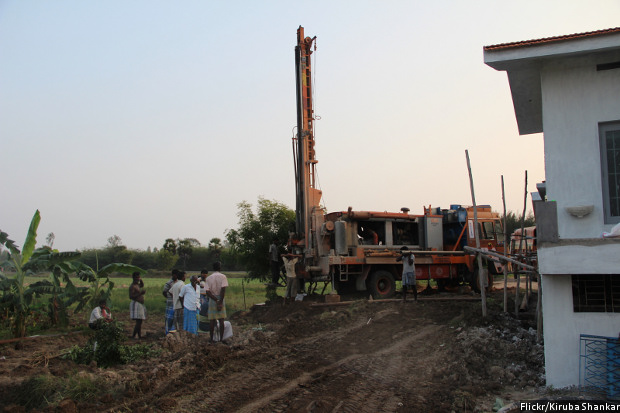 Borewell rigs are often seen in India's hinterlands, as groundwater levels plunge, with little or no chance of recharge.

Kolhapur (Maharashtra), Delhi: Five years ago, when Ramakant Desai, 55, hired a drilling rig to sink a borewell to irrigate his maize fields, he struck water at 200 ft. Today, the rig he hires must drill more than four times as deep to 900 ft.

This is a common story in Desai's village of Gargoti in the southern Maharashtra district of Kolhapur, as it is 682 km to the north in Jalgaon district's Bhusaval, where Rajendra Nad, 52, narrates a similar story, complicated by fertiliser overuse. "Overuse of fertilisers has contaminated our groundwater," said Nad, who farms millet, sorghum and groundnut.

In a country where 74% of farmland is not irrigated--Government of India's Department of Agriculture pegs it at 54%--and water shortages are growing--this report by EA Water, a water consultancy, warns India will become "water scarce" by 2025--depleting groundwater levels add to an ongoing farm crisis. In recognition of groundwater declines, Finance Minister Arun Jaitley said his government would spend Rs 6,000 crore on "groundwater management", but the details are unclear.

India draws more freshwater annually compared to any other country--761 billion cubic meters per year for domestic, agricultural and industrial use, according to four-year (2011 to 2015) World Bank data. The scarcity has worsened because more than half of that water is now contaminated, mainly by industry and sewage, sparking diarrhoea, typhoid and viral hepatitis.

A common argument is that India's growing water use in inevitable. But China, with 1.4 billion people, uses 554.1 billion cubic meters of freshwater every year--that's 28% less than India.

The consequence: India's annual per capita availability of water fell 74% over 69 years, from 6,042 cubic metres in 1947 to 1,545 cubic metres in 2011, according to this water policy report of the Delhi government.

"The political economy of subsidies has resulted in unsustainable extraction and use of groundwater and eventually to its depletion," said Ayan Biswas, a water-management expert. Farmers using cheap, subsidised electricity are encouraged to draw groundwater without restriction, he said.

Water depletion in rural India is a result of unsustainable agriculture practices, such as farms in water-scarce regions with water-hungry crops--paddy, cotton and sugarcane.

In nine states--in south, west and central India--groundwater levels are now described as "critical", according to this 2016 Parliament committee report on water resources. "Critical" implies a stage where 90% of groundwater has been extracted, with significant decline in recharge capability.

As of December 2015, of 6,607 units (blocks, mandals, talukas) assessed, 1,071 in 16 states and two in Union Territories were categorised as "over-exploited", which means 100% of groundwater has been drawn, with little chance of recharge.

Groundwater levels in India are now more critical than anywhere else on earth, IndiaSpend previously reported. More than half of India now faces what is called “high” to “extremely high” water stress, most across the fertile Ganga-Brahmaputra basin, as this graphic indicates.

Tamil Nadu and Rajasthan have the most over-exploited blocks.

More than half of India's groundwater is contaminated

The other aspect of the water crisis is contamination. Surface and groundwater are laced with fluoride, nitrate, arsenic and iron.

As many as 650 cities and towns lie along polluted rivers, which contaminate groundwater, according to the latest report of the Central Pollution Control Board.

“Poor environmental management systems” in industries lead to toxic and organic waste discharges of water, the report said. This has resulted in "pollution of surface and groundwater sources from which water is drawn for irrigation and domestic use".

Back in Jalgaon, Nad’s village is falling back on traditional methods to fight the crisis. “We are looking at reviving the watercourse, to water pooling," he said. "Hopefully these will provide water for drinking and crops during dry spells."

(Pai is a freelance journalist and a member of 101reporters.com. He has worked with the Hindustan Times, DNA for over five years, and is currently pursuing the Erasmus Mundus Masters programme in Environmental Sciences, Policy and Management at Central European University, Budapest. Mulye is a New Delhi-based journalist a member of 101reporters.com. He writes on social issues.)